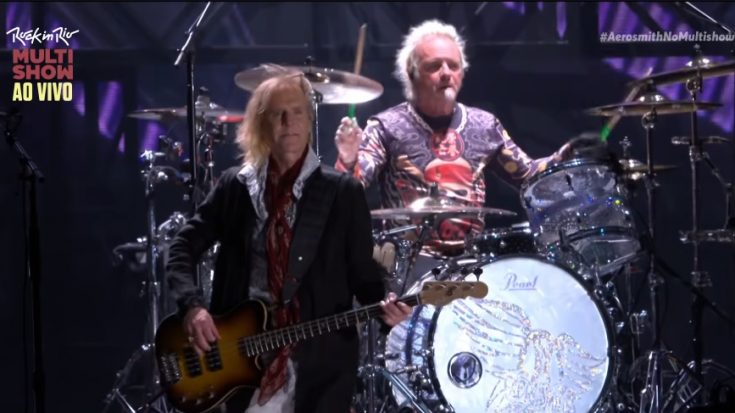 Aerosmith is on to something. While taking a break from the road, the band decided to take root in Sin City, Las Vegas. The Vegas residency of the band is set for 35 days, at the Park Theater in the brand spankin’ new Park MGM resort. Aerosmith will be sharing the venue with other big names as well, like Bruno Mars and Lady Gaga, to name a few.

However, on the eighth day of the band’s stay, fans were puzzled as to why drummer Joey Kramer was a no-show. The concern was aired on social media, with a snippet of the performance showing another person at the helm on the drum kit. Turns out, it was Kramer’s drum technician, John Douglas, saving the day by subbing for him in the Aerosmith gig.

Neither Aerosmith nor Joey Kramer himself has had any feedback regarding his absence in the show for that particular evening. But a particular thread in the AeroForce forum boards suggests tension was brewing between frontman Steven Tyler and Joey Kramer. According to forum member simonpbeck, Tyler was shooting some pretty intense stares back at Kramer while performing that night. Things escalated as Tyler was obviously provoking Kramer when he introduced him to the crowd.

Kramer recalls mistaking what he felt for heartburn or acid reflux. His physician asked him to perform a stress test to rule out anything that was potentially cardiac-related. Kramer said his echocardiogram results were better than expected for his age. But as he went for the treadmill test, something wasn’t quite right. That was when he decided to undergo angioplasty to remove the blockage. His son Jesse took his place in Aerosmith’s subsequent shows.

Yes, John Douglas played all the show. That's why I'm asking what happened with JK or if he is ok…😯 pic.twitter.com/rRJH5uC8Gj

We’re hoping the best for the lot!