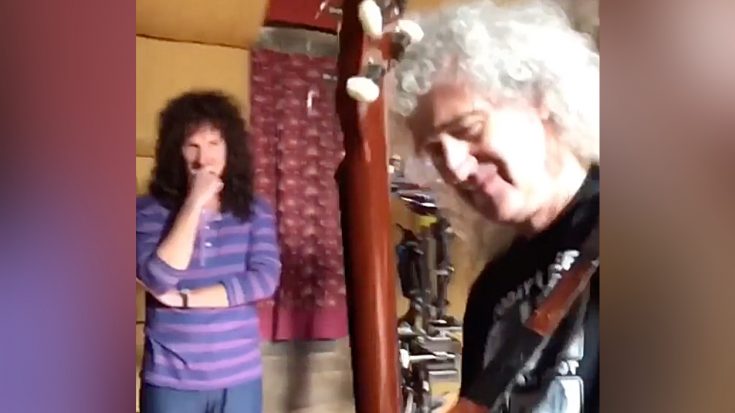 We’ve definitely talked about the critically acclaimed Freddie Mercury biopic ‘Bohemian Rhapsody’ more than enough times, but that’s only because more and more each day we learn more about the making of the film and all of the interesting stories about it.

Though the film proved to have its troubles during the its creation, we’re learning now that some pretty incredible moments occurred while on set, in particular when members of Queen were present.

The actors who portrayed Brian May and Roger Taylor (Gwilym Lee and Ben Hardy) had a huge advantage in that both Brian and Roger were able to coach the actors on how to act just like them. Not just in terms of mannerisms and speech patterns, but also musically, which is no easy task.

Nevertheless, if you saw this film you’ll know that each actor pulled it off amazingly, and that’s due in no small part to the one-on-one musical training that the actors had. In fact, one such moment was caught on camera by director Bryan Singer.

The clip you’re about to see is a rehearsal where Brian is showing Gwilym how to perform the guitar solo to “Bohemian Rhapsody”. This is a super awesome moment, don’t believe me? See for yourself!

This clip is stolen from @bryanjaysinger, who was evidently filming it on his iPhone. When the BR team were shooting this scene, I happened to be around, so Gwil invited me to have a go ! How did I do, folks ? Well, obviously not quite as good as Gwil ! He’s a trained artist ! 😊 We had too much fun ! I’d like to see the rest of what happened, captured by the film cameras which were still rolling … some day. In case you’re wondering why this solo doesn’t sound like the ‘out-take’ solo in the film, I only had the idea to make that happen later, when we were polishing the soundtrack. In any case, we wouldn’t have had the facilities to do that on the day of the shoot. In the film, you hear a variant take on the Bo Rhap solo which just MIGHT have been the one previous to the final one which made it onto the record! Might ! That’s if it hadn’t been a genius first-take keeper. Ha ha ! I honestly don’t remember ! A million thanks to @mrgwilymlee Bri