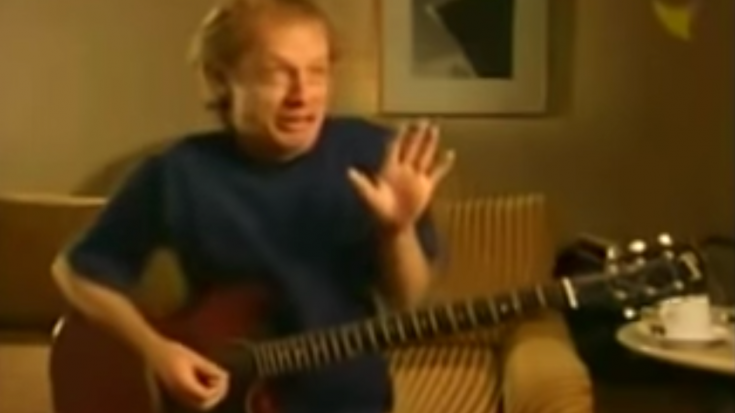 “4 Guitar Chords that Rule The Rock World” big words right? But When we talk about AC/DC, I think every rock or guitar player would know this band. No, I meant ” SHOULD” know this band. They were inducted in the Rock and Roll Hall of Fame back in 2003. In 2000, the municipality of Leganes (near Madrid) named a street in honor of the band. It was named  “Calle de AC/DC” (“AC/DC Street”). In 2003 again, The Young brothers accepted a Ted Albert Award for Outstanding Service to Australian Music at the 2003 Music Winners Awards, during which Malcolm paid special tribute to Bon Scott, who was also a recipient of the award. In 2004, a central Melbourne thoroughfare, Corporation Lane, was renamed ACDC Lane in honor of the band. They sold over 1.3 million CDs in the US during 2007 despite not having released a new album since 2000 at that point. In 2009 the Recording Industry Association of America upgraded the group’s US sales figures from 69 million to 71 million, making AC/DC the fifth-best-selling band in US history and the tenth-best-selling artist, selling more albums than Madonna and Mariah Carey.

With that kind of track record, you’re living under a rock if you don’t know who they are today. So many things named after them and this chord progression or approach are one of them. One interesting thing about the band is that when you go through their songs with some exceptions, of course, is that they basically play with almost the same four chords. And the same kind of approach in playing them with a few variations.

The chords are actually very simple. It’s basically E5, G5, D5, and A5. The structure is very simple and with this kind of structure, you can really play with its dynamics. The trick to making it sound cool like AC/DC does it is in its playing style, it’s not really alternate picking. It’s more on the syncopations in playing it. Sometimes it varies on the timing as well, sometimes some songs go off beat rhythm. With strumming, you can play from strumming the strings harder or softer. But if we really want to be more specific and experimental on its sound without really letting go of that AC/DC vibe, we can go with the sound setting in your amplifier is mixed. Any kind of amp will be fine but using a tube amp over a solid state amp would be a better choice for the dynamics. You can also use a British amp because it has that very beautiful British distortion sound in it. The gain would be up to 6 or 7, and basically, you just have to work with your volume knob to get the right mix. It somehow depends on how you attack the strings as well. But if you want to do it like what Angus does it, that’s gonna be a whole new article.

That is just a taste of what it will look or sound like but basically, this type of playing and chord progression with its variation is very useful for any kind of rock or guitar playing. Especially for composition for blues, rock, but since it’s very versatile it actually can be applied to most types of music.

With this kind of structure, the AC/DC 4 chord progression actually influenced a lot of different rock artist from early years since it was made to current times. Even with their colleagues in the business, notably, you can hear it in their works. Artists like Led Zep, Motorhead, Whitesnake, Jet, The White Stripes, just to name a random few but of course there are a ton of artist that most of us don’t even know about that was influenced by this type of approach. A specifically guitarist who might be just starting out or already have a career in music. With its versatility and its very catchy vibe, this is certainly to be one of the few iconic branded chord progression that exist today.