A Manicure Nearly Killed Ozzy Osbourne – No, I’m Not Making This Up And Couldn’t If I Tried 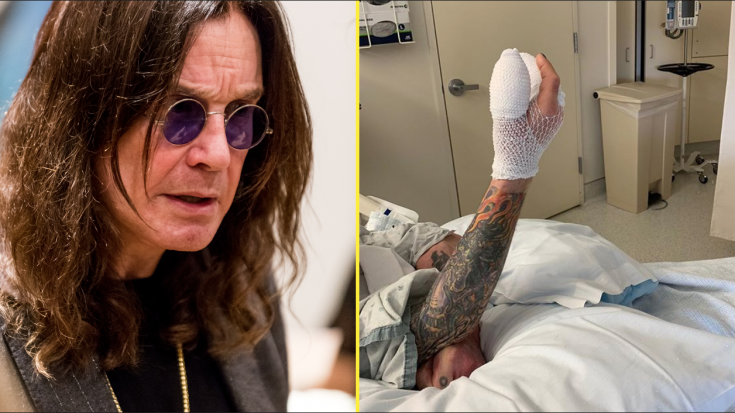 This week Ozzy Osbourne celebrated his 70th birthday, a milestone many (Ozzy included) never thought he’d reach. And given his colorful history of self-destructive behavior and decisions that can generally be filed under, “Maybe Don’t Do That?,” can you really blame them? Snorting ants, a crippling addiction to drugs and alcohol, an ATV accident – by all rights, all of these things should have killed Ozzy, but strangely enough it was an act of self-care that nearly did the rock legend in earlier this year.

Just a few months ago, Ozzy was forced to reschedule dates on his highly anticipated farewell tour (that isn’t actually a farewell tour, but that’s a story for another day)  after a staph infection landed him in the hospital.

Sat Oct 6 show at @ShorelineAmphitheatre in Mountain View, CA has being postponed due to illness. The Rock and Roll Hall of Fame inductee and Grammy®-winning singer and songwriter is being treated for an infection, which required surgery on his hand this morning (Saturday, October 6). OSBOURNE will spend a couple of days at Cedars-Sinai in Los Angeles where he’ll remain under doctor’s care as they monitor the infection. The show is part of OZZY’s North American “NO MORE TOURS 2,” produced by @LiveNation, and is expected to resume on Tues, October 9 at @MattressFirmAmp in Chula Vista before this leg of the tour wraps with shows at the @HollywoodBowl (October 11) in Los Angeles and Las Vegas (October 13) at the @MGMGrand Garden Arena. @StoneSour will perform on these three shows. The Oct 6 show has been rescheduled for Tuesday, Oct 16 (support act for the new date is TBA). Ticketholders for the October 6 show should hold on to their tickets, as they will be honored at the rescheduled date on October 16. Refunds are also available at point of purchase.

The Prince of Darkness ate all the ice cream he could stomach in between surgeries to remove the infection from his right hand, but questions remained as to how, exactly, Ozzy managed to come down with a staph infection in his hand of all places.

Now, we know; it all started with a manicure.

Before you laugh, realize that nail salons are a breeding ground for staph infections. If you’re nicked with dirty, contaminated tools or served by a technician who doesn’t follow state board mandated cleaning procedures for tools and pedicure bowls, you run the risk of contracting staph infections which, if left untreated, can absolutely be fatal.

The Sun Magazine reports sitting down with Ozzy, who gave them an update on his health and tour while he recovers.

“I’m having the best time of my life – apart from that f***ing thing with my thumb, and I didn’t realise that it was very dangerous,” he said. “I was in hospital for a couple of days and had emergency surgery, and I remember waking up in the morning and Sharon said: ‘What the f*** have you done to your hand?’

The funny thing is they reckon I got it from a manicure! It won’t stop me from heading to the UK in February.”

Unbelievable, right? Ozzy manages to survive everything he’s put his body through in the last 70 years and it’s a manicure – something people do for themselves to feel good and pamper themselves – that nearly does him in.

Either way, we’re pretty damned glad that he’s on the mend and ready to rock this New Year’s Eve!

Only 4 WEEKS until New Year’s Eve @TheOzzfest at @TheForum!! Who is coming to celebrate with us?