9 Rockstars Who Were Gone Too Soon 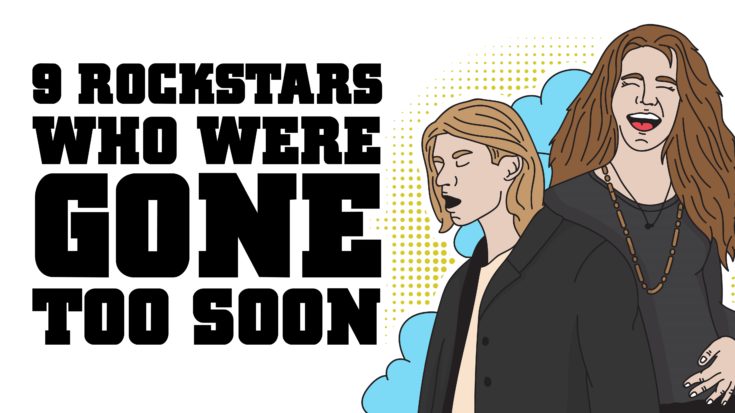 They Are Terribly Missed

These rock stars passed away before they were 30, leaving heartbroken fans everywhere. They were at the top of their game, the height of their career and yet, there’s no absolute guarantee for their longevity.

Let’s take a look at some of these beloved musicians who died far too young:

After this legendary guitarist passed at the young age of 27, there were so many speculations surrounding his death. Some of the craziest conspiracy theories say that he was killed by his manager so he could stake a claim on an insurance policy worth millions. Others claimed Hendrix was killed by the CIA and water-boarded with wine. Hendrix was once referred to by the Rock and Roll Hall of Fame as ‘arguably the greatest instrumentalist in the history of rock music.’ Prior to his untimely death, Hendrix wasn’t in the best shape. He was overworked and didn’t sleep much. On September 18, then-girlfriend Monika Dannemann found the rockstar unresponsive in her apartment in Notting Hill. He was rushed to St Mary Abbot’s Hospital but was pronounced dead at 12:45PM. The post-mortem exam revealed that he died due to asphyxia when he aspirated on his vomit. It was also found out that Hendrix was intoxicated with barbiturates.

Janis Joplin already had a long struggle with substance abuse before her tragic death on October 1970. John Cooke, Full Tilt Boogie’s road manager, was the one who discovered Joplin in her room on the floor near her bed at the Landmark Motor Hotel. Producer Paul Rothchild called him up since he was concerned because Joplin failed to show up for the recording session. The official cause of death was accidental heroin overdose. According to Cooke, it’s possible that her supplier handed her a more potent heroin since other customers also overdosed all within the same week. Her sister, Laura, added: “The dope Janis had bought that Saturday was four to ten times stronger than normal street heroin. It was 40 to 50 percent pure.” In her will, she set aside $2500 as funds for a wake party in case of her death. Her body was cremated and her ashes were scattered over the Pacific Ocean.

Jim Morrison was highly unpredictable as evidenced by his crazy stage antics. He was also controversial on stage and out of it. But it was a huge surprise to his fans and the rock scene in general when he was found dead in his bathtub in Paris. It was his then-girlfriend Pamela Courson who found his body in the apartment they both shared. The official cause of death was ‘heart failure’ but there was no autopsy performed which is why Morrison’s death is surrounded by mystery and speculations. In fact, there are those who claim he staged or faked his death and he’s been alive all this time, living in seclusion. Others even went so far as to say they spotted him. There were also people who said he was killed by heroin, a bad batch was given to him by supplier Jean de Breteuil. Nevertheless, only one thing’s for sure – rock music lost a legendary frontman and vocalist.

This is perhaps one of the most controversial deaths in the history of rock. On April 8, 1994, he was found dead in his home in Seattle, Washington by an electric installer (the employee was there to install some security lighting) but forensic analysis confirmed that his suicide (with self-inflicted gunshot wounds) happened three days earlier, on April 5. Prior to this, Kurt Cobain checked out of rehab and was also reported by his wife Courtney Love as suicidal. The Seattle Police Department released a report saying, “Kurt Cobain was found with a shotgun across his body, had a visible head wound and there was a suicide note discovered nearby.” But even so, speculations started to arise with one claim made by a private investigator hired by Love saying she had him murdered. However, according to Cobain’s cousin Beverly, it was his struggle with substance abuse and bipolar disorder which ultimately propelled him to commit suicide.

On October 1978, Sid Vicious woke up to find his then-girlfriend Nancy Spungen’s cold body with a stab wound in her stomach on the bathroom floor of their hotel room in Manhattan, New York. The two had a destructive relationship. He was arrested and charged with Spungen’s murder. Vicious’ version of the story changed every time – he once said, “I stabbed her, but I never meant to kill her” but he also claimed that she fell onto the knife. Ten days after her death, Vicious smashed a light bulb and used a piece to slit his wrist. After he was hospitalized, he tried to jump off the window. A few months after Spungen’s death, on February 1, there was a small party held for Vicious after undergoing a detoxification program. However, he asked his friend for some heroin. At midnight, he died from overdose. His mother claimed to have found a suicide note that said, “We had a death pact, and I have to keep my half of the bargain. Please bury me next to my baby. Bury me in my leather jacket, jeans and motorcycle boots. Goodbye.”

Randy Rhoads was a beast in the guitar. However, it was reported that the legendary guitarist had a fear of flying. His final show was at the Knoxville Civic Coliseum on March 18, 1982. The following day, he was on his way to an outdoor festival called ‘Rock Super Bowl XIV’ in Orlando, Florida and he was travelling with his band, Ozzy Osbourne. They stopped by Leesburg and while Ozzy and Sharon slept on an adjacent tour bus, Rhoads along with Rachel Youngblood and Andrew Aycock went on a joy ride using the Beechcraft Bonanza. Aycock had an expired pilot’s license and he made around two passes to ‘buzz’ the sleeping band members. On the third one, the plane’s wing clipped the top of the bus causing it to spiral out of control. It then hit a pine tree before finally crashing into the garage of a nearby house. Rhoads, Youngblood and Aycock were killed instantly. All bodies were unrecognizable and Rhoads was identified with the jewelry he wore. In an interview with Guitar Player, Ozzy shared: “We loved each other very dearly. I swear to God, the tragedy of my life is the day he died.”

A few months after the release of the Allman Brothers Band’s first live album, At Fillmore East, the group took a break from all the recording and touring. Allman was driving high speed on his Harley-Davidson Sportster in Macon, Georgia. As he was nearing Bartlett Street, a flatbed truck suddenly stopped at the intersection. He swerved sharply to avoid it which caused him to lose control of his motorcycle. It skidded before finally turning over. It landed on Allman, pinning and crushing him, as it traveled again for more than 50 feet. Reports said that while he was transported to the Macon Medical Center, he stopped breathing twice and for both times, he was revived by mouth-to-mouth resuscitation. He had to undergo emergency surgery but because of the massive internal injuries he sustained, Duane Allman died after three hours.

A few weeks after he was dismissed from Rolling Stones, Brian Jones was discovered motionless and floating face down in his swimming pool at Cotchford Farm. Anna Wohlin, his Swedish girlfriend, was the one who found him. She pulled him out and believed he was still alive since she claimed she could still feel his pulse. He was eventually pronounced dead and his official cause of death as stated by the coroner’s report said “death by misadventure.” Because of his substance abuse (both drugs and alcohol), his heart and liver were heavily enlarged. Some people aren’t convinced that it was an accident. Wohlin claimed that handyman Frank Thorogood had something to do with it saying, “I don’t know if Frank meant to kill Brian – maybe it was horseplay in the pool that went wrong. But I knew all along he did not die a natural death. I’m still sure of it.”

Born: February 10, 1962
Died: September 27, 1986
Age: 24 years old
Metallica was at the top of their game that year. On that tragic night in September, the band was touring and Cliff Burton and Kirk Hammett drew cards to decide who gets to choose their bunks. Burton won with the Ace of Spades and Hammett said, “I said ‘fine, take my bunk. I’ll sleep up front, it’s probably better anyway.’” Before 7AM the following morning, the band woke up when the bus skidded off the road and careened from side to side. According to the driver, he hit a patch of black ice. When it flipped over, Burton was thrown out the window and the bus landed on top of him. The young musician died at the scene. James Hetfield claimed he tried looking for black ice on the road but found none. Investigations, however, cleared the driver for any charges.