These 10 Hottest Men In Rock Are Better Than Your Boyfriend 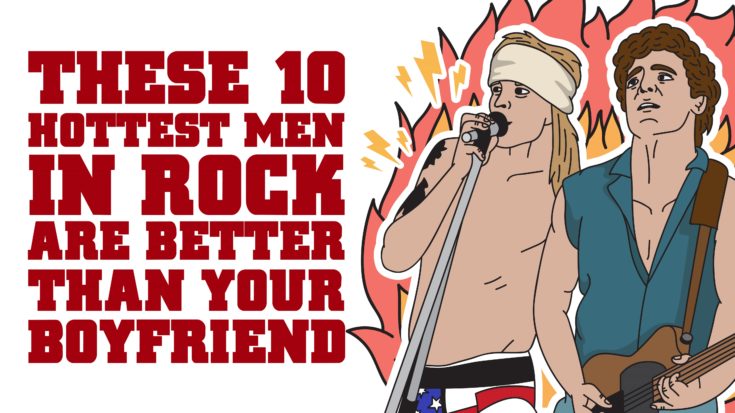 In rock, we can find some of the sexiest, hottest men who ever walked the earth. We love them because they’re more than just a bunch of pretty faces – they are dripping with talent too. And some of them are even multi-instrumentalists – talk about triple threat! Okay, we hope you won’t forget to breathe.

At the top of their game, these two were scorching hot. Slash with his mysterious vibe. Every girl digs his style – all-black ensemble complete with a top hat and cigarette as he shreds his way to your icy, cold heart. We bet you had huge posters of him in your room – he has that ultimate bad boy look, the kind you used to drool over in high school. You were probably jealous of that girl in the photo with him in his hotel room. Some chicks just have all the luck! Axl Rose, on the other hand, doesn’t need any explanation why girls are following him around. He had that golden mane everyone can only dream of – seriously, the guy probably has never had one bad hair day in his life. And of course, he’s the frontman of one of the greatest rock bands on earth. Going to their concerts was like a date with these two beautiful creatures.

Jon Bon Jovi is a lot like fine wine – he only gets better with age. Just when we thought there’s no way he can look so much hotter than he did in his “Please Come Home For Christmas” music video with Cindy Crawford, we saw him again in the 2011 film “New Year’s Eve” starring opposite Katherine Heigl and well, she even described their make out scenes as “nerve-racking.” We totally get you, girl. Not that we’d actually know the feeling but we can only assume (and wish we were you. Lol). This man is blessed with oozing sex appeal. You can only imagine how it feels like to stand at the front row during his concerts – it’s like you’re blessed with the sheer presence of this godlike being. And as it happens, he has a big heart too – okay, who wouldn’t fall in love with him? He’s THE complete package!

Did you have any of those times when people asked you why you were single and all you could think of was David Bowie wearing a crisp black tuxedo and his gorgeous smile? It was because of him and his Jareth the Goblin King character in “Labyrinth” that single-handedly caused your sexual awakening. And besides, who doesn’t like a guy with a penchant for fashion? His iconic style changed the world. He can wear a tight pantsuit or a sheer sparkly top and he managed to look hands-down amazing in both. How is this even fair? He was so fearless and a real risk-taker and you’d be lying if you say those things don’t add to his hotness. And whenever he was with his wife, Iman, they looked so good together you didn’t know if you should eat a tub of ice cream while ugly crying. Okay, now we’re terribly missing him again.

In the ‘80s, he was every girl’s dream guy. Even today, at 67 years old, he looks incredibly good. We’re crushing on him all over again! He’s always had that boy-next-door vibe (not that we’d mind that one bit!) and the way he smiles and smolders – don’t even get us started on those perfectly-shaped muscular arms. And he owns some pretty fancy rides too – like he’s always ready to pick you up and drive you around town. Oh, sorry. Are we daydreaming again? Yeah, well we tend to do so whenever we see some of The Boss’ photos which are too hot for any mere mortal to behold. It made us thankful for the gift of sight and well, we can only sigh. What have we done to deserve someone like Bruce Springsteen? He became our standard for what boyfriends should be like – and he’ll always be our imaginary ex. Lol.

When a guy is as talented as Mick Jagger (who can bust some serious dance moves), only one thing is bound to happen – fall in love. On stage, he was a big ball of energy. But when he’s attending parties or strolling around, he was one heck of a fashion icon. Any guy who can pull off wearing wool sweaters and all-teal suit is hot in our book. Mick Jagger had a big and wild personality and that’s probably why he’s widely considered as one of the greatest frontman in rock. And he’s also a certified chick magnet. If you need any proof, Jagger’s 29-year old girlfriend (he’s 73, by the way) recently gave birth to his eighth child. Yes, ladies and gentlemen, this legendary rocker still has it. He obviously still hasn’t lost his appeal and well, we can only assume his flirting game remains just as strong too!

What is it about these rock stars and their gorgeous mane? In between heavy shredding and singing, James Hetfield in the ‘80s also had to struggle against the wind blowing his beautiful hair. But you know what makes him one of our ultimate crushes? Well, it’s his strong, powerful voice. When he starts screaming “Yeah, yeah, yeah,” we can’t help but imagine how our names would sound on his lips. So basically, he’s the main reason why it’s so hard to find a boyfriend. Then again, who needs one when you already have this fine specimen of a man? Who needs a date when you can just buy tickets to Metallica’s concert and enjoy an entire night of musical bliss? And then maybe, just maybe, he’ll meet your eyes mid-performance. Okay, that’s a bit of a stretch but every girl can dream, can she not? And anyone who’s been to their gigs is probably wishing that as well.

There’s always something incredibly sexy about a guy wielding a guitar. Vocalists are often the most popular member in every rock band which is why there’s an air of mysteriousness for the one by the side, shredding away. And Nuno Bettencourt is the stuff of our girlish dreams. He is like the epitome of masculine perfection. Imagine him trying to serenade you with “More Than Words.” Now, isn’t that the most romantic thing ever? Of course, you wouldn’t like today’s setting of texting each other and meeting up. It’s always nice the old-fashioned way, right? Like maybe, he can compose a love song just for you? Then every time he plays it, the world knows it’s specifically dedicated for you? No amount of diamonds can even top that (but maybe, it depends on what kind of diamond, lol). Seriously, he’s 10x better than a real boyfriend. We’re choosing him over anyone.

You probably noticed by now that most of the men on this list are legendary axemen. We told you earlier, it’s sexy when they know how to play the guitar – even more so, if they’re so dang good at it. With his short, curly hair and bare chest, it makes us wonder how anyone could actually concentrate on his playing during concerts and shows. It’s like you feel blessed to be in the presence of a rock god. That somehow, he has granted your wish to witness greatness. Even with his white hair, Brad Pitt or Johnny Depp cannot hold a candle to THE Jimmy Page. There’s just too much sexiness going on. To say he looked mighty fine in his youth is a major understatement. He looked every inch a rock star. Of course, he had his wild days during those times. Then again, who didn’t enjoy the perks of their fame?

Golden voice, luscious locks, seductive moves – what more can anyone want? Robert Plant is more than oozing talent and confidence, he’s one of the hottest men in the music industry too. He’s so dang easy on the eyes and we don’t mind staring at that ethereal face all day long. It’s like when you’re watching him, you think: “How would my future husband measure up to this guy’s godly features?” Just for the record and also to avoid any possible disappointments in the future, there is NO ONE who can come close to Robert Plant. You just want to shower him with a whole lotta love, right? Lol, we just had to put it in there. Whoever grew up listening to Led Zeppelin would agree that girls love him and guys want to be like him. Who can blame them? He’s got everything you want in a rock star – we repeat, everything.

Paul McCartney always had that charming, boyish appeal that we love. There’s an air of innocence about him that’s probably the reason why girls are crazy about him. And we’re talking about the same guy who’s a member of one of the most iconic bands in the history of rock ‘n roll. Besides, he’s more than just good looks, he’s also a brilliant songwriter and a multi-instrumentalist at that. He looks like everyone’s first crush and first love. And his photos with his wife Linda prove just how loving he is. The way he stares and smiles at her – it’s the kind that can melt any cold, hardened heart. And do you know what he said about their first meeting? “As she was leaving… I saw an obvious opportunity. I said: ‘My name’s Paul. What’s yours?’ I think she probably recognised me. It was so corny, but I told the kids later that, had it not been for that moment, none of them would be here.” We don’t know about you but we think that’s actually pretty cute.