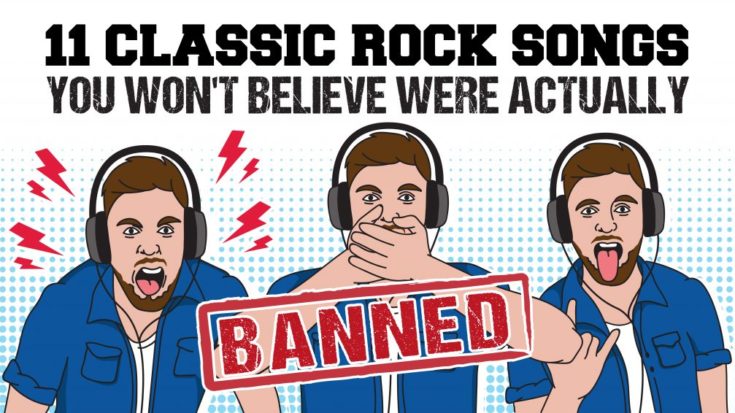 Whether it be the typical grounds for censorship like sex, drugs, violence, or something offensive or sensitive, rock songs have almost become synonymous with breaking the rules. These songs have been banned from radio, television, charts, and record stores during the time of their release. The reasons why some of these songs were held from public consumption may be more surprising than you think!

The Beach Boys are pioneers in radio music history. Their song “God Only Knows”, released in 1966, is the first single to ever use the word “God” in the title in a non-religious context. That was also the very reason why the single was banned from the radio for “blasphemy”. Even if the song is a soft ballad off The Beach Boys’ album “Pet Sounds”, during the conservative early 60’s, it was still unacceptable to use religious references in secular songs. British songwriter Tony Asher who co-wrote the single explained in the liner notes of the album,

“I really thought it was going to be everything it was, and yet we were taking some real chances with [the song]. First of all, the lyric opens by saying, ‘I may not always love you,’ which is a very unusual way to start a love song.”

The Who‘s single “My Generation” was banned for having a certain offensive “F” word in the lyrics – “Fade”. Yup, it wasn’t what you might’ve thought.

In the middle of the chorus of the song, lead singer Roger Daltrey stutters some words for effect, singing the word ‘fade’ like “Why don’t you just f-f-f-f-fade away.” In 1965, BBC felt it was offensive…to stutterers. The song was pulled out from major radio playlists but other pirate stations still played the song. Eventually, the “banned” single became a hit to UK listeners and BBC relented. The song ended up making it to #2 on the UK charts despite it being initially deemed offensive.

“Lola” is one of the most controversial songs of the 1970’s. The lyrics tells a story about a person named Lola who “walked like a woman and talked like a man”, allegedly referencing to an encounter between the narrator in the song and a possible transvestite in a West London club. But that’s NOT the reason why the song was banned in the U.K.

There is a line from the verse of the song that references to the commercial brand “Coca-Cola” (because what else rhymes with “Lola”) and that wasn’t permitted in BBC’s airplay guidelines at the time. The lyrics were then changed from “Coca-cola” to “cherry cola” instead. Though the U.S. did proceed with banning The Kinks from performing in the country for about four years because of the band’s breaching of some social norms. It all turned out well anyway for the “banned” tracj as it has since become one of The Kinks’ most iconic and popular songs, hitting no. 9 on the U.K. charts, then later ranking 442 on “Rolling Stone’s 500 Greatest Songs of All Time”

The Sex Pistols pulled off one of the most rebellious acts in music industry history when they released their single “God Save The Queen”, blatantly mocking the British national anthem with the same title, as well as the English monarchy. The release of the single was intended to be on the same day of Queen Elizabeth II’s Silver Jubilee commemorating her 25th year of reign on the throne. The single was so widely politically condemned that the British parliament threatened to ban all forms of sales of the song, while press outlets called for the public hanging of the band because of their treason. Even with the taboo label on the song, “God Save The Queen” still became an anthem for the English rebellious punk movement, selling up to 150,000 copies a day! The band even went so far as to attempting to blast the controversial single on a boat on the River Thames while the Queen’s Silver Jubilee parade passed on by. The stunt was thwarted by the British police before it even took place.

5. ‘Let’s Spend the Night Together’ – The Rolling Stones

The lyrics to “Let’s Spend The Night Together” suggests a straight up sexual tone between an unmarried male and female, or so that was what the morally conservative media in the late 60’s assumed. Hooking up was a flat out no-no back in the day. The “suggestive” lyrics pulled the single from major broadcasting outlets but more popularly, it caused quite a riff on the Ed Sullivan Show. In 1967, the Stones were told by Sullivan’s production team to change the lyrics of the song to “Let’s spend some time together” just before going on stage. Mick Jagger initially did not want to compromise but eventually relented when Sullivan himself reportedly told the band “Either the song goes, or you go.”

Still, the band maintained their protest to the lyrical change by rolling their eyes every time the changed lyric was sung. Midway through the performance, Jagger gave up on the restraint and sung the real lyrics anyway. The small act of “rebellion” caused The Rolling Stones to banned from ever performing on Sullivan’s family-friendly show altogether.

Watch Mick Jagger rocking that eye-roll on the Ed Sullivan Show at 1:18 in the video below:

Van Morrison‘s first ever single as a solo artist was originally titled “Brown Skinned Girl”. This classic song was about a then-illegal interracial relationship between a presumably white man and the titular character. Before its release, Morrison changed the title and lyrics to “Brown Eyed Girl” to avoid the legal controversy (particularly in America’s southern states). Many radio stations banned the song anyway for the “suggestive” line at the end of the song’s third verse “making love in the green grass”. To make it more radio-friendly, the line was overdubbed with an edited version changing it to “laughin’ and a-runnin’, hey, hey” instead. The song eventually became Morrison’s signature track, hitting No.10 on the Billboard charts. Classic rock stations today plays the song frequently over the decades.

Now known as one of The Rolling Stones‘ most famous chart toppers, “I Can’t Get No Satisfaction” was pulled out from radio playlists in 1965 for having “sexually suggestive” lyrics. The Rolling Stones faced much criticism for the song’s “sexual innuendo” and statements against commercialism. Newsweek even wrote that the single was “full of tasteless themes” following the nationwide radio ban of the song. ABC’s variety show “Shindig!” even bleeped out the line from the song “trying to make some girl”. The band’s label even had sound engineer Dave Hassinger try to cover up the lyric in post production, saying

“They kept telling me to bring the voice down more into the track. I thought they were crazy. I didn’t know it had to do with the lyric and getting radio play.”

Ironically, 40 years after the song received much controversy, “Satisfaction” was the ONLY song that wasn’t censored among the performances during the February 2006 Super Bowl half time show. Oh how times have changed!

“Hey Joe” is one of the earliest singles of The Jimi Hendrix Experience and it involves a sort of glorification of negative themes such as murder and violence. While the violent subject matter did get the song banned from various radio stations, and also after the 9/11, the most historical incident regarding the banning of Jimi Hendrix was his live performance…or non-performance of the song on the BBC TV show “Happening For Lulu”. In 1969, Hendrix was supposed to sing their U.K. hit as a duet with pop singer Lulu during their appearance on her show. Well, the band actually cringed at that idea and took the performance in their own hands by playing the first two minutes of the song but stopping abruptly mid-way. Hendrix then went on and announced to the live audience,

“We’d like to stop playing this rubbish and dedicate a song to Cream, regardless of what kind of mood they may be in, and dedicate this to Eric Clapton, Ginger Baker, and Jack Bruce”.

The band went on to tear through the cream classic, “Sunshine of Your Love”, apparently playing out the show as the studio director signals for the band to stop. That stint earned them a ban from playing at the BBC ever again. And Hendrix ain’t sorry about it one bit.

Check out the footage of their naughty antics below:

9. ‘Lucy in the Sky With Diamonds’ – The Beatles

When The Beatles’ eighth studio album Sgt. Pepper’s Lonely Hearts Club Band was released in 1967, BBC screened it and immediately banned the now-iconic song “Lucy In The Sky With Diamonds” from being played on the radio due to implicit drug references starting with the title. The song title forms the acronym LSD, which is also the acronym for the hallucinogen Lysergic Acid Diethylamide or simply known as “acid”. The Beatles have been notorious for writing songs while on chemically-induced psychedelic explorations, evident in their lyrics such as “hey, pot” “incredibly high” “head in the clouds” or the non-sensical “I am the walrus, Coo coo kachoo ka coo coo kachoo”. John Lennon, however, always insisted that the song had nothing to do with drugs and was only inspired by his four-year-old son’s drawing of his school friend named Lucy.

Neil Young’s song was banned by MTV for attacking the music industry and corporate America. In a very Neil Young -way, the music video stands against commercialism in the industry by jabbing at major brand names and even huge pop stars at the time such as Whitney Houston and Michael Jackson. After Jackson’s attorneys threatened legal action, MTV put a stop to playing Young’s music video. Canadian music channel MuchMusic, however, continued to air the music video until it became a hit. Young wrote in an open letter to MTV, “What does the M in MTV stand for – music or money?”, accusing the powers-that-be of the channel as “spineless jerks”. In the most ironic and hilarious dramatic twist of events, the same “controversial song” actually won the MTV Award for Video of the Year in 1989.

John Lennon‘s best loved iconic ballad talks about love and peace, so how could it have been banned at all? It was actually banned by different industries for different reasons.

Because it contains the line “imagine there’s no heaven…and no religion too”, some churches in the U.K. has forbidden the song to be sung at funerals as it was offensive to the notion of life after death. Religious schools have also banned the song to be sung by young students stating that the lyrics were aesthetic and subversive. What’s more ridiculous is that a US senate bill written by republican candidate Senator Lee Tiralo was tabled to ban Lennon’s classic to be played on major media outlets for having ‘inflammatory lyrics’ with a potential to ‘stir up major political conflicts’.