13 Most Romantic Rock Songs of All Time 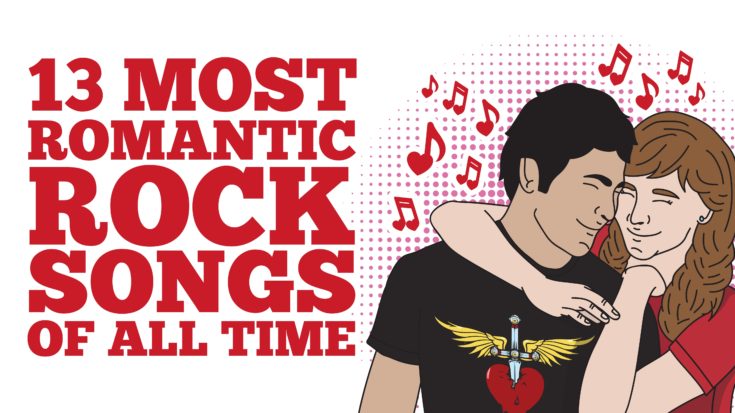 There you have it, ladies and gentlemen, the proofs that even rockstars know a thing or two about love. Besides, it’s never too early to start making your Valentine’s Day playlist, right?

Favorite lines:
“…And the truth is baby you’re all that I need
I want to lay you down in a bed of roses
For tonight I sleep on a bed of nails…”

You’re lying if you tell us you don’t know the lyrics to this song by heart. We fell in love with this track ever since the first time we heard it on the radio and we haven’t moved on since. Maybe it’s the rhythm or the drawn out riffs or the soft sound of the piano or even Jon Bon Jovi’s powerful vocals – no matter what it is, there’s no mistaking this is one great ballad, almost like an anthem. JBJ actually wrote this while he was suffering from hangover. Man, there’s so much emotion here. And if you like this, wait until you hear the Spanish version called ‘Cama de Rosas’ – it will blow you away for sure.

Favorite lines:
“…I could spend my life in this sweet surrender
I could stay lost in this moment forever
Every moment spent with you is a moment I treasure…”

You know, we could actually just quote the entire track because everything is beautiful and poetic. Imagine if you got married to this song, it’s packed with so many emotions you just long to feel the same way again. It’s a real masterpiece and one that we like listening to over and over again. There’s something about this power ballad that hits home and gives you the feels. It could be Steven Tyler’s raspy voice or the music video (which still looks awesome and cool years later) – but dang, it’s magical. You know that song that makes you feel like crying for no reason at all? Well, this is it. It’s going to move you to tears and it won’t be easy to get over it.

Favorite lines:
“…Your pride has built a wall, so strong that I can’t get through
Is there really no chance to start once again?”

Even if you’re not going through a heartbreak, listening to this somehow channels the pain of the narrator. The anguish and regret are so raw and it feels like you’re there – witnessing the end of a relationship. We remember singing this song back when it first aired on the radio. We’re also guilty of belting out to this in the shower! Guitarist and founding member Rudolf Schenker told SongFacts, “It’s a story about a love affair, where they recognized it may be over, but let’s try again.” It’s painful to hear the plea like he wants to get back with her so badly and he’s willing to do anything. The words are lovely but the vocal performance, even more so. It’s a veritable piece of art.

Who would have thought that The Beatles’ greatest love song would be written by neither Paul McCartney nor John Lennon – their two primary songwriters? It was George Harrison who’s responsible for this masterpiece and it was supposedly written for his wife Patti Boyd. It was the finest work of this Quiet Beatle and it paved the way for him to step out of the shadow of Lennon-McCartney. The first line came from a track by James Taylor. Harrison shared, “I could never think of words for it. And also because there was a James Taylor song called Something In The Way She Moves which is the first line of that. And so then I thought of trying to change the words, but they were the words that came when I first wrote it, so in the end I just left it as that, and just called it Something.”

Who said heartaches are always bad? Take it from Fleetwood Mac – they took their pain and made it their motivation to create some of the finest works for their powerhouse album, Rumours. By now, we’re already too familiar about the drama between Stevie Nicks and Lindsey Buckingham. At the time, John and Christine McVie’s relationship was also on the rocks. Christine wrote this song about his affair with Curry Grant, the band’s lighting director. At first, she told John this was inspired by her dog but he eventually found out who it was for. We like how melodic this is! And if there’s any lesson we can learn here, it’s that love is never easy, it’s always complicated.

Favorite lines:
“…And when your fears subside
And shadows still remain
I know that you can love me
When there’s no one left to blame…”

Just when you think you couldn’t love Axl Rose and Slash way more. When Guns ‘n Roses released this power ballad, we knew we just witnessed Axl Rose’s magnum opus. It was like a punch in the face for all the doubters and haters. Who would even associate these bad boys with something romantic? And yes, the music video is mesmerizing too, it always gets us thinking in the end. And it’s somehow manages to collectively break our hearts. Nonetheless, we like putting this on repeat no matter what month it is. It’s great to listen to even in December. Lol! We don’t even mind that it’s more than seven minutes long. If it’s as good as this, we’ll have to say: “Keep ‘em coming.”

“…Ooh, you make me live
Whenever this world is cruel to me…”

To be honest, we were torn between this and ‘Love of my Life.’ In the end, we had to go with this one – written by bassist John Deacon. This track was inspired by and dedicated it to his wife Veronica Tetzlaff. According to him, “Well, Freddie didn’t like the electric piano, so I took it home and I started to learn on the electric piano and basically that’s the song that came out you know when I was learning to play piano. It was written on that instrument and it sounds best on that. You know, often on the instrument that you wrote the song on.” It’s beautifully written and you can’t help but remember your loved ones – best friends, parents or even your favorite pet. It’s one of the songs that easily makes you smile whenever it’s on.

It’s all in the title. Imagine this scenery: you’re alone in your room, surrounded by heaps of clean blankets and big pillows. You have a cup of hot chocolate in your hand and you’re staring at the window where you can see the rain outside. And of course, you play “Love Conquers All” at maximum volume in the background. We get all sorts of ‘feels’ with this one. Some think it’s a bit cheesy but we strongly disagree. It’s a great song, it’s sublime and we love everything about this ballad – from the rhythm to the melody. Sure, the lyrics aren’t perfect but hey, it’s a wonderful track. Besides, can you hear Ritchie Blackmore’s guitar screaming? Yep, that’s like the cherry on top. Anything with Blackmore’s solo easily becomes our favorite.

“…If the sun refused to shine, I would still be loving you.
When mountains crumble to the sea, there will still be you and me…”

This is one of those times when we let the song speak for itself. It’s beautiful in every way and we love how poetic it is. Reading the words, you’d think this is someone else’s note for his lover. But no, it’s a Led Zeppelin song – the very same band who gave us tracks that packed a lot of punches. This was Robert Plant’s tribute to the inspiration behind this classic – his then-wife Maureen. This is the band’s gift to the world. If somebody sang this to you, you’d be weak in the knees. We actually get butterflies in our bellies while listening to Plant. Anyone would love to be serenaded by this. There’s something exquisite, magical and intimate about the whole song.

“…Baby, I’m amazed at the way you love me all the time,
And maybe I’m afraid of the way I love you…”

Can we just take a moment to appreciate just how good Paul McCartney’s vocal performance is? That raspy voice is everything! McCartney wrote this piece for the love of his life – Linda. She helped him during one tough phase – the breakup of The Beatles. The love between them is just inspiring. From the songs to the photos – you can clearly see how much they meant to each other. This track though, it’s the ballad that trumps everything else. It’s often regarded as one of his finest works and we totally agree. McCartney said so himself that this is “the song he would like to be remembered for in the future.” While we love the recording, this live version is on a different level. Yes, we are amazed.

Just in case you need something to take your breath away, this is it. This track just never grows old. You can even ask those who aren’t fans of classic rock to sing along, and we bet they know all the words (and probably even the guitar part!). It’s one of those songs that never fail to make you smile and cheer you up. It gives you that feel-good vibe and man, don’t even get us started on the harmonies. We love how simple this is too – two voices and an acoustic guitar. Perhaps this is what people refer to as ‘less is more.’ It’s neither loud nor showy. It doesn’t overwhelm your senses. According to Nuno Bettencourt, “The first time we knew it was a hit was actually when Sebastian Bach told us.”

This is one of the best musical pieces classic rock has to offer. When we think of ‘love songs,’ it’s hard to skip this one out. Any way you look at it, it’s beautiful. It’s the kind of stuff you want to listen to whether you’re in love or not. If by any chance, you don’t like this – then there’s probably something wrong with you. Lol! But seriously, Steve Perry’s golden pipes bring so much magic to this track – not to mention how much heart and soul he pours every time he sang this. And we’re pretty sure after hearing this, it always reminds you of someone. The story behind the lyrics is about a ‘music man’ and his relationship with his lover. There are challenges in staying faithful but take it from Perry when he reassures, “I’m forever yours… Faithfully…”

This is one of the reasons why we’re thankful we grew up in an era when music was as real as it can get. You may hear this every day but it’s true, they don’t make it like this anymore. The fact that this power ballad is an enduring hit speaks volumes. According to Mick Jones who wrote and composed it, “I always worked late at night, when everybody left and the phone stopped ringing. “I Want To Know What Love Is” came up at three in the morning sometime in 1984. I don’t know where it came from. I consider it a gift that was sent through me. I think there was something bigger than me behind it. I’d say it was probably written entirely by a higher force.” Yes, indeed. It’s a gift we are grateful for.