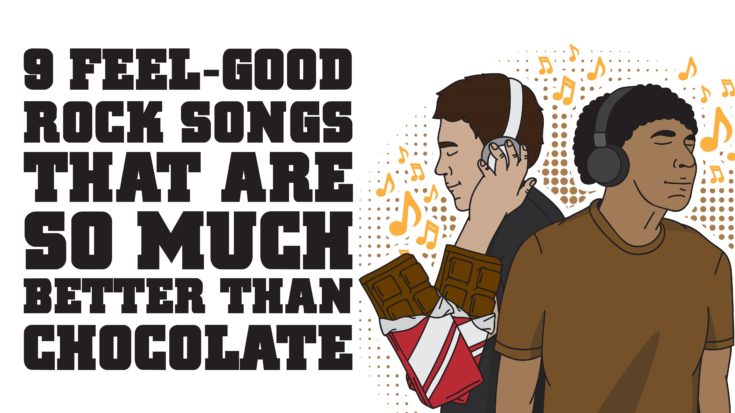 These songs are surprisingly light and gives you that feel-good vibe. Who said rock is always about angst, hatred and sadness? And yes, it’s better than chocolate or even your favorite dessert. And it’s non-fattening too so yes, you can indulge as much as you want.

Sometimes, all you need is an insanely good, face-melting guitar solo. It’s so eargasmic, you wouldn’t want anything else – at least in the food or sweets department. Lol. There’s just something so raw about this – and you can totally feel their ‘hunger’ back then. We like The Kinks’ version too but this is on another level (there were rumors that Led Zeppelin’s Jimmy Page was the one who recorded the solo but Page denied it and so did the track’s producer). Besides, The Kinks’ rendition had a laid back feel to it, this on the other hand, might make you feel like shredding on your air guitar. Sure it’s not exactly the cheerful kind of music but dang it, it makes you feel so good while listening to it (gyrating like David Lee Roth is totally acceptable). The tone is way too awesome and overall, it’s one of Van Halen’s most phenomenal works.

Almost any music from Aerosmith and Steven Tyler is feel-good. Also, they always manage to sound way better live than on record. How is that even possible? Ah, yes. It’s the allure and power of Tyler. The guy knows how to rock the house. Did you know though that Joe Perry came up with the riff during sound check? He was fooling around with it and when Tyler heard it, the frontman started playing the drums. According to Perry, “The words have to tell a story, but for Steven they also have to have a bouncy feel for flow. Then he searches for words that have a double entendre, which comes out of the blues tradition.” Seriously now, who needs chocolate when you have this? We’d even trade tacos and guacamole if we can put this on loop forever. Okay, maybe we won’t go that far but you get what we mean.

Warning: This will make you miss the ‘80s and you might get hit with a bout of nostalgia. Can anyone take us back to that era please? Time travel option is always welcome. You see, we like the 1982 version but the 1987 rendition (yes, ladies and gentlemen, it’s been THAT long) is almost otherworldly and it makes you want to dance and groove to it! Here’s a fast fact: one subtle difference between the original and re-recorded version is the change of lyrics from ‘hobo’ to ‘drifter.’ So basically, that’s the dead giveaway in case you’re wondering which version is currently playing. We’re listening to it in 2017 and well, there’s no better way to start the year than to blast your speakers with all these amazing songs. No negativity, just pure good vibes. This is so old school and we love it. Chocolate, what? We’re fine with this.

This is one of the reasons why rock music will never die. You can listen to it decades after it was first released and it still trumps today’s music. For the record, we’d like to emphasize that no one can hold a candle to this guy. Yes, no one. Jimi Hendrix is a league of his own. But why did we include this classic masterpiece in the list? It’s simple. By any chance, have you ever found yourself not smiling when this song plays? Yup, never. Sure, we get a tinge of sadness because we terribly miss him and his musical brilliance but the song itself makes you feel like everything’s all right. It’s uplifting and it’s epic. Oh and we love this live version – here is a genius at work. That’s how they did it back in the day – nothing but pure talent. And Hendrix has a bucket load of it.

We may be a bit biased because this classic hit from Boston is one of our favorite feel-good songs of all time. There’s just so much talent in one band. Besides, anyone who doesn’t like this clearly needs to have their hearing checked. We can only assume whenever the group performed this live, everyone’s face melted off. Don’t you wish people still played music like this today? That groove is everything. It may be safe to say this is the anthem of our youth. Do you still recall what you looked like back then? Did you copy their hairstyle too? Man, that was the time of our lives. It’s a real masterpiece and that voice is way too beautiful. It took Tom Scholz, the one responsible for writing this classic, five years to finish this track. Guitar World was right when they said that “few can resist indulging in fits of fleet-fingered air guitar and a spirited falsetto sing-along.”

Is there such thing as a perfect song? Because if there is, this is probably it. Stay away from people who don’t like this song – that’s not the kind of negativity you want in your life. If you start playing this and your friend tells you to change it, you might need new friends. Lol. It’s the kind of feel-good song you play when you’re coming home from a long day at work or when you just broke up with the girlfriend who gave you such a difficult time or when you told your horrible boss you quit. Ha! Well, we absolutely love everything about this. The tune, beat and rhythm – we mean everything. And yes, it still feels like it was yesterday when we first heard it on the radio. Years later, it still rocks. Also, we’re glad there are movies and shows that play this track. It keeps it alive.

We could have easily thrown in “Don’t Stop Me Now” or “We Will Rock You” or “Another One Bites The Dust” here but “Under Pressure” gives off some really cool vibes and makes you feel good on the inside almost like you just single-handedly finished an entire layer of triple chocolate cake or a tub of Ben & Jerry’s Chocolate Chip Cookie Dough. Besides, you have Freddie Mercury and David Bowie – it’s the collaboration we all needed at the time. It’s a bit bittersweet, we know, but we also believe somewhere in heaven right now, they’re jamming to this song. Brian May shared in an interview, “It was hard, because you had four very precocious boys and David, who was precocious enough for all of us. David took over the song lyrically. Looking back, it’s a great song but it should have been mixed differently. Freddie and David had a fierce battle over that. It’s a significant song because of David and its lyrical content.”

8. Creedence Clearwater Revival – “Have You Ever Seen The Rain?”

Ah, yes – the legend that is Creedence Clearwater Revival. This is one solid proof that music, rock specifically, knows how to play with our emotions. It’s the track that makes you smile even when you’re stuck in traffic and it’s pouring outside. You can’t be miserable while listening to it, there’s just no way. It’s one of our favorite songs growing up and years later, it’s still on our playlist. It’s has that magical feel to it that somehow makes your crappy days better. We especially like how it’s seemingly in the background of so many films and TV shows. When you hear it playing, it makes you smile doesn’t it? It’s not even remotely surprising that it’s still as good today as when it was released. It’s a classic through and through. It’s a simple song yet one that easily hits you right in the feels. Now, rainy days aren’t so bad anymore.

If you need a little nudge today, you have to listen to this. In fact, it’s best played in the morning because if you’re feeling too lazy to leave your bed, Bon Jovi will tell you: “Come on and get up off your knees…” That ought to do the trick. He has plenty of other feel-good songs too but we like this one more. In a way, it brings some sort of peace to your soul. It makes us wonder, however, how this guy managed to look so much better today than during his younger days. Perhaps it’s his music that’s keeping him young? You know, like maybe it’s his fountain of youth? Ah, there’s a rush of memories coming back. You have to love the message too – it’s inspiring and uplifting. And the beat reminds you of the glam rock era – we’re gonna say ‘take us back’ but you probably already know that.