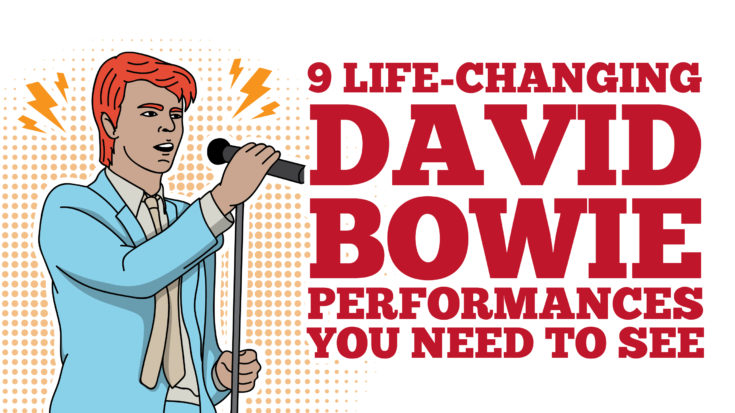 ‘Magical’ doesn’t even cover it. David Bowie was out of this world. His performances were on a different level – musically and creatively.

Let’s go back to some of his most memorable performances.

This is the proof that David Bowie will never be truly gone especially because none of us can stop listening to his albums and watching his performances. There was something almost ethereal about the man. The depth of soul he put into this song is somehow heartbreaking and bittersweet – it gives you joy because of his true artistry and it saddens you because you end up missing him. His stage presence was on a different level. Before this encore, he told the crowd: “This has been one of the greatest tours of our life. Of all the shows on this tour, this particular show will remain with us the longest. Not only is it the last show of the tour, it’s the last show we’ll ever do.” We’ve loved him for how many decades and perhaps we’ll never really move on especially not when we’re constantly reminded of his greatness. He’s truly one-in-a-million.

You’re never going to see something like this on TV ever again! Even with a hoarse voice, he still remains unmatched in the singing department. This was done a year after Bowie was done with the Ziggy Stardust mania. He was never one to shy away from changes and he did so with a bang – a different image and sound, far from what people have gotten used to. He was mainly inspired by the American soul music and he just oozes with talent. He’s like the very definition of cool and take a look at the guy providing the background vocals – he’s no less than THE Luther Vandross. There has never been anyone like Bowie before and perhaps, there never will be. He just owned it. This performance is brilliant and mind-blowing in unspeakable ways. We still get goosebumps while watching this. Not everyone can pull this off – it’s insanely good.

Can we just say how good-looking David Bowie is? If anything, it’s like the proof that he’s a god among mortals. There’s only one word to describe this performance: stellar. Somehow, we’ve always had this impression that he doesn’t do anything half-baked, it seemed like he’s not the kind who settles. It always has to be absolutely perfect. In this video, he looks so funky and cool – as if he’s just a regular guy who’s playing another gig. It’s the kind of song you play during long drives – both mesmerizing and glorious. Yes, it’s one of his most underrated tracks but it’s highly addicting. We’re so glad someone captured this – this guy has more musicality in his fingertips than we have in our entire body. According to James E. Perone, “”Beauty and the Beast” is one of those David Bowie songs with lyrics that can leave the listener scratching his or her head and wondering just what they mean. Bowie establishes a basic of feeling of evil in the air through his impressionistic and non-linear lyrics.”

David Bowie co-wrote this song with Iggy Pop back in Berlin during the ‘70s. According to Starman author Paul Trynka, this track was inspired by Pop’s infatuation with a lovely Vietnamese woman named Kuelan Nguyen. Bowie’s Glastonbury performance in 2002 was nothing short of epic. And well, don’t even get us started on how fabulous his hair was – who can forget those glorious golden locks? The vocal ability and singing prowess, the charisma – he is truly one of a kind. But of course, we opted for this other live version (hence the short hair) because it’s phenomenal. This is why the man’s a legend. This is probably the definitive version of this track – the bass is exceptional and even more so, Bowie’s pitch. After watching this for the first time, we only had one thought: “He had one heck of a voice.” Also, don’t you just love how he interacts with the crowd? What a lucky bunch!

Leave it to David Bowie to stage an incredible comeback. If we can summarize the entire performance in one word, it would be INTENSE. It’s full of life and energy. Wow. That amazing sound just stays in your head. That’s really quite a talent he has. And man, it’s like he’s working his ‘ole Bowie magic on the audience. This is arguably the best version of this track – it’s just special in so many ways. When he talked about the song and the feelings behind it, he said: “It’s not as truly hostile about Americans as say “Born in the U.S.A.”: it’s merely sardonic. I was traveling in Java when [its] first McDonald’s went up: it was like, “for fuck’s sake.” The invasion by any homogenized culture is so depressing, the erection of another Disney World in, say, Umbria, Italy, more so. It strangles the indigenous culture and narrows expression of life.”

Let us just put it out there and say what everyone else is thinking – he looks so dang fine even in a simple hoodie. After several attempts to sound modern and cutting edge, this was a rather refreshing and remarkable return. It was like a simple statement that said, ‘David Bowie is back.’ We have to warn you though, it’s so hard to listen to this today without breaking down. Yes, the ninjas are at it again – cutting onions and leaving them everywhere. It’s mesmerizing to say the least and Bowie simply stands out – not that it’s even difficult for him to do so. He’s always been a star and he shines effortlessly. Everything about it is perfect – the melody, lyrics, and Bowie’s stellar vocals. The song’s title, by the way, is inspired by one of his favorite books when he was 14 years old – ‘Thursday’s Child’ which is an autobiography of actress Eartha Kitt.

Is there anything more powerful and poignant than this performance? It’s the work of sheer genius. David Bowie’s voice will give you the chills. He makes songs that are pure magic and it’s all hauntingly beautiful. It’s definitely not the kind you forget in months. Decades later, it’s still well-loved by fans and other artists. Once in 1990 before performing the song, he said: “You fall in love, you write a love song. This is a love song.” Ah, yes. Reading that alone gives us goosebumps. When he was asked to describe how he wrote it, he shared: “Workspace was a big empty room with a chaise longue; a bargain-price art nouveau screen (“William Morris,” so I told anyone who asked); a huge overflowing freestanding ashtray and a grand piano. Little else. I started working it out on the piano and had the whole lyric and melody finished by late afternoon.” This is a clear masterpiece.

This is quite something because during the performance, David Bowie was experiencing chest pain. It was already severe even before he took the stage but he managed to finish it and you can clearly tell he gave it his all. After the show, he was rushed to the hospital and had to undergo an emergency surgery because of a blocked artery. He certainly didn’t hold back. He’s simply on a different level. How many artists are willing to endure the pain to finish the gig and still deliver 100%? He had so much charisma and that’s another reason why this live version is exemplary. It’s perhaps one of the greatest songs ever written and it remains to be unmatched. And he puts a lot of emotion into the track. You can see his color is not good but still he went on to rock the crowd. That certainly made us miss him more.

Of all the legendary songs he has done, this one will get to you every single time. It makes you feel like everything suddenly stopped and it’s just you and the music. He was always in his element and he basically wrote the soundtrack of our lives. It’s one of his finest shows and his voice was definitely in best form here. And the line that hits us right in the feels is “And the stars look very different today…” The world will never be the same without David Bowie but still, we have his music and that’s probably his greatest gift to humanity. It’s an out-of-this-world performance but what else would you expect from Bowie? Creativity and talent oozed out from his fingertips. He’s unique and never afraid to try something new. He had a great way of telling stories through his songs. And ‘Space Oddity’ is a testament to that. It’s divine.