6 Times Steven Tyler Was A Gift To Humanity 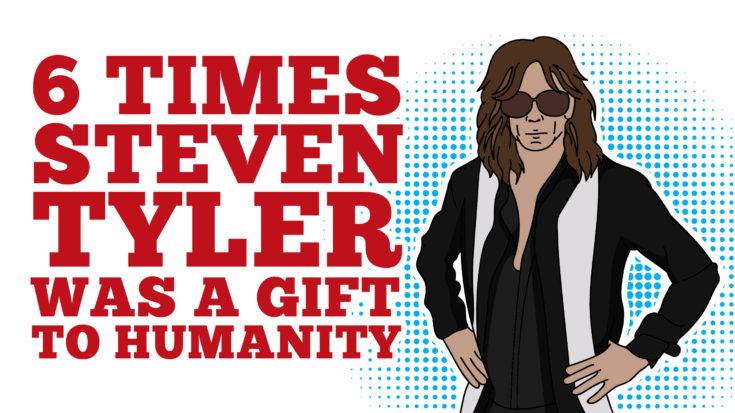 Aside from being one of the greatest frontmen in the history of rock, Steven Tyler is also an all-around cool guy. Need proof? Here’s the list:

6. When He Stripped On American Idol

He’s had so many crazy antics and funny moments during his stint as a judge on American Idol. He even ‘returned’ to the show dressed as a woman. So basically, if there’s one word to describe Steven Tyler, it would be UNPREDICTABLE. You just don’t know what would happen next. Take one episode of AI, for example. He suddenly felt like taking a dip in the pool around the stage. So what else is there to do? After he declared “I’m gonna take my clothes off and go swimming,” he started to strip off his clothes and even handed his top to JLo who was obviously surprised and he also threw his pants to Randy Jackson who refused to even hold it. LOL. He even pulled down his underwear for the camera and the view was just obscured by the AI logo. It will really make you say, “I’ve had enough internet for today.”

5. When He Played On A Homemade Xylophone In Helsinki

Steven Tyler is all about having fun. Come on, the guy seriously knows how to have a good time. He makes us want to hang out with him on weekends! So when he was in Helsinki for the Aerosmith tour in 2014, he hit the streets not just to wander off – but he took over the musical instruments used by busking musicians. This video is just one among many instances when Steven joined the roadside performances. He is literally hitting the bottle. Sorry, we couldn’t resist writing that. Anyway, he’s tapping the notes to their iconic song, “Dream On” and his giggle is everything. Sure, there weren’t plenty of onlookers or people who stopped by for the impromptu jamming session but Steven clearly couldn’t care less. He was enjoying playing the homemade xylophone which consisted of water-filled wine bottles. So if ever he gets tired performing in stadiums, he can always try a different path, right?

4. When He Surprise The Crowd At A Cafe

Impromptu appearances and jamming sessions seem to be Steven Tyler’s thing. The world is his stage and he treats it as such. Whether it’s a small café or a busy street, he will definitely perform if he feels like it. Prior to this, though, there were already rumors that the legendary Aerosmith frontman was in Nashville. He was actually there so he can start writing new material for his country album. This was way back in 2013. He was at the small Bluebird Café to attend and watch a songwriter’s round. The 90-seat venue is famous because it’s where many country singers got their start and even popular musicians stop by once in a while to play. One of the songwriters present, Marti Frederiksen, invited Steven to perform ‘Jaded’ (which Frederiksen co-wrote) and their classic hit ‘Dream On.’ After all these years, he still has that incredible power and tone.

3. When He Sang With A Street Musician

This is why we love Steven Tyler and have so much respect for him. You see, right now there are probably hundreds of buskers all over the world singing classic rock hits. But really, how often do you come across a performance where the original artist joins the musician? That is as rare as winning the lottery. But apparently, one guy who was playing “I Don’t Wanna Miss A Thing” happened to be performing at the same time Steven Tyler was hitting the streets. What are the odds? Talk about a dream come true! Steven even messed up some of the lyrics but who cares? He’s Steven Tyler – he can do anything he wants. The crowd cheered on as they had an impromptu duet and we’re not sure whether the confusion on the guy’s face was because he’s starstruck or he can’t believe Steven is actually there. Either way, he’s gonna remember that moment for the rest of his life.

2. When He Sang ‘Happy Birthday’ To A Little Fan

You can really tell Steven Tyler’s a great grandpa. How sweet is this? Not everyone (especially a rockstar) will go out of their way to greet a 7-year old kid. You can count yourself lucky if you’re in the same flight with a cool celebrity but to be sitting behind him like this – wow, that’s basically a once-in-a-lifetime experience. The mom asked him if he could sing ‘Happy Birthday’ to her daughter and of course, he obliged. He even took her phone to record his goofy message and song. He also showed off his sparkly bling! Man, this is way too adorable. He’s a real class act. Most rockstars on his level probably wouldn’t bother doing it but Steven is awesome like that. The little girl just received a lifetime of bragging rights. Someday soon, she’s gonna appreciate this gesture and will be blown away. It’s clear he’s a super nice guy – what a lucky child!

1. When He Invited A Fan On Stage

As if we couldn’t love him more. Of all the cool things he’s ever done, this one tops the list. It will hit you right in the feels. Then-23-year old superfan Anthony Yorfido, who’s diagnosed with Down Syndrome, was on a shopping trip with his mom in Ontario when he had a chance encounter with his idol Steven Tyler. Tickets were already sold out for the show but as luck would have it, they ‘bumped’ into Steven at a medical supply store. Of course Anthony immediately recognized the rock god. Steven gave him a hug and they even posed for photos. But when Steven found out he wasn’t able to get tickets, he graciously offered backstage passes. During the show, Steven invited Anthony to the stage and handed him yellow shakers so they can share the spotlight. Steven’s small gesture is truly beautiful. Such a wonderful act of kindness – it’s a memory of a lifetime.