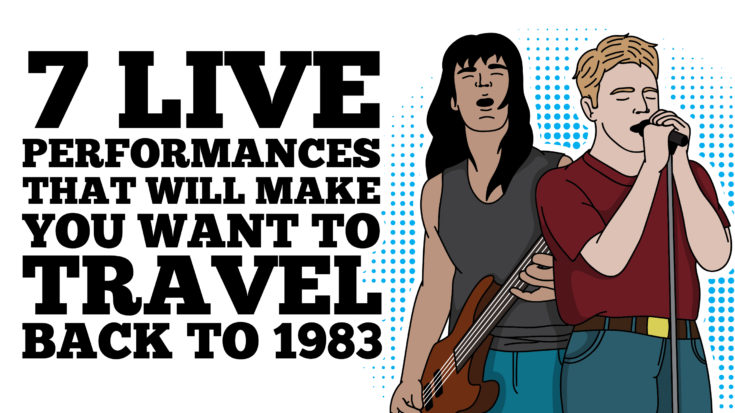 Music At Its Finest

Once upon a time, concert-goers only paid a few bucks to see their favorite musicians live. Yep, 30 years ago, you didn’t have to go broke to have a once-in-a-lifetime experience. Heck, you only had to shell out $18 for the three-day event at Woodstock Festival 1969!

If anyone can give us a time machine now, we’d be forever grateful.

This was taken during one of Stevie Nicks’ shows in her The Wild Heart Tour. She’s blessed with such a beautiful, angelic yet haunting voice and this video is a real gem too. It’s not easy to find footage from her solo North American tour and we are mighty glad we stumbled upon this. She’s a real rock goddess and this is a stunning performance – we can’t help watching it over and over again. She’s slaying it on stage. But then again, what else would you expect from someone who didn’t just write about some of Fleetwood Mac’s greatest songs but is a legendary act all on her own? We’re huge fans of Stevie. *cue in major gushing* And we’re seriously jealous of that crowd. Stevie sings with that kind of voice that really moves you. We can barely imagine what it feels like to actually be there – oh, good times!

1983 was a great year in music – not just in classic rock but in heavy metal too. And Ozzy Osbourne’s live performance of ‘Crazy Train’ is proof of just how awesome it was to attend concerts back then. Anyway, this was post-Randy Rhoads and the debut of Jack E. Lee as Ozzy’s guitarist. He had big shoes to fill but he didn’t disappoint. Then again, we don’t think it’s fair to compare them because Rhoads is a guitar god. Nevertheless, Lee brought something different to the table. Take this for example. He slayed on his axe especially the solo which he played note-for-note – it’s as badass as it can get. Even Ozzy’s voice is so on point! We’re not completely sold on the use of keyboard but hey, we can’t complain. This is way too awesome. Are you missing the ‘80s yet? It’s real music people and we’re getting chills just by listening to this.

This is such a wonderful moment in the history of rock ‘n roll. It doesn’t matter if the entire performance was way too fast, it’s still amazing. And don’t even get us started on how awesome the drum sounds. This is some serious heavy rockin’. The five-neck guitar is something else too – well, it definitely caught our attention. Ha! That’s so insane. We’re not sure if it’s all for show but dang, you can’t help but stare at it. It must be quite a task just carrying that around. As if a two-neck axe isn’t already challenging, they had to go try for five! But whatever, the band had so much energy and enthusiasm that it translated to the crowd. We definitely want more of this – pure and raw rock. It made us nostalgic for all those gigs back in the day – nothing but music and a boat load of fun!

Yes, ladies and gentlemen, we can now all bow down to the legend that is Ronnie James Dio. His voice is mind-blowing. It’s way better than the studio version and a testament to how great of a vocalist he is. He was at his peak form and it’s definitely one of his finest performances ever. People who didn’t get the chance to see him live must be regretting it now. His music is timeless! And the solo is excellent too. It’s like everyone really pitched in to make it one heck of a song. Oh and Dio’s outfit is on point too. It’s yet another thing we love about the ‘80s gigs and concerts. The frontmen really put on a show and there’s not a shred of doubt that Dio is among the best. Okay, we’ll probably end up going over his other performances now. We’re missing him so badly.

Isn’t it sad when you had the opportunity to see Steve Perry live but you missed it? Man, Perry in his glory days is an absolute god. He puts so much soul and emotion into each song that it’s hard not be moved by his performance. This song is a masterpiece, enough said. And it’s not just because of the beautiful melody or Perry’s high-pitched, distinctive vocals. There’s so much depth here that it hits you right in the feels. Don’t you feel blessed we lived at a time when we had this kind of music? There’s rawness that today’s songs can never replicate. Are you having goosebumps or chills down your spine? That’s the Steve Perry effect. Also, don’t be surprised if you find yourself in tears mid-song. When he hits those notes perfectly, it’s like a burst of sunshine. Nobody does it like him – he’s among the greatest.

One great thing about these ‘80s shows is the fact that these acts were at their pinnacle moment, the peak of their career. This performance by Def Leppard is seriously one of their best. They’ve always been great live and we’re mighty glad someone recorded it. Remember when you partied so hard to this album when you were younger? You know, when your weekends were all about cranking up their music so loud your mom came knocking on your door to turn it down? Ah, the good ‘ole days. This band is the real deal, folks. The raspy edge in Joe Elliott’s voice is just perfect. He really belted out those notes and it’s clear his vocals were in top form during this gig. Wow! It will take your breath away. Def Leppard at their prime is unmatched, unrivaled. They were so tough and raw. They totally killed it on stage!

Now this is how you perform live! The energy is just contagious. You can probably relate to us because this is one of the soundtracks of our youth. And mind you, this version sounds so much better than the studio. Just look at the crowd go when they kicked it off. These are the kinds of gig you never forget, not even decades later. It’s like everyone was spellbound with the music. This is the classic case of when good writing meets good playing. There’s just no other way around it – it’s utter perfection. We have to hand it to the guy who recorded it – he basically made it possible for a whole new generation of people to witness what music was like in the ‘80s. Yes, kids. This is what made us so passionate about classic rock – there’s just nothing like it especially today. If anyone has a time machine, please let us go back!