9 Heavy Metal Albums You Have To Introduce To Your Teen 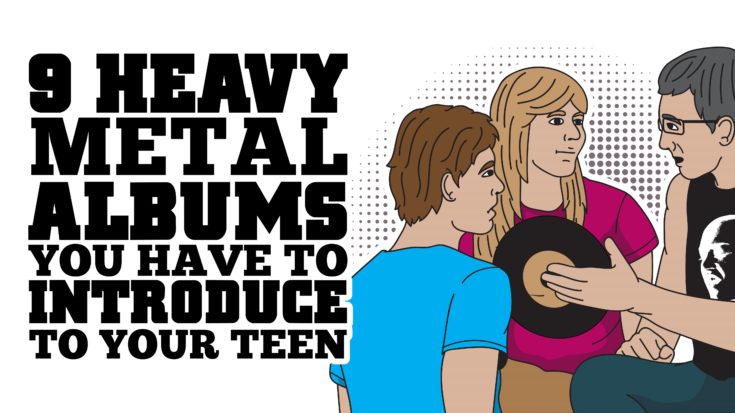 Time To Crank This One Up!

This is how you win ‘Parent of the Year’ award: by showing your teenage kid all the heavy metal music you used to listen to. Maybe you’ll eventually find a moshpit buddy in them soon enough!

When Ozzy Osbourne dropped the ‘Blizzard of Ozz’ as his debut album after being fired from Black Sabbath, listeners were blown away. A classic was immediately born from Ozzy’s incredible career comeback. It packed a lot of punch and every metalhead found themselves bowing down and revering this insanely good music. Not only does it present Ozzy as himself but dang, it showcased Randy Rhoads’ stellar guitar work. According to Ozzy’s memoir ‘I Am Ozzy’ released in 2011, “I’d be talking out my arse if I said I didn’t feel like I was in competition with Black Sabbath when we made Blizzard of Ozz. I wished them well, I suppose, but part of me was sh-tting myself that they were going to be more successful without me.” In a way, this album served as Ozzy’s response to his critics and doubters. He proved that he was more than fine without Black Sabbath.

There are albums that define a band – this is one of them for Megadeth. Ask any metalhead to describe it in one word and most of them would definitely say, ‘Masterpiece.’ ‘Rust in Peace’ is their greatest achievement in terms of creativity. It was groundbreaking to say the least. This is the band’s work that edges out the rest. It’s everything metal music should be – no BS, no gimmicks. With face-melting solos and unforgettable riffs, the songs are relentless and the guitar work is undoubtedly stellar. You can listen to this album for the 100th time and still feel the chills. It’s so rare to find an album where NOT one track isn’t that good – apparently, it’s hard to pick favorites in ‘Rust in Peace.’ There are plenty of good things going on that you’re left with nothing but an ecstatic feeling of listening to the work of a musical genius.

If you want something that will effectively give you a burst of adrenaline, then you might consider plugging in ‘Painkiller.’ There’s pure badassery from beginning to end. And it contains perhaps the most incredible vocal performance in the history of heavy metal. The album received generally positive reviews from critics and fans and it was a bit surprising considering that Judas Priest seemed like they were on the verge of getting dethroned by other bands such as Slayer, Metallica, Megadeth and Anthrax. But no, these guys proved they were losing neither focus nor creative ideas. They came back with a big bang – loud enough to remind the metal community that they weren’t just any other act, they were gods. This time, their music was ferocious, aggressive and heavy. Legendary frontman and vocalist Rob Halford shared to Kerrang! magazine that the title track remains one of his favorite Priest songs. He also said, “I think it’s a wonderful statement. It embodies what metal is – it’s everything a full-on screamy metal track should have.”

More than three decades after it was first released, ‘Ace of Spades’ continues to be a standard in heavy metal and consistently lands a spot in ‘greatest albums’ list. It’s not surprising actually. Very few manage to match Lemmy Kilmister’s musical brilliance and talent. Take the title track, for example. It remains to be a theme song for anarchy in popular culture and is still being used in various TV shows. And that legendary bass riff is almost out of this world. It’s like a punch in the face – the speed and aggression will keep you on the edge of your seat. Lemmy once said that they were about to “be the dirtiest rock’n’roll band in the world – if we moved in next door, your lawn would die.” Well, he surely didn’t disappoint, not one bit! ‘Ace of Spades’ has also been widely considered as influential in both heavy metal and hard rock classic.

Most of the time, great heavy metal albums have three things: they’re badass, tough and heavy. Pantera’s ‘Vulgar Display of Power’ has all of them ticked out. Killer riffs, powerful rhythm section and amazing groove – it’s all thing metalheads want to hear. And of course, let’s not discount the fact that Phil Anselmo’s raw vocal performance (deeper growls) proves that this is quite possibly one of his finest works. Dimebag Darrell’s guitar style and technique definitely set the tone for the album – the towering and catchy riffs in addition to the superlative solos are quite legendary. According to AllMusic’s Steve Huey, this is “One of the most influential heavy metal albums of the 1990s.” It’s a definitive ‘Pantera sound’ which many bands tried to imitate but failed to replicate.
P.S. Legend has it that the man on the album artwork was punched 30 times and paid $10 for every hit. Ouch!

We don’t even know where to begin here. This Slayer masterpiece was definitely ahead of its time and it practically redefined thrash metal. And yes, it changed the face of music forever. ‘Reign in Blood’ propelled the band to a whole new level. Where other groups were releasing 50-minute albums, Slayer went for just 28 minutes. It was utter chaos and they effectively raised the bar for this music genre’s extremity. When guitarist Kerry King talked to author Jon Wiederhorn, he said: “We wanted to blow the lid off of everything we and everyone else had already released. It was like we were saying, ‘Oh, you think that’s heavy? Well, check this out.’ A lot of times when I’m working on something the only think I’m thinking about is how crazy the crowd is gonna get when they hear it live. People start chanting and then the pit starts up. If I was in the crowd, I know that’s what I’d be doing, so I just picture 500 people doing that.”

An absolute masterpiece of this genre, Iron Maiden has just solidified their place in the upper echelon of heavy metal’s pantheon. Besides, not many albums can boast of being a true classic but this one definitely can. There are no fillers, just great songs. It’s like Bruce Dickinson and the rest of Iron Maiden have somehow found a way to perfect the metal sound. It was out of sheer frustration in the recording studio that eventually unleashed the beastly vocals and bloodcurdling savage screams from Dickinson. For social conservatives, they protested this album. They accused Iron Maiden for being a bunch of Satanists and even went so far as to organize public burning of their catalogue or smash the vinyl records using hammers. But AllMusic described it as “a cornerstone of the genre” and “among the top five most essential heavy metal albums ever recorded.” It’s indeed one epic display of the band’s musicality.

Containing most of Black Sabbath’s signature songs, we can never pass up this chance to include ‘Paranoid’ in this list. The band revolutionized metal with this album and we are more than grateful. The track ‘War Pigs’ alone has an entire fanbase all to itself. Seriously, how many heavy metal acts have that kind of achievement? Every single song is mind-blowing. From the guitar riffs and solos to the insanely good vocals – this has everything that metalheads desire in music. More people started paying close attention to this genre because of the various classics you can find in this gem like the title track and ‘Iron Man.’ And even some of the underrated songs are way too awesome. It’s on a different level and it made Black Sabbath a formidable force in heavy metal or music in general. This is a real killer – the legacy it left cannot be overstated enough.

You have the right to disagree with our choice for the top spot – we understand because we’re metalheads too and we’re more than willing to start arguments over who’s better. Anyway, for most people, ‘Master of Puppets’ is the album that made them realize Metallica is not just another one-hit wonder. They’re here to make a statement and dang, they’re doing it right. If you’re looking for an adequate dose of shredding, then this is the perfect fit for you. The title track alone is like the very definition of metal. Killer opening riff, mind-blowing harmonic section and hard-hitting guitar solo – this is quite possibly Metallica’s tour de force. It’s the highlight in the band’s career and no one can deny this album’s importance in the genre. It’s leagues above everyone else and is simply phenomenal. This is like a fistful of metal delivered directly in your face. It’s utter perfection.