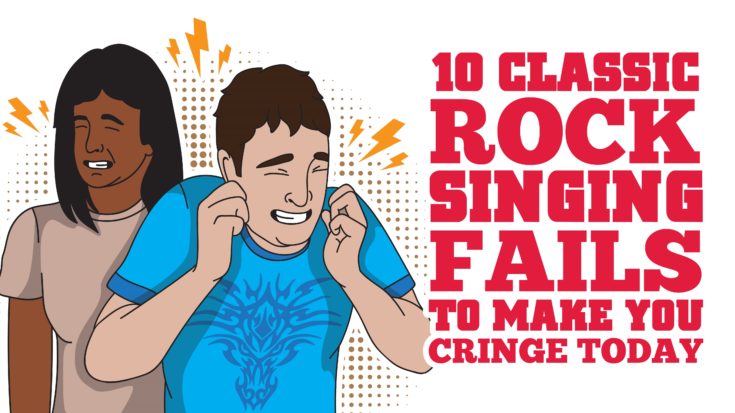 Please Not My Favorite Song

Butchering these classics should be a crime. Ladies and gentlemen, the antithesis of ‘amazing.’

You should see the look of horror on our faces. There’s a reason why most bands started in the garage, not their Mom’s living room. We don’t know which is worse: that these boys should’ve fired the drummer on the spot OR that we couldn’t even make out the words to the song. We don’t have anything against the guy behind the kit, personally. But musically, he might as well have been banging on a coffee can. We seriously can’t tell the difference. We’ll be honest though, this is one tough song to cover even by professional musicians. We can picture out Brian Johnson and Angus Young with their faces filled with disapproval. While it’s not exactly the worst version of this AC/DC classic hit, it’s still not something we’d make even our worst enemies listen to.

To be fair though, this is still miles better than Justin Bieber. LOL.

We only have one question for this guy: “Why man, why?” How could you take one of our favorite Journey songs and slaughter it like this? If this was supposed to be a comedic skit, we still can’t forgive him. We love Steve Perry way too much but this is just hilarious. There were several instances when people auditioned for The X Factor and they blew us away. This is on another level of ‘missing your mark.’ We were definitely as surprised as the audience and judges. It seems to us that even if he started over 10 times, he still wouldn’t get the tune right. Well at least, he knows what he did was less than impressive. He even said, “I’m actually killing this track. I murdered it.” We couldn’t agree more. This is the kind of performance you save for karaoke sessions with non-judgmental friends or impromptu singing in the bathroom.

When you want to be a rock star, you need more than mind-blowing vocals. You have to have amazing stage presence too and that includes ‘swag.’ You know, when you walk onstage and people will be like “Whoa.” But this girl had none of the above. She was cocky and oozing with self-confidence. There are times when that would work but not this. We were so ready to give her a chance to redeem herself. Maybe, just maybe, she’d do justice to the song and not embarrass the heck out of Jon Bon Jovi. So when she started stomping towards the judges, we knew something was really off. Then she tried to hit the first notes and boom. We were quite concerned that Jon Bon Jovi would see this and fall off his chair. But we didn’t see the last part coming though. Maybe the stage was angry at her too!

There are things we wish we could un-see and un-hear. This is one of them. If we could take back the last five minutes of our lives, we would. And we’d be more at ease never knowing of this cover’s existence. But since we cannot do any of that anymore, we’re sharing this so you’d have the same nightmares as us. Ha! You know, the second most important thing to remember when playing live (aside from showing up sober) is to know you’re in the right gig. That is, you got the memo what song you’re playing. Perhaps his pseudonym says it all because apparently, he’s also called The Mad Drummer and now we know why. He’s obviously having the time of his life and it doesn’t matter whether he’s in the right band or not, as long as he’s drumming. Okay, forget what we said, somehow this guy just became our hero.

This is probably one of the most butchered songs of all time. We won’t give out spoilers but still, this is a much better version than Kanye West’s. You see, when you claim you’re as good as the original, chances are you’re not. He said, “I like competition, and I figured I would, what the heck, take a chance.” And dang, that was quite a risk he took. If we could sum up the whole performance, let’s just say our ears started to bleed when he attempted to reach the notes with his falsetto. It eventually got so bad we found ourselves laughing so hard. Try to hold it in, we double dare you. There’s no way you can stop yourself from even giggling. We guarantee you, if you’re having a bad day, this is the best way to cheer you up. Then again, we can never forgive him for slaughtering this masterpiece.

You remember those times when James Hetfield screams “Yeah”? Well, we’d do the opposite because if we were there during the performance, we’d be yelling “No, no, no!” It’s so painful to watch and almost as irritating as nails on a chalkboard. It gave us a heart attack. But that’s not the worst part of it. What we found highly disturbing is the crowd – they were totally digging it, headbanging and cheering as if they’re hearing Metallica themselves. There are bad covers, then there’s this. We were still hoping he’d cut through the middle part, say that they’re only joking then totally slay it. But no, there’s no saving them from this kind of travesty. And that guitar solo? Oh, dear god. We have no words. You know that feeling when someone’s about to embarrass themselves and you can do nothing more than just watch? Well, you’re in for some cringe-worthy experience.

If we were asked to describe this in one word, it would be ‘tragic.’ When Pink Floyd released this brilliant work of art, they probably never even considered someone butchering it. It’s a lot like taking a thousand-year old ceramic plate and breaking it into tiny pieces. Yes, this ‘band’ just destroyed a classic. What were they thinking? It’s as if a bunch of drunken adults decided to come together and try their hand at breaking the Guinness World Record for Worst Classic Rock Singing ever! You see, you know you’re doing it wrong when 12-year old kids make a better job at covering musical masterpieces than you. It’s one of those times when we sorely wished we could be ‘comfortably numb’ from all the pain this is causing us. This is taking ‘experimental music’ to a whole new level. It’s so bad even Roger Waters and David Gilmour would be like, “WTF?!”

Whatever the vocalist is taking, you stay away as far from it as possible. It makes you wonder who in their right mind talked him into doing this. There’s not even a rational explanation for this. Our ear drums just exploded and demanded for his apology. Most of the time, we hear covers which are decent with only the drummer or guitarist who suck at their instruments. That’s not the case here. We’ve tried this at karaoke and the high notes scratch at your throat. Basically, not everyone is equipped to give justice to this song including the guy here trying to show off his vocal chops (or lack thereof). At one point, we thought Dave Grohl would come rushing in with a beer in one hand and he’d punch the singer with the other. Lol, just kidding. While this cover version made us really sad, it still borders on hilarious.

You know that saying, ‘Patience is a virtue?’ Well that’s true if something’s worth the wait. But this is not. It’s going to take at least two minutes before you get to the good part of the video – not the least bit mind-blowing, just the start of the performance. If we didn’t read the name of the song they were playing (or attempting to), we’d probably have zero idea what the heck is happening here. It reminds you of those times when parents warn their kids that rock ‘n roll is evil – yes, if they sounded like this. We even had to congratulate ourselves for finishing until the end. It was so painful, mind you, almost like we had to endure a million pinpricks. Still, they’re lucky to have a wonderful crowd who still kept on cheering and clapping despite all the horrific musical disaster. Don’t you wish every audience responded like that?

There are some things that should never go together – pizza and Jell-O, milk and orange juice, peanuts and gum. Another one is this: a Beatles classic sang with an operatic voice. We’re pretty sure they had various rehearsals prior to this performance so why is it nobody ever told them it’s not going to work? The look of the guys behind the lead vocalist says it all – they can’t wait for to finish the song, rush home and hide underneath a mountain of blankets hoping nobody thought of recording the most embarrassing time of their lives. You know sir, you should really just ‘let it be.’ Although to be fair, he’s not that bad. His vocal styling just doesn’t fit the song. The tone is way too dark and heavy for this track. It’s weird how his voice is simply not suitable for this type of music. We would have loved to hear his take on the opera part of ‘Bohemian Rhapsody’ though.