12 Rock Songs That Perfectly Sum Up The ’70s 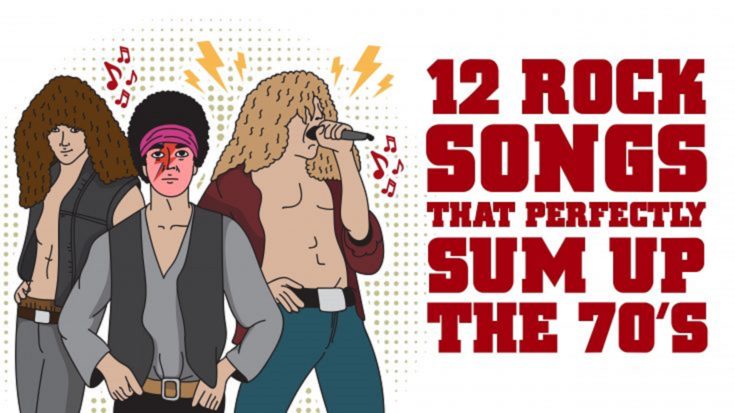 The 1970s was a great era in classic rock. Here are some of the greatest songs in this decade listed in no particular order:

This is just one of the proofs that David Bowie was a musical genius. There’s something magical about this song that also somehow, hits you right in the feels. This moved us to tears because it still feels like yesterday when the world lost a great artist. After its release in 1977, it wasn’t a huge hit both in the US and UK. But eventually, it became one of Bowie’s signature tracks (and perhaps his most admired song at that) and after his death earlier this year, it peaked at no. 12 on the UK Singles Chart. It’s also his second most covered song after the 1974 classic “Rebel Rebel.” It has become an inspirational anthem and we love the hypnotic beat and rhythm – not to mention how uplifting it feels. Robert Fripp said that the ‘effect’ is all “Because David was speaking to what is highest in all of us.”

In all honesty, we can sing this all day and still not get tired of it. We especially love the moment this song starts to kick in – the feeling is simply indescribable and not to mention, it’s extremely well played. It’s no surprise that this is one of Wings’ most famous tracks. When asked about his inspiration in writing this masterpiece, Paul McCartney shared: “It’s a million things … all put together. Band on the run – escaping, freedom, criminals. You name it, it’s there.” And this particular version is perhaps our favorite – it’s undeniably good and McCartney’s vocal performance is stellar. Plus, it’s a thousand miles better than the studio! How often does that happen? This is the former Beatle in his finest form and it’s awesome on so many levels. If we had any reason why we should travel time, then this is it. McCartney’s voice is hands-down flawless live!

The first time we heard this, we weren’t even surprised that it would be the cause of controversy in the UK especially since it was released in 1977 during the Silver Jubilee of Queen Elizabeth II. The opening line alone is enough to draw raised eyebrows from anyone who’s listening, “God save the queen / The fascist regime…” As to the timing of the song, drummer Paul Cook said: “It wasn’t written specifically for the Queen’s Jubilee. We weren’t aware of it at the time. It wasn’t a contrived effort to go out and shock everyone.” Still, when they dropped the track, the message was quite clear: the poor treatment of the English working class by the government. Just recently, a flagship program from BBC News Two responded to a pro-Brexit politician by playing “God Save The Queen” by the Sex Pistols before the end of their nightly broadcast. Now that’s an interesting response!

Some people may say it’s overrated but we beg to disagree. It will never grow old and that’s maybe why we know the beat and lyrics by heart. Besides, this our favorite theme song whenever we’re on our way to awkward family gatherings and dinners. Lol, just kidding! It’s amazing though whenever we crank this up, it’s like drinking a shot of double espresso – you get a burst of energy from that opening riff alone. These guys know how to rock and any aspiring rock star should take down notes how it’s done. And this live version is the real deal – just look at that crowd! If anyone dislikes this song, they seriously need to reassess their life choices. This is the kind of track you blast your speakers on full volume to. And if you’re using headphones, good luck to your eardrums buddy. Then again, you’re about to have one heck of a musical experience!

This is a staple in most classic rock radio stations then and now and it’s perhaps one of Thin Lizzy’s most popular and easily recognizable songs. From the sound to the vocals – everything is just perfect. Can you believe it’s been 40 years since this was released? It seriously seems like yesterday! If you’re already in your middle age, we bet hearing this makes you feel young again. There’s something vibrant and timeless about it. “The Boys Are Back In Town” will remind you of all the things you loved about rock ‘n roll. It’s everything you want and more. It’s a good anthem for reunions too. Picture it out, you and your buddies arriving at a gathering with this tune cranking up in the background. Now isn’t that the most badass moment ever? And the lyrics – man, they somehow fit seamlessly thus telling the perfect story. Just how brilliant is that?

Don’t listen to this tune – it’s a bait! And just like that, you’re going to love this song and you’ll likely play it over and over again. That’s okay, you’re not alone. Whoever introduced you to this song deserves an award. It touched on topics which, at the time of its release, were still nothing more than taboos. Lou Reed said, “I always thought it would be kinda fun to introduce people to characters they maybe hadn’t met before, or hadn’t wanted to meet.” It’s a wonderful classic and we especially love how amazing the guitar sound is. Oh and let’s not forget that it contains one of the grooviest bass lines ever. And Reed is obviously in his finest form here – he is absolutely on fire! Dang, we can’t stop listening. Lou Reed was sure one crazy genius. He will always be remembered as a great innovator and a true rock ‘n roll pioneer.

How can one of the greatest rock songs of all time not make it to this list? Of course we had to include Led Zeppelin’s tour de force. It’s a brilliant masterpiece that every classic rock fan is guilty of putting on repeat. There are so many things going on here but our favorite includes Robert Plant’s vocal performance and Jimmy Page’s guitar solo. But that’s not to say John Paul Jones and John Bonham didn’t shine here. That’s yet another reason why we love this group – everyone is always at their best. It was in 1971 when the world was given the best recording ever made on vinyl and music was never the same. Back in the ‘70s, it became the most requested song on FM radio in the US alone. Remember when Plant was dropping hints back in 1970? He said, “It’s an idea for a really long track…. You know how “Dazed and Confused” and songs like that were broken into sections? Well, we want to try something new with the organ and acoustic guitar building up and building up, and then the electric part starts…. It might be a fifteen-minute track.”

This song is epic. Enough said. It really takes you back to your youth, doesn’t it? It’s another reason why the ‘70s is one of the best eras in classic rock and music in general. Remember the first time you ever heard this? You were probably like, “Oh my god. How amazing does this sound?” No, that’s not an exaggeration because that’s how most of us reacted. It’s like a punch in the face. Pure magic, that’s the only way we can describe this. Even after all these years, no one can hold a candle to this group. They were definitely a force to be reckoned with. Most of the people who were lucky enough to attend their concerts when The Who was at the top of their game would agree that it’s the loudest gig they’ve ever been to. They’re phenomenal and so is this song. Man, rock music doesn’t get any better than this!

Whenever we hear this Deep Purple classic, it makes us want to take out our guitar and start playing. Was this the first song you’ve ever played on your axe too? We have Ritchie Blackmore to thank for this musical masterpiece even if he wasn’t present during this live performance. Okay, we know what you’re thinking – it’s not the same without him. True and we absolutely agree. Nevertheless, they still rocked it! And anyway, we’ve always found the back story very interesting. This will infect you with a rock virus whose only cure is – more music like this! Ah, this brings back so many good memories. You know that feeling when you fall in love with a song the moment you hear the first note? Yes, it’s like meeting your first love over and over again whenever we put this on repeat. This explains why music back in the ‘70s is the best!

That first few notes alone can manage to send chills down our spine. How many rock acts can boast of creating so many wonderful musical masterpieces? Freddie Mercury was a visionary and an innovator. He gave people what they wanted before they even knew what that was. Just take this song for example. Who would have thought the various elements here could work so well together? Nobody even considered how an operatic part could be seamlessly blended into a classic rock song. But when he released it, it was the epitome of perfection. Decades later, it’s still winning people over. If anyone ever argued that there are better eras than the ‘70s when it came to music, challenge them by asking if there’s anything better than ‘Bohemian Rhapsody.’ Freddie Mercury and his set of golden pipes will blow anyone away. This is definitely a pivotal moment in rock ‘n roll.

This is pure gold and a real musical gem at that. Mick Jagger may not be on everyone’s list of greatest rock ‘n roll vocalists but man, what a voice! We still think he’s an underrated singer. Most people would talk about his dance moves or powerful stage presence but he has some serious set of pipes. ‘Brown Sugar’ was recorded and released when The Rolling Stones were at the top of their game and every single member of the band was in their finest form. And take note, when it came out, it was mighty controversial because of the words. In 1995, however, Jagger admitted that maybe he went too far: “God knows what I’m on about on that song. It’s such a mishmash. All the nasty subjects in one go […] I never would write that song now. I would probably censor myself. I’d think, ‘Oh God, I can’t. I’ve got to stop. I can’t just write raw like that.’”

This chart-topper isn’t just The Eagles’ biggest hit but it’s also their most iconic song. It may have been controversial because there are various speculations as to the real meaning of the track. However, Don Henley clarified that, “It’s basically a song about the dark underbelly of the American dream and about excess in America, which is something we knew a lot about.” He also added that it was their “interpretation of the high life in L.A.” We just can’t stress enough how much we love this though. We like to air guitar to this classic every single time. And the solo? Wow, that’s way too good. It really made us want to learn how to play the axe. This is one of the best musical offerings of the decade. If only we can go back to the time when music was like this – no auto-tune, just pure talent. It’s a rare treat!