Top 10 Simple Guitar Solos Anyone Can Play- Perfect For Beginners 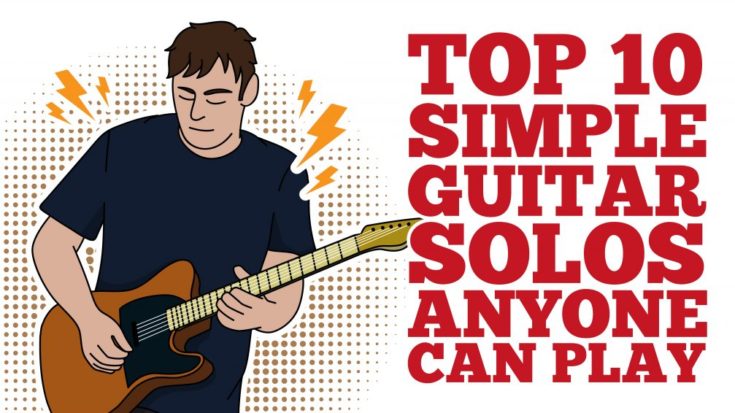 Guitar solos are a staple of any rock record as are lead guitarists highly valuable in any rock band. Guitar solos add color to the song, and without them, a rock song would just feel incomplete. Solos become highlights of a record, a tune that makes it stand out and recognizable. If you’re a rock music fan, there’s gotta be a point in your life when you picked up a guitar and attempted (and maybe even succeeded) to play along the guitar solo part of your favorite song. Some solos are just simply difficult to mimic (SRV, we’re looking at you) but fortunately there are solos out there that are simple enough for the average aspiring lead guitarist to learn at any age!

While we might never be as insanely talented as Jimmy Hendrix or Jimmy Page were, with the following simple guitar solos and tutorials to boot, we can at least try, one lick at a time.

British alternative rock band Coldplay’s heart-wrenching ballad “Fix You” was written following the death of front man Chris Martin’s ex-wife Gwyneth Paltrow’s father. It’s a song about dealing with grief and coming to terms with love and loss. It’s a song that when it gets to the guitar solo part, audiences just raise their hands and tears start flowing. Jonny Buckland, the band’s lead guitarist, is the one making those tears run down the faces of the crowd as he rips out hearts with his guitar skills. While it’s melody is really melancholic, it’s actually pretty simple to learn!

Watch the video below and with practice, maybe you too can make audiences cry (in a good way) with your amazing new musical skills.

Punk rock band Green Day was huge in the 90’s and the early 2000s. They waved the banner for punk teenagers who were more upbeat and energetic their grunge counterparts. The multi-platinum selling album of the band “American Idiot” released in 2004 was a massive hit especially to the young’uns who were coming of age, expressing rebellious teenage angst in cool creative ways such as playing the electric guitar. In the early 2000s, along with gel-spiked hair, thick black guy-liner, low-rise jeans, and tattered black sneakers, learning a wicked punk rock guitar solo was of the highest of trends. Good thing the solo on Green Day’s big anti-war number 1 hit “Holiday” is pretty simple to learn. You won’t look like an American idiot when you’ve mastered this easy and awesome guitar solo.

Nirvana’s “Smells Like Teen Spirit” is one of the most iconic songs of all time. It represented the breaking of underground grunge bands into the mainstream. The anthem of youthful abandon in the 90s really catered to young audiences even up to this day. The track is intoxicating as it is timeless. The entire album just screams “why not?” and that appeals to the wild nature of teens and young adults. The simple guitar solo on “Smells Like Teen Spirit” is Kurt Cobain playing through his vocal melody which was already laid out. The entire solo just gives such a nostalgic vibe to the era of grunge rock, it’s hard to resist not to learn on guitar yourself. It’s simple, it’s iconic, and it’s not stupid but contagious.

Red Hot Chili Peppers’ big hit “Californication” was such an important record that reflected the reality of the obsessive superficial dark side of the Hollywood lifestyle that’s eating up society. It was the biggest-selling album in 1999 and people of the era would have to be very familiar with the hit single which was dropped after a year of the album’s release. Even though there have been roadblocks encountered by the band in completing the track, “Californication” topped the rock charts. It sold over 15 million copied world wide and was certified five-times platinum. “Californication” revived Red Hot Chili Peppers’ career and as famed bassist Flea himself said,

“Californication is the best record the Chili Peppers have ever made.”

Surely, the guitar solo is as recognizable as the song itself and it’s as simple as it can be. Check out the tutorial below and learn the solo yourself!

6. Joker and the Thief by Wolfmother

“Joker & the Thief” is a song by Australian rock band Wolfmother on their self-titled debut album released in 2005. The song is introduced through a very catchy 12-measure opening riff in a Drop D standard tuning. Though the riff is very effective in catching the hook, it’s the solo mid-way the song that makes it so badass. The use of triplets and hammer ons also add to its eclectic effect. Frontman Andrew Stockdale admits that the song was inspired by the Bob Dylan song, “All Along the Watchtower”. The sixth track of the album debut at number 8 on the charts and the video was nominated for the “Best Rock Video” and “Video of the Year” at the MTV Australia Awards in 2007.

Learn how to play the wild and easy guitar solo below.

5. High and Dry by Radiohead

Radiohead may be a little offbeat to the average mainstream listener. It takes a certain kind of appreciation to get into the English alternative experimental rock band’s music. It grows on you with listening to their quite eclectic songs over and over and realize they’re actually pretty cool. One easy delicate acoustic track that gave off a commercial appeal, however, is their song “High and Dry” from their sophomore album The Bends, released in 1995. “High and Dry” is the perfect song to introduce your friends to Radiohead without overwhelming them too much. It’s also fun and easy to play on guitar with it’s simple 3-chord progression. The solo is very basic and fortunately pretty quick to learn, but with the right powerful raw emotion, it can turn into something impactful.

4. Nothing Else Matters by Metallica

Who else gets excited when “Nothing Else Matters” by Metallica builds up to the crashin’ solo just right before the song ends? Yes, it’s one of the few soft rock ballads from Metallica penned by James Hetfield which was also a turning point from their loud and heavy thrash-metal roots. The iconic rock band released the soft ballad in 1992 as the third single from their self-titled album. Interestingly, it’s time signature is that of the 3/4 waltz which is actually more commonly used in Classical pieces such as “The Blue Danube”. The song is simple and chill yet still draws out the raw emotion. It’s also one of the few songs where it’s frontman James Hetfield who does the guitar solo not lead guitarist Kirk Hammet. Hefield himself has said of the song,

“It’s absolutely crazy, that was the song that I thought was least Metallica”

3. We’re Not Gonna Take It by Twisted Sister

In the 80s, Twisted Sister’s “We’re Not Gonna Take It” was one of those ridiculous new wave glam rock tracks that are hard to forget. The hook is in the drum beat with the funky fills and the clunky cowbell. The song served as a sort of anthem of teen in the world who want to stick it up to the man (or their parents). The single itself was a commercial success, reaching number 21 on the Billboard Hot 100, but ironically is also the only Top 40 single of Twisted Sister making them technically a one-hit-wonder.

What’s wonderful about this song though, is not only is it very catchy, the guitar solo on it fairly easy to learn because it’s basically just a play of the melody of the song’s chorus. Check out the tutorial below:

2. Bringin’ On the Heartbreak by Def Leppard

“Bringing On the Heartbreak” is the first power ballad of rock band Def Leppard from their 1981 album “High n’ Dry”. It’s one of the pioneering songs of its own kind as it set the standard for other 80s hard rock bands’ releasing power ballads alike. As the track opens with a classical dual harmony guitar riff, it’s the anticipated guitar solo that really makes the song stand out. It was the late Steve Clarke that originally played the solo on the track but was later on played by Phil Collen on the remix track and in live shows. The song itself was written by the band’s guitarists Steve Clark and Pete Willis along with lead singer Joe Elliot. The powerhouse ballad featured a theme of heart break about a girl refusing to love the man who is crazy about her. Pretty sappy but the song is truly iconic. Mariah Carey even famously covered this classic in 2002. Check out how to play the guitar solo below:

No rock music fan does not know “Highway to Hell” by AC/DC. It’s gotta be one of the most popular iconic rock songs there is and is already very recognizable by the first chord of the intro alone. “Highway to Hell” was the first AC/DC single to make it to the US charts. The album of the same name has sold over seven million copies in America. It was also one of the last tracks in which original lead vocalist Bon Scott sang on before he met his tragic demise due to excessive drinking.

On live shows, it’s one of audience’s most anticipated guitar solo by Angus Young, and people just go wild and crazy as it builds up and comes on. Good news for guitar enthusiasts who want to learn the iconic solo, it’s a simple progression that is very easy to learn. You just gotta put in a lot of practice and energy into it and you’ll be rolling all over the floor like Angus!