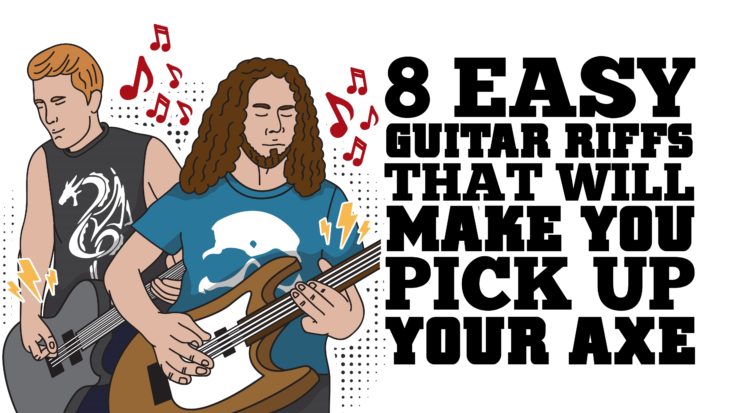 Even if you’re still learning how to play the guitar or have already mastered the axe, these classic rock riffs should be included in your strumming repertoire.

Who would have thought that one of Pink Floyd’s classic hits would have chords which are pretty easy to learn? Channel your inner David Gilmour by playing this beloved masterpiece. Gilmour always blows us away with his guitar work and technique. But don’t let that worry you. ‘Wish You Were Here’ contains a chord that’s just being repeated all throughout the song. You may need a few practice lessons and voila, you’ll be ready to get those solos, bends and rhythm down in no time. To be fair, this particular tutorial is very easy to follow. Take the lessons here, play whenever you can and you can then impress your pals during get-together or weekend bonfire gatherings. It will definitely work like magic. Besides, not everyone can boast of knowing how to play a Pink Floyd track. Even beginners can pick this up pretty quickly! Now you’re ready for an acoustic jam!

2. Creedence Clearwater Revival – “Have You Ever Seen The Rain”

To be fair, this is just one among many songs in Creedence Clearwater Revival’s repertoire that’s fairly easy to play. And the riffs and tune are so catchy and relaxing. It creates visions of staying at home on lazy weekends with a cup of hot chocolate. But even with how calming it sounds, you still feel like tapping your feet or snapping your fingers along to the beat. It’s a beautiful song to say the least and what’s better is that you can learn this on your guitar. With the chords, “C….G….Em….Am….F”, you’re sure to have something up your sleeve whenever there’s an impromptu jamming session. Especially with the upcoming holidays when there’s sure to be gatherings with friends and family, you can put on a mini show and impress them with this track. If you have pals who are classic rock fans too (we assume you have a bunch of them), they’ll appreciate this one more.

One of The Eagles’ signature songs (and included in EVERY live and compilation album they have released), the intro already tells you that you can play this on your own even if you’re still a beginner. After it was released, it became a theme song of the ‘70s. But hey, if you have seven women on your mind, of course you need to ‘take it easy.’ Anyway, you won’t break a sweat trying to learn this. This is easy peasy but like everything else, you need focus and patience. You can start practicing with these chords, “G….D…C…Em…Am” and you now have a go-to song you can play whenever you feel like having some quality time with your guitar. It always pays to know at least one track you have mastered – you’ll never know when the occasion will call for it. And another thing that’s good about this track is it’s so fun to play!

How can we even skip this? That intro is everything! It’s hypnotic, mesmerizing and magical and seems like one of the things that will make you want to practice guitar playing. There may be plenty of versions of this classic folk ballad but The Animals’ rendition is our absolute favorite. It’s hauntingly beautiful and soulful. And here’s a fun fact: the band finished recording the track in just one take. Wow. Aside from receiving the Grammy Hall of Fame Award in 1999, it’s also included in Rolling Stones’ “500 Greatest Songs of All Time” and Rock and Roll Hall of Fame’s “500 Songs That Shaped Rock and Roll.” Learning how to play this is so fun and it brings back awesome memories of that decade. Once you know the chords by heart, we guarantee you’ll never forget them. The repeating pattern is so easy you’ll be flawlessly playing it in your guitar in no time: “Am…C…D…F…E7…”

Most guitarists would tell you that this is the first song they learned to play. And it’s no wonder why – the chords are pretty easy to remember. It contains one of the greatest riffs of all time. You have to understand though that ‘easy’ doesn’t necessarily mean effortless. Once you get the hang of it, it’s all good. But while you’re still in the process of learning, you need to work. At one point, your fingers may hurt but don’t worry, that’s a sign that you’re doing it right. It’s a powerful and intense tune so imagine if you can manage to play this perfectly – that would be an amazing accomplishment. If at some point, you get the chance to show off your axe skills and play ‘Smoke on the Water,’ you might want to thank Ritchie Blackmore for developing the riff. That man knows guitar like the back of his hand!

This is so dang easy to remember, “Am9…F#m…G…A…D…E…” According to The Doors’ guitarist Robby Krieger, who wrote the song, “It’s like I’d saved up all [these ideas] in my mind and got them out all at once.” And boy, did it pay off big time! It stayed at the top spot of the Billboard Hot 100 chart for three weeks and received gold certification from the Recording Industry Association of America. On December 1971, it became their best selling single after the sales went over 927,000 copies. That intro is insane though. What a total killer! Who would have thought it would be easy to learn this? Besides, not everyone can boast of knowing how to play a classic track such as this. Also, even though this is more than seven minutes long, it became one of the most requested songs for radio airplay. So you better know how to rock this!

For the record, this guy can make ANYTHING look easy to learn. He’s a pretty good teacher. He makes everything understandable even for those who just recently picked up their first guitar. And an added bonus is, he puts the fun in learning. We’re still hoping we can someday jam with him. So anyway, the riff in “(I Can’t Get No) Satisfaction” is one of the most popular riffs in the history of rock ‘n roll. Here’s a little back story: Keith Richards was in his room at the Fort Harrison Hotel when he recorded the riff’s rough version. It may be famous but it’s very easy to play even for beginners. The chords are, “E…A…E…A…E…B7…” According to Richards, it’s based on E blues. You can hear the riff at the start of the song and halfway through, the bass joins in. The pattern is repeated three times before the vocals begin.

Guitar playing is a lot like learning to do anything – it’s only hard at the beginning. This is why we compiled this list to help you choose which song to start with. More often than not, all you need is an inspiration like “Hey, that’s my favorite song!” or “I need something I can easily show off when me and my pals get together” or “This looks like something any beginner can do!” The thing is, once you learn how to do it, the notes will practically flow out of your hands. Pearl Jam’s “Black” started as an instrumental demo called ‘E Ballad’ written by Stone Gossard, the band’s guitarist. Mike McCready also shared this about the track’s guitar work: “That’s more of a Stevie [Ray Vaughan] rip-off, with me playing little flowing things. I was way into that trip—I still am, actually, but it was probably more obvious back then. I really thought the song was beautiful. Stone wrote it and he just let me do what I wanted.”