11 Go-To Karaoke Songs You Can Belt Out To 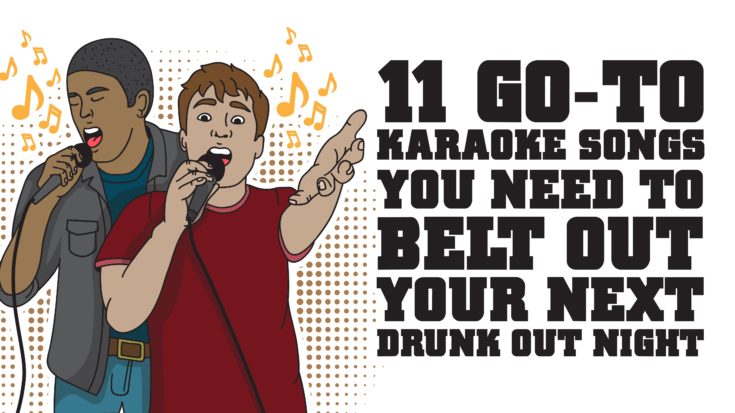 Time To Warm Up Your Golden Pipes

You’ll never know when your friends will invite you over for a karaoke session at the nearest tavern. Better be prepared so we compiled some of the best songs to help you unleash your inner rockstar.

It’s probably one of the easiest songs to sing. Plus, you can steal some of Mick Jagger’s trademark dance moves. His style is something else. You can freestyle to it and impress your friends. At the very least, if you fail, you can always make them laugh. LOL. Everything about this song is catchy and easily recognizable. In all honesty, we know the lyrics by heart. Well it’s not like you don’t crank this up at home and groove to it. You don’t have to deny it because we’re actually guilty of that one too! Ha! We know there are so many cover versions of this track but we always prefer the original. There’s something about Mick Jagger’s rendition that gives you that energetic, adventurous and feel-good vibe. It’s a song made for good times, don’t you think? Remember, The Rolling Stones really know how to party so time to take down notes.

After some serious field testing, arguing and maybe a few drinks later, we came to the conclusion that this is a classic favorite among those who love karaoke. While Joan Jett may not be the one who originally recorded this track, her version is definitely our favorite – not just for playing so loud at home but also when we feel the need to belt out. This is one of those songs that make you thankful for the gift of the karaoke machine. Whoever invented it deserves one big warm hug. We can all agree this should be a staple at every tavern, right? If you don’t sing this, it’s like you’ve committed a crime against rock ‘n roll itself. Joan Jett just has so much swag and she’s practically the epitome of bad ass. We all strive to be like her, to be honest. This track just fits her perfectly!

Well, duh? Need we say more? You’d be lying if you say you’ve never sang this at a karaoke bar at least once! For the record, we’re absolutely in love with Steve Perry’s golden voice – so much so that we play it during workouts, on lazy weekends, and basically every single day of the week especially Mondays. It just motivates you to get up and go to work. LOL. And of course, sometimes listening (even on maximum volume) isn’t enough. There are times when we feel like channeling our inner Steve Perry and attempt to hit those high notes. He always looks so effortless but when we try to sing it, it takes every air and energy in our bodies to at least sound decent. Ha! Still, like us, we bet that won’t stop you from picking this whenever you’re at karaoke. It won’t make Perry proud but at least we tried.

This song gives us life. And we haven’t met anyone who didn’t like it – which basically restored our faith in humanity and their taste in music. We sing along to this masterpiece while carpooling with family or friends, so how could anyone pass up the chance to belt this one out at karaoke? No way, man, no freaking way. It doesn’t matter if your voice sounds a lot like a frog’s croak, you have to sing this. Period. We even feel the need to sing the opera voices and even the guitar parts. It just adds up to the whole Freddie Mercury experience. Oh, yeah and it’s seriously fun too. It’s probably the most enjoyable piece for karaoke – almost as if you’re singing an entire album. Plus, you don’t have to pass the mic too quickly. You have a legitimate reason to be the ‘star’ even if it’s just a few minutes.

If you haven’t done your exercise for the day, then this will give you one heck of a workout. Who says karaoke is just sitting down and singing? The title says it all, though. And besides, it’s a highly energetic track so you can pretty much do anything while ‘performing’ it – you can run around, jump all over the place or do any kind of freestyle dance moves. Uhm, you need to give it your best shot too. Especially if your machine rates you at the end of the song, it’s sort of embarrassing to have a score of less than 90. And sometimes, you just have to go all out. Oh and here’s a fun fact, according to producer Ted Templeman: “Dave wrote the lyrics that afternoon in the backseat of his Mercury convertible. We finished all vocals that afternoon and mixed it that evening.” Now that’s how you create a masterpiece!

This one needs preparation and we’re pretty serious about that. One of our colleagues tried screaming and belting out to this Bon Jovi classic and guess what, he lost his voice the next day. When you listen to it though, it sounds easy – like you can sing while taking sips from your beer mug. But no, it needs full concentration and your golden pipes need to be in their finest form especially when you get to this part: “Whoa, we’re half way there / Whoa, livin’ on a prayer..” You need to get it right and flawlessly at that. There’s no room for errors. Otherwise, legend has it, Jon Bon Jovi will whip you with fabulous ‘80s hair. Not that we’d mind actually but you understand what we mean. In our experience, the moment the intro starts, everyone realizes they want to sing it too. Well, don’t let them steal the mic. LOL.

We were (sort of) arguing whether the top choice for AC/DC is ‘Highway To Hell’ or ‘Back in Black’ but apparently, this one won. Either song would be perfect in making you the star of your next karaoke session. Of course since it’s AC/DC, you need to channel Angus Young’s energy here. The whole track is so electrifying, it compels to get on your feet and start busting out your dance moves. It’s pure, classic rock ‘n roll and everyone will love this – they’d be envious you thought it first. Don’t be surprised if they’d be lining up for a chance to belt out to this too! Nobody should ever skip AC/DC when doing karaoke. It’s perfect in giving you the right mood and feel-good vibe. Pop songs today can’t hold a candle to this brilliant musical masterpiece. Just keep in mind, every time you sing this, Angus Young does a duck walk.

Karaoke sessions are all about fun (with a bit of showing off on the side). So, you don’t have to sing alone all the time. More often than not, it’s a communal activity – meaning, your pals can share the spotlight with you whether you like it or not. Ha. And based on our experience, when the intro comes on, everyone loses their chill. Be prepared to ‘defend’ your mic since your friends will likely attempt to steal it from you so you really need to hold onto it. LOL. But to be fair, you can sing this line with them: “Our little group has always been / And always will until the end..” It’s a fun, highly energetic track – one that makes want to tap your feet and just dance to. If you choose this on your next karaoke, you’ll definitely have an instant dancing party. That sounds so fun!

This is a break away from all the fun, light and dance-able tracks. But this classic is a real staple at karaoke bars especially when you’re getting extra melodramatic (probably thanks to all the drinking lol). The great thing about this though, is we don’t mind singing even the instrumental parts most especially the intro! With blazing speakers and dimly-lit area, it will make you feel like you’re a rock god too, singing one of the greatest songs of all time. And you know what the huge plus is? Everyone (and we seriously mean everyone) knows the lyrics by heart and even the guitar solo so you basically just need the mic and the music. Even without looking at the screen, you can pull this one off. And it’s going to feel as though you’re performing in your very own concert. Yup, that’s basically every classic rock fan’s dream right there. Lol.

You need to make Ronnie Van Zant proud. It’s an incredibly beautiful song and a solid proof that Lynyrd Skynyrd is one of the best classic rock bands of all time. Everything about this track is amazing – the guitar, drum, bass and of course, the insanely good vocals. Here’s a quick tip: ask one of your friends to sing ‘Southern Man’ or ‘Alabama’ by Neil Young before you take the mic, you know, just for fun. If you weren’t yet aware, ‘Sweet Home Alabama’ is the band’s response to Young’s songs. But even Young later commented, “My own song ‘Alabama’ richly deserved the shot Lynyrd Skynyrd gave me with their great record. I don’t like my words when I listen to it. They are accusatory and condescending, not fully thought out, and too easy to misconstrue.” So basically, all’s good between them. So what do you say, ready to belt it out?