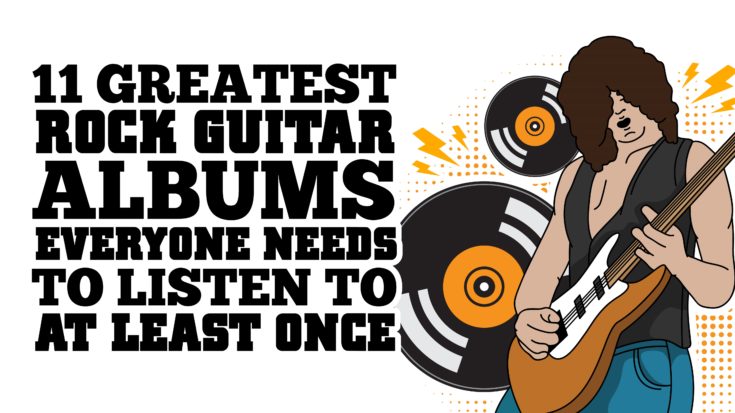 This Made Us Want To Learn Guitar-Playing

Whether you’re an amateur or a real pro at guitar, here are some of the albums you need to have. Also, cheers to some of the most talented axemen the world has ever known.

P.S. This is in no particular order. Have fun listening!

We can sum this up in two words: JIMMY PAGE. For most of us die hard classic rock fans, that’s enough reason to include one of the most legendary bands in this list. Actually, it was sort of difficult to pick just one Led Zeppelin album. The task was so dang hard but somebody had to do it. Let’s be honest, Led Zeppelin II and III are insanely good too but in our opinion, the untitled fourth album takes the cake. It’s the epitome of absolute perfection. It’s basically the Holy Grail of Rock. If you want to know how it’s done, you need to take down notes from the guitar god himself, Jimmy Page. It’s a masterpiece to say the least and if you need any more convincing, there’s ‘Stairway to Heaven’ and ‘Black Dog.’ It’s a powerful album and magical in so many ways. Nothing can ever top this.

No list with the words ‘guitar’ and ‘rock’ will ever be legit without including the great master Jimi Hendrix. It’s not easy making it as one of the greatest debuts in rock history especially considering that 1967 was a great year in music (case in point, epic releases from The Beatles, The Velvet Underground, Jefferson Airplane, The Who, The Doors, Pink Floyd and The Rolling Stones). This was also an important moment for psychedelia – Hendrix’s innovative guitar playing and astounding technique had so much appeal that it even left other legendary axemen staring at him in awe. ‘Are You Experienced’ is his tour de force, no doubt. It’s as artful, stylistic and bold as his fashion sense. He experimented and combined elements to achieve a certain tone and sound. And boy, does he like complicated! He’s a left-handed guitarist who likes to use a right-handed Strat which is why he had to play it upside down!

Just in case anyone has the gall to ask why Van Halen made it to the top 11, make them listen to their signature song ‘Eruption’ and we guarantee, they’d probably piss in their pants after hearing it. Eddie Van Halen’s mastery of the guitar is almost out of this world. Rolling Stone’s Holly George-Warren even called it “an array of unorthodox techniques.” Just take a look at his live performances and you’d be blown away. He’s a legend among guitar gods and it’s no wonder why. And you might not believe the story about why one of his finest works became part of the album. Eddie Van Halen said, “‘Eruption’ wasn’t even supposed to be on the album. I showed up at the recording studio early one day and started to warm up. I had a gig that weekend and I wanted to practice my solo guitar spot. Our producer, Ted Templeman, happened to walk by and he asked, ‘What’s that? Let’s put it on tape!’”

If you want to hear the epic, hard-swinging, mind-blowing interplay between guitarist Dimebag Darrell and drummer Vinnie Paul, you need to have this record. The soulful and heavy shredding will convince you Dimebag’s otherworldly and we’re extremely fortunate to have witnessed his musical brilliance and greatness. Before ‘extreme metal’ was a thing, Dimebag was already rockin’ so hard he made everyone’s jaw drop in wonderment. Atco Records representative Mark Ross saw them perform and said, “By the end of the first song, my jaw was on the floor. The sonic power of it all — the attitude and the musicianship — blew me away. Basically, you had to be an idiot to not think they’re amazing. I mean, how could you see these guys and not think, ‘Holy shit!’?” With larger-than-life riffs, Dimebag was definitely a force to be reckoned with. According to the album producer Terry Date, “I think we won’t see another guitar player with Dime’s kind of creativity and passion for his instrument for a long, long time, if ever.”

Few bands alter the course of rock music with their records. The Beatles is definitely one of them. Their seventh studio album is a masterpiece – The Fab Four were instantly hailed as studio innovators and their progression in both style and experimentation was remarkable. It highly reflected their maturity as recording artists and growth as some of the greatest rock acts of all time. From George Harrison’s backwards guitar solo which Beatles biographer Jonathan Gould described as something that managed to “suspend the laws of time and motion to simulate the half-coherence of the state between wakefulness and sleep” to “the outwardly harnessed, but inwardly raging guitar” in ‘Yellow Submarine’ – there were so many things going on in the album. Ringo Starr even said, “Musically, I felt we were progressing in leaps and bounds. Some of the stuff on this and the Rubber Soul album was brilliant. There was nothing like it.”

There’s only one word to describe this album: EPIC. For both superfans and critics, this tops their best albums of all time. After losing Syd Barrett who descended to insanity, Roger Waters and David Gilmour helped the band find their identity once more. Gilmour emerged as one of the best guitarists in rock with his deeply soulful and expressive pieces, his style and technique were something every axeman wanted to emulate. He truly shined and solidified his place as a guitar god. He also shared, “Dark Side of the Moon and Wish You Were Here were so successful not just because of Roger’s contributions, but also because there was a better balance between the music and the lyrics than there has been in more recent albums.” If you need inspiration in learning how to play the guitar, crank this up. The whole album is peppered with Gilmour’s greatness and amazing musicality.

Containing some of Black Sabbath’s signature tracks, we surely can’t leave Paranoid out of this list especially considering Tony Iommi guitar playing blossomed along with his down-tuned riffs. It’s also considered as one of the most influential albums in the history of heavy metal music. Did you know how the band came up with the title track? Drummer Bill Ward said that at the time, they didn’t have enough songs and Tony Iommi started working on a lick and voila, they built the song around it. Iommi is a real musical genius. Ozzy Osbourne has nothing but high praises for this axeman, “Tony Iommi, in my opinion, is the most underrated guitar player on the face of the earth. And if you take into consideration that he plays with plastic tips on the end of his fret fingers—I mean, how the f*** can you feel where you are?” Preach it, Ozzy.

Who’s Next is like a cornucopia of musical brilliance, beaming with nothing but epic majesty. It was developed from the highly ambitious and elaborate follow up to Tommy, a theatrical titled Lifehouse. The abandoned project proved to be something good because it allowed Pete Townshend and the rest of The Who to create what would be one of their greatest albums. Townshend once said, “I’d been f*****g damaged by the Lifehouseproject. In the end I had an actual nervous breakdown. So by the time we were in the studio making Who’s Next, we had great music and we were playing great because we’d already recorded the album something, like, 15 f*****g times!” He’s also a fan of synthesizers which, according to him “bring into my hands things that aren’t in my hands.” This is rock at its finest and even critics agree this is probably their tour de force – The Who at their absolute best.

This album was made when Guns ‘n Roses were the absolute real deal – at their pinnacle moment, so to speak. Axl Rose was at the peak of his career and his lineup was a true powerhouse of talented musicians – Slash, Izzy Stradlin, Duff McKagen, and Steven Adler. They had the world at their fingertips with their blaring, loud music. Plus, rock wasn’t exactly in its best shape in the ‘80s. When Slash thought back to what happened back then, he said, “In the early Guns days the solos were a little bit more thought out, I have to admit. As time goes by, I realize that when solo sections get a little bit complex, it gets to sound a bit corny.” The music was raw and hard-driving. It didn’t have that pop-ish sound. Instead, it was classic rock ‘n roll all the way. Heavy riffs, addicting guitar solos and of course, Axl’s amazing vocals – it was rock on a grand scale.

Have you ever wondered why ESP Guitars released a limited-edition LTD Master of Puppets Graphic Series to commemorate Metallica’s iconic third studio album? Well, obviously, it’s because ‘Master of Puppets’ is unarguably one of the greatest guitar albums of all time. It’s a masterwork straight from the heavy metal gods. It’s deep, fearless and powerful all at once. It’s the kind of music that will stop you in your tracks and make you say, “What sort of musical sorcery is this?!” The riffs and rhythms are simply unforgettable – it will likely stay in your head for days on end. You can’t escape it, trust us, we tried. There’s a certain heavy pull to it and in fact, all by itself, Metallica would have solidified their rightful and well-deserved spot in metal. Producer Flemming Rasmussen told Rolling Stone, “I’ve always thought Metallica raised the bar every time they went in the studio. They challenged their own technical ability all the time, which is the only way you can get better.”

This may be Nirvana’s second studio album but it’s the first one that featured Dave Grohl in drums. The arrangements were insane and in some ways, unpredictable. One minute, you’re listening to Kurt Cobain’s clean guitar tones then suddenly bam!, you’re hearing heavy, aggressive and distorted music. While recording, Cobain experimented with various guitars – Fender Jaguar and Strats. According to Guitar World, “Kurt Cobain’s guitar sound on Nirvana’s Nevermind set the tone for Nineties rock music.” And boy, we totally agree. There’s something hypnotic about it. It’s not as heavy or even as visceral as others on this list but it’s unarguably a league of its own. Dave Grohl even said, “I was in awe of what was happening with Nevermind. I was in awe of those songs. And intimidated. I didn’t feel like my own songs were anywhere near the ones that we were doing. When you’re in a band with somebody like Kurt, who’s an amazing songwriter, you do anything you can to keep from polluting the songwriting process.”