8 Most Embarrassing Rock Moments We Wish To Forget 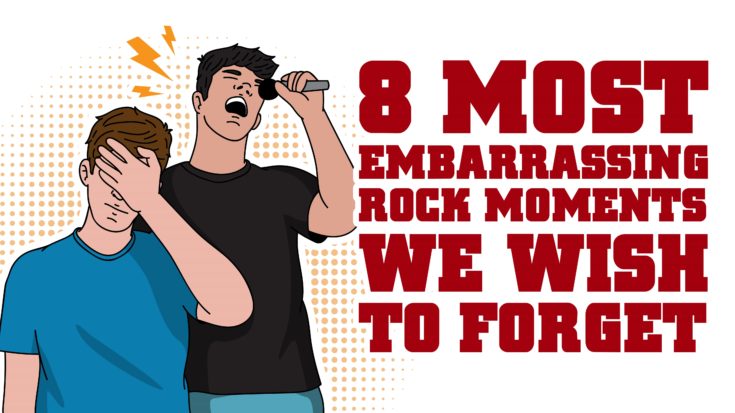 They may be rockstars but deep down, they’re still actually humans – who would have thought huh? And maybe it’s partly our fault for putting them on a pedestal but still, these moments will forever be part of rock history and we still sorely wish they weren’t.

You can’t un-read or un-see anything once you go over this list so if you think you can’t take it, it’s not too late to back out now. But we’re guessing you’ll want to know.

8. Steven Tyler Doesn’t Know How To Walk This Way

Do you feel bad for laughing? Because we do. It’s just that we’ve seen Steven Tyler fall off the stage so many times but dang, it never gets old. He’s one of the greatest frontmen in rock and it’s always delightful to see him perform live because he never he disappoints.

You see, it goes without saying that he’s a total performer but he also happens to be a real klutz.

“I’m a dancing fool out there. I’m my own worst enemy when it comes to risk-taking, but I do what I do, I am (more careful) when it’s raining. I don’t do anything. I’m real careful when it comes to that. But ordinarily, I’ve gotten real strong jumping over all the pedals my guitar players have out there in the middle of the stage and the monitor wedges. It’s like a little hurdle out there for me.” – Steven Tyler

Okay so that explains it, kind of.

7. Rage Against the Machine Bassist Just Hanging Around

Admit it, today’s music feuds don’t come close to that from the ‘90s or 2000. Just take this for example. Rage Against The Machine were pitted against Limp Bizkit for the Best Rock Video award. Limp Bizkit won and so RATM Bassist Tim Commerford decided to show his disagreement by interrupting Fred Durst’s acceptance speech.

You could say he was trying to pull off a Kanye West but he protested in the most passive aggressive means – by climbing up the 15-foot-high arc on the stage.

“We were up against Limp Bizkit, one of the dumbest bands in the history of music. We’re up against them and their singer made the video. So it was Limp Bizkit vs. Rage, Fred Durst-directed video vs. Michael Moore. And I’m sitting there with Michael and I’m like, ‘Hey man, if that camera doesn’t come over here, I’m climbing up that structure and I’m gonna sit there like a f—ing gargoyle and throw a wrench in this show.’ And he’s like, ‘Tim, follow your heart.’” – Tim Commerford

He was removed from the event by the police and had to spend the night in jail.

The first thing we thought was, “God that must have seriously hurt!” This was the time when people were actually looking forward to Award Shows. And of course, at the height of their career, Nirvana was quite unstoppable.

And bassist Krist Novoselic probably got carried away by their powerful performance during the 1992 VMAs that he tossed his bass into the air – and it fell on his face.

“I always try to get good air — I bet I hit over 25 feet, easy! But no matter how high it went, I was not on my game — the only time I’ve ever dropped it was then in front of 300 million people.” – Krist Novoselic

Years later, people still remember that incident which left Novoselic a bloody forehead and a terribly bruised ego. It probably wasn’t their best day because it was in the same event when Axl Rose taunted Kurt Cobain about his wife Courtney Love.

It’s just like their song “Stuck in a Moment You Can’t Get Out Of” except this one happened more than once. And so many fans had to witness it.

In support of U2’s ninth studio album, they embarked on a worldwide tour called PopMart. For the 93 shows they performed, more than 3.9 million fans showed up. And of course, the stage was lavish and elaborate. And that’s where the problem began.

One of their props was a giant lemon mirror ball in reference to their “Lemon” song. The group would walk out of it and onto the stage for the first encore.

“It was a beautiful thing, traveling in that lemon.” – Bono

The thing is, on more than one occasion, the large ball malfunctioned. Basically, they were trapped there while the audience watched in stunned and awkward silence. In some instances, they had to escape through a small hatch at the back.

4. Tommy Lee’s Stuck In The Middle

No matter how much of an amazing performer you are or if you belong to an iconic band, sh*t will happen and sometimes, in the weirdest and most unexpected places. Right, Tommy Lee? We’ve seen so many theatrics and stunts and this one’s pretty impressive because he had to play drums while riding on a flying roller coaster set upside down and in the middle of his solo, the machine malfunctioned and he got stuck. Well, that was awkward.

“It looks like the rollercoaster is broken. Well, fuck the rollercoaster! Come on, guys, help. Come get me. I can’t believe this is happening on the last night. I knew something wasn’t right when I took off.” – Tommy Lee

What a way to make a mark on their final show. It may not have been flawless but hey, let’s look on the brighter side of things – at least people will still be talking about it in a few years.

3. Courtney Love And How NOT To Crash An Interview

Courtney Love has done some pretty outrageous things that she deserves her own list but for now, let’s settle with how she behaved during the 1995 MTV Video Music Awards. I have to tell you though, this is cringe-worthy. It’s one of those times you wished you were there telling here, “Don’t do it!”

In a way, Courtney Love and Madonna set the standard for Awards Show beef. You see, Kurt Loder was interviewing Madonna after the show and Love decided she wanted to be in the spotlight again. However, Love didn’t just crash it, she made quite a show by throwing her compact powder over Madonna’s head.

You’re probably familiar with the phrase “kill them with kindness” because that’s EXACTLY what Madonna did. And she did it in a not-so-subtle bitchy kind of way. Oh well, that sure didn’t end well for Love.

We feel bad for including this on the list because to be fair to Metallica guitarist Kirk Hammett, it was all unintentional. This happened during a show in Sydney, Australia back in 2010. The culprits are the big black beachballs on stage.

Come to think of it, who would have thought those seemingly innocent things could be dangerous? While performing “Seek and Destroy,” Hammett was kicking them around and accidentally, did the same thing to one poor kid.

“The poor wee one happened to be in the wrong place at the wrong time. She wasn’t hurt. She didn’t go ‘flying several feet into the audience.’ And Kirk and she remain good buddies. It’s very cool that everyone showed concern and support though, so we just wanted to say ‘it’s all good’ and thanks for asking.” – Metallica’s official statement

There were rumors that it was James Hetfield’s child but the girl was actually the stage manager’s daughter. Fortunately though, she wasn’t injured. So yes, you can start joking now because she’s okay.

1. Lenny Kravitz Shows Off A Little Too Much

Just when you thought you’d seen it all – Lenny Kravitz makes you realize why it should be a crime for men to wear tight-fitting leather pants especially on stage. Wardrobe malfunction for them rarely happens even during the time of hair bands – when tights were the “thing.”

But for those who saw Kravitz’s performance, they weren’t just treated to a live performance but also an eyeful of his, er, manhood.

According to a fan, “The producer stepped up and said that they had some problems onstage. A bit later Kravitz came out wearing other trousers. He said ‘sorry, I ripped my trousers’.”

If that’s not shocking enough, spectators also saw a ‘piercing’ down there. Even Steven Tyler was surprised and Kravitz posted a screenshot of Tyler’s text message saying, “Dude … No underwear and pierced … Fu*k me … You never showed me that shit.”

The moral lesson here is to wear better and stronger pants next time especially if you’re planning on squatting mid-show.