7 Most Controversial Marriages in Rock 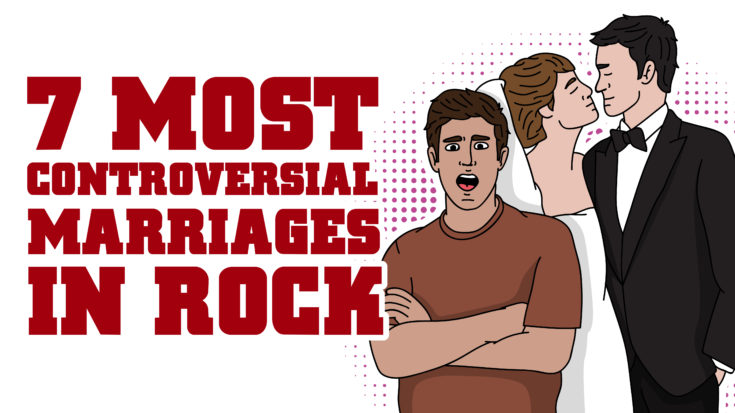 You know country singer Ronnie Milsap’s song “All is Fair in Love and War?” The first few verses are:

And that’s perhaps the most accurate way of describing the messy, ugly and controversial marriages by some of our favorite rock ‘n roll legends. Of course, this is excluding the scandalous affairs in between.

Dennis Wilson’s death isn’t the only thing that’s controversial – so was his relationship and consequent marriage to Shawn Marie Love. The story goes that Wilson had a rivalry with his fellow bandmate and cousin, Mike Love. It’s well-know that Wilson was The Beach Boys’ sex symbol and girls everywhere could never resist him. So when he and Love had a falling out, he put that to good use.

“He started talking to me like a big brother. He said, ‘It’s not safe for you to tell everybody who your dad is.’ All of a sudden he changed the conversation. At first, some people thought he was coming on to me to get at Mike.” – Shawn Love

She was 16 years old back then and the illegitimate daughter of Mike Love. The people around them believed Wilson did this mostly out of spite for the girl’s father. They had their first child a year later and got married in 1983 when she turned 18.

In very rare instances, ex couples end up as friends and live happily ever after apart from each other. Such thing didn’t happen to Beatle legend Sir Paul McCartney. His marriage to Linda was like a fairy tale come true. But the one with Heather Mills was nothing short of a disaster – they were both bitter not just until the end of the relationship but even years later as evidenced by a TV interview with Mills taking jabs at her ex-husband and with McCartney’s son James revealing he never liked Mills. Ouch.

“OK, yeah. I suppose that has to be the prime contender. But I don’t wanna down anyone. These things happen, y’know? But I tend to look at the positive side, which is that I have another beautiful daughter out of it.” – Paul McCartney on referring to his marriage with Mills as his biggest mistake

Well, she did want a settlement of $250 million and had a ridiculous proposal of yearly budgets like $250,000 for clothes alone. We’re just glad this phase is already over.

Ah, yes of course, who would even forget rock’s most famous love triangle? She’s a photographer, model and author but most people remember her as the first wife of legendary musicians George Harrison and Eric Clapton. In a nutshell, he’d been infatuated with her while she was still married to Harrison (whom Boyd met while filming “A Hard Day’s Night”) and when they split up, she ended up in Clapton’s arms and incredibly so, with Harrison’s blessing to boot.

“I was married to Eric’s close friend, George Harrison, but Eric had been making his desire for me clear for months. I felt uncomfortable that he was pushing me in a direction in which I wasn’t certain I wanted to go. But with the realisation that I had inspired such passion and creativity, the song got the better of me. I could resist no longer.” – Patti Boyd

To be fair to them, they all remained civil and even friendly after everything.

It all began like every fan’s dream – a lady pursuing the frontman of a rising rock band. But she wasn’t just another girl vying for Kurt Cobain’s attention. She once appeared in the film Sid & Nancy and is the frontwoman of Hole.

“I was determined to be a bachelor for a few months. But I knew that I liked Courtney so much right away that it was a really hard struggle to stay away from her for so many months.” – Kurt Cobain

It was a rocky marriage and some of Cobain’s close friends and even associates thought she had a very strong personality. But that wasn’t what made it controversial. It’s the fact that after Cobain’s infamous suicide, one conspiracy theory suggested that Love had him killed – this is according to a private investigator she hired after Cobain left rehab. The fact that Love blew through $27 million in “Nirvana money” after Cobain’s death didn’t help.

Does this need any explanation? Even those who aren’t hardcore classic rock fans know all the craziness in The Osbourne household. Just this May, Ozzy and Sharon renewed their vows making them one of the most enduring marriages in rock history. While they may now be “back on track,” it’s not without a few bumps in the road.

“It’s been very hard. But for me, I forgive. It’s going to take a long time to trust, but we’ve been together for 34 of marriage and it’s more than half of my life. I just can’t think of my life without out him. Even though he is a dog. He’s a dirty dog. So there we are. He’s going to pay big.” – Sharon Osbourne

Their marriage was on the rocks last year when Ozzy cheated on Sharon with hairstylist Michelle Pugh. And well, it was a messy affair to say the least with Ozzy temporarily leaving their home. And he even confessed his other sexual liaisons!

Even when you’re famous all over the world, there are still some things best kept private. The wedding of Baywatch bombshell Pamela Anderson and Mötley Crüe drummer Tommy Lee was shocking enough. It was a whirlwind romance since they got married just four days after meeting each other. But things got ugly real quick too. It was in 1997 when an intimate home video of their honeymoon was stolen by a disgruntled employee (he did it for revenge) and became the first celebrity sex tape after it ended up on the internet.

It went viral so fast that it single-handedly gave the company that broadcasted it massive sales. In less than a year, the tape made $77 million. The scandals didn’t stop there because in 2002, Anderson revealed she contracted Hepatitis C from Lee.

Jerry Lee Lewis is widely known as a pioneer of rock and roll and rockabilly music. He had massive hits that helped catapult him into international stardom. But it all came crashing down when at 22, he married 13-year old Myra Gale Brown who was his first cousin once removed. That alone wrecked his career – his fee for live performances used to be as high as $10,000 but after the scandal, it was went down to $250 a night.

“I was always worried whether I was going to heaven or hell. I still am. I worry about it before I go to bed; it’s a very serious situation. I mean you worry, when you breathe your last breath, where are you going to go?” – Jerry Lee Lewis