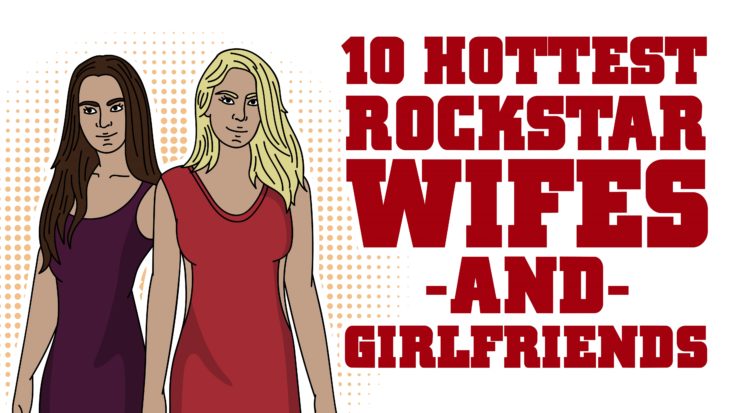 Too Hot To Handle

Let’s face it. More than fame and money, another perk of being a rockstar is getting to meet some of the hottest chicks to ever walk the Earth. You need proof? Check out this list and tell me you don’t envy any of these guys. To be fair though (and I’m speaking with confidence of my masculinity), some of these rockers are pretty gifted in the ‘looks’ department.

The stunning wife of Korn guitarist James ‘Munky’ Shaffer, you’d most likely find your jaw on the floor after watching the clip above. She’s an Albanian-American actress who has appeared in a variety of TV shows and movies like 2002 “Catch Me If You Can” (starring Leonardo DiCaprio and Tom Hanks), 2000 “Almost Famous” (with Billy Crudup, Kate Hudson and Patrick Fugit), crime drama CSI: Crime Scene Investigation and comedy series Curb Your Enthusiasm.

“James proposed at the Eiffel tower, so it just seemed like we were supposed to get married here. It was really my dream wedding. It couldn’t have been any more perfect.” – Evis on their wedding day

It was in 2005 when she started dating James Shaffer and eight months later, they got married. They now have two sons – D’Angelo DraXon born on November 7, 2012 and Rocky Rebel born on August 20, 2015. And yes, they make a gorgeous couple.

Love him or hate him, Lars Ulrich is surely winning at life. With a successful career in music spanning more than three decades, he hit the jackpot in the relationship department when he married his third wife, American fashion model Jessica Miller. To be fair to the guy, he’s always had a string of stunners with him on and off the red carpet.

“I love being in creative situations where I’m out of my league. And you could put a garbage bag on Jessica and she’d look great, so obviously that side of it was a no-brainer.” – Lars Ulrich on photographic wife Jessica Miller for Citizens of Humanity

Miller is more than just “Lars Ulrich’s wife” because she’s a veteran model who has walked the runway for big fashion houses like Chanel and Marc Jacobs. She also modeled for Guess, Tommy Hilfiger, H&M, and Calvin Klein. In 2003, she even won “Model of the Year” during the International Photographer Awards.

Nine Inch Nails founder and principal songwriter Trent Renzor has an eye for beauty, period. Mariqueen Maandig is the Filipino American who stole his heart. And more than her breathtaking, exotic beauty, Maandig previously worked with Los Angeles-based rock band West Indian Girl as the vocalist from 2004 to 2009. From 2010 up to the present, she’s been working alongside husband Renzor to form the group “How to Destroy Angels.”

“I like to stay in a shroud of mystery. I tell people [Trent and I] met at a Mensa meeting, because we met under such unusual circumstances. There have been requests for photo shoots with these recent interviews, and I needed a good reason to decline.” – Mariqueen Maandig

Yes, they’re indeed a power couple. Aside from her musical career, Maandig also modeled for Playboy magazine after departing West Indian Girl. She was featured in their January 2009 “Becoming Attraction” issue.

Aside from being widely considered as one of the greatest vocalists in metal, Serj Tankian also hit the jackpot by marrying his long time girlfriend Angela Madatyan. Have you ever seen someone so beautiful you’re at a loss for words? Yep, that happened to me a few times. Madatyan reminds me so much of Miranda Kerr – angelic almost ethereal beauty. It’s like, what have we done to deserve looking at someone as gorgeous as her?

“To my incredible wife, best friend, and semi-pro photographer @madtank Happy Birthday. This has been our best year yet.” – Serj Tankian’s Instagram greeting for his wife in 2015

She’s a bit of a mystery actually. You often see her by Serj Tankian’s arm during events but I don’t know much else. They got married in a private ceremony in Simi Valley, California. On October 24, 2014, their first child Rumi was born. You can just imagine how perfect the little boy looks.

Jill McCormick is just hands down mesmerizing. She’s an American fashion model and started modeling at 17 after she joined the Elite Models Miami Division. She met Pearl Jam frontman Eddie Vedder and they started a relationship back in 2001. Eight years later in 2009, they got engaged. In 2010, they finally tied the knot. But of course, for the longest time, she’s been considered as the first lady of grunge.

“Look, the person I fell in love with, that happened to be her job. There were a couple days where it was like, ‘Wow, this seems contradictory.’ It had to pass a harder test than falling in love with just anyone. And it did.” – Eddie Vedder on bashing modeling in his “Satan’s Bed” track

She’s had a successful career though after she graced the pages of Elle, Vogue, Cosmopolitan and Harper’s Bazaar. No wonder Vedder can’t take his eyes off her!

If this proves anything, just like Lars Ulrich, you don’t have to be the lead vocalist or frontman to get the girl. Have you seen Duff McKagan’s wife? Because if not yet, you need to start paying attention. “Hot” doesn’t even cover it. Gorgeous, stunning and you can basically throw in all the superlatives you know. And similar to some of the ladies on this list, she’s an American fashion model. Now why am I not even surprised?

Awww, isn’t that the sweetest thing? But get this, Susan Holmes is more than just a pretty face although she has appeared in numerous covers like Playboy, Marie Claire, Vogue and Elle. She’s also a fashion designer and even has her own swimwear line. Yup, Duff sure has some exquisite taste!

Nikki Sixx knows what’s up. He likes to show her off and go on romantic display during their vacations – whether it’s in Malibu or Bora Bora. Let’s all be honest here. If you had Courtney Bingham as your girlfriend or wife, wouldn’t you want to remind the whole world how she seems too pure and way too beautiful for us to behold?

“I’m on my third marriage [to model Courtney Bingham] – my last marriage – and I want to have another child. I have four amazing children and it’s been the greatest thing that’s ever happened in my life. They teach me every day. I try to show them what I’ve learned.” – Nikki Sixx

She’s not just an occasional model but she’s also a producer, entrepreneur, media personality and writer. She’s the creator of the lifestyle brand How2Girl and is widely known as a DIY guru. So there you have it. She’s definitely the total package!

Rob Zombie’s wife will make you want to revisit your deep desire to become a rockstar. Sheri Moon Zombie has everything – God-given looks, ultra sexy body and an overflowing amount of talent. She’s an actress, model and fashion designer and she has appeared in Rob’s films but if you haven’t seen any of his work, be prepared to watch some of the goriest and most violent scenes ever.

“We had our wedding date set for November 9. We’d been together for nine years already, and we had the wedding planner and all that stupid stuff, and we were taking a walk in the neighborhood and were like, ‘Let’s just elope.’ It was the best thing we did. I was so happy.” – Sheri Moon Zombie

Rob Zombie may have become popular as the founding member of the heavy metal group White Zombie but he sure made a mark in the movie industry because of his nightmarish movies. Still, he has a dreamy wife so, what more could anyone ask for?

Yes, people. We have a Victoria’s Secret Angel on this list and that makes Kings of Leon frontman Caleb Followill a real legend. This girl doesn’t even need any introduction. She has probably walked all the runways of major fashion houses and graced the cover of various magazines. She even appeared in two of the music videos from Kings of Leon – “Use Somebody” and “Temple.”

“He was performing and as soon as I saw him, I couldn’t stop thinking about him…. I knew he liked me, so I played it cool. I never exchanged numbers as I just knew we were going to see each other again … We’re so compatible; he’s the coolest guy I’ve ever met, and my best friend.” – Lily Aldridge on husband Caleb Followill

They’re a stunning couple. If you disagree, then I’ll just go ahead and assume you’re just jealous because I am – like for real.

Everyone can go home now because this is the ultimate winner – David Bowie’s wife Iman. I’m actually finding it hard to describe her in a way that gives justice to her beauty. To call her stunning is an understatement. She’s a fashion model, entrepreneur and actress. She’s also well-known for her philanthropic work which is just impressive.

“Their love for each other was immeasurable. Despite all the fame and fortune, David was never happier than when staying in with Iman. They were invisible New Yorkers. He was able to travel around Manhattan with a cloak of invisibility living a normal life he so craved. The thing was, David was anything but normal but that is what he craved most in his life.” – a close friend on David and Iman’s love

Looking at all their past photos, it makes you think someone up there must’ve thought a rock god like David Bowie deserves a goddess like Iman. And so that’s what happened.