The 8 Best Hard Rock Albums Of The 70s 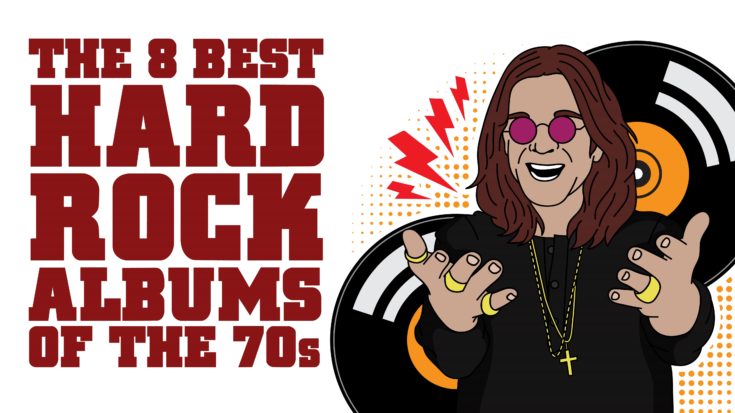 Let’s see if your favorites made the cut:

They changed the face of music one song at a time. Call it masterpiece or epic cacophony of a musical genius. No matter what you decide to refer to it, one thing’s for sure, it transformed hard rock. In an era when punk and disco where dominating the air waves, these became our saviors.

The 1974 “Burn” marked a huge change for the band (and consequently shook their fan base). It was an amazing record but since I can’t have two artists on this list, I’d have to go and pick “Made in Japan.” In a nutshell, it blew everyone away. Although a reader’s poll from the Rolling Stone magazine ranked it at no. 6 on the Best Live Albums of All Time, most would agree that it should have taken the top spot!

“The band was at the height of its powers. That album was the epitome of what we stood for in those days.” – Jon Lord

From the guitar and the bass to the drums and vocals, it’s the epitome of musical perfection. It’s one of the things that make me long to go back to the 70s.

This is proof that something good still comes out of difficult times. Pete Townshend suffered from nervous breakdown after the highly ambitious sci-fi rock opera “Lifehouse” (a follow up of “Tommy”) was abandoned. The silver lining? He was left with songs so epic and extraordinary, it became one of the finest records The Who ever made. A remarkable feature is the use of rock synthesizers.

“I like synthesizers because they bring into my hands things that aren’t in my hands: the sound of the orchestra, French horns, strings… You press a switch and it plays it back at double speed.” – Pete Townshend

It’s everything you want and more in a hard rock album – as loud as it can get but still balanced out by ballads. It’s Pete Townshend at his most inspired. It packs a lot of punch and showcases a wide array of emotion. It’s a real riot and I just love it.

Led Zeppelin is one of the few bands with an almost-perfect catalog even with some head-scratching lyrics. Picking their top five best albums is quite a daunting task. But while “Physical Graffiti” and “Led Zeppelin II” set the bar for hard rock sounds, we can all agree that “Led Zeppelin IV” really takes the cake here. It’s the group at their absolute best – zero weak points. It’s not just because of “Stairway to Heaven” but it basically has all the ingredients of a great rock ‘n roll album – from the folk-rock elements to the impeccable vocal performance.

“We decided that on the fourth album, we would deliberately play down the group name, and there wouldn’t be any information whatsoever on the outer jacket. Names, titles and things like that do not mean a thing.” – Jimmy Page

This secured Led Zeppelin’s place as rock legends. It’s solid through and through and it captured the band at their mightiest.

Who would have thought that KISS’ first concert album would be released at the perfect time? They already had three albums and while they were starting to gain a reputation when it came to concerts (theatrics and all), their record sales weren’t exactly profitable. There were even reports that the band has been living off their then-manager’s credit card. After its release, it became their first gold record and cracked the top 10, peaking at no. 9. But it’s not without controversy since there were doubts whether it was really live and if Gene Simmons and Paul Stanley had some overdubs.

“Yes, we enhanced it – not to hide anything, not to fool anyone. But who wanted to hear a mistake repeated endlessly? Who wanted to hear an out-of-tune guitar? For what? Authenticity?” – Paul Stanley, Face the Music: A Life Exposed

Here’s the deal with KISS, you can truly appreciate them once you see them live. And this album perfectly captured the whole feel. There may be some debates as to the post-production enhancements but at the end of the day, it was a real game-changer.

This is possibly one of their most underrated albums. It showcased Bon Scott’s talent for poetry but that’s not to say it wasn’t heavy. On the contrary, it’s extremely well-rounded – it’s loud and powerful but still has a lot of soul. From the deep lyrics to the blistering guitar parts, it’s AC/DC in their prime. And of course, a significant moment was when Angus Young just lets himself loose while shredding on the solos. It’s face-melting and mind-blowing.

“With Angus and Malcolm, they were put on this earth to form AC/DC. They’re committed big-time. And if they feel your commitment is anything less than theirs, well, that’s a problem. Angus was intense. He was AC/DC 100 percent. His work ethic was unbelievable. When I was with him, he expected everybody to be just like him, which is pretty impossible…At the time, Malcolm said something about them wanting a bass player who could sing, but I think that was a smokescreen. I don’t know if there was any one reason. It’s just the way it went down. I felt the distance growing between me and Angus and Malcolm. When I was fired, it wasn’t so much a surprise as it was a shock. There was a lot of tension in the band at the time. We’d just been kicked off a Black Sabbath tour, and this was right when a trip to the States was cancelled because the record company rejected the Dirty Deeds Done Dirt Cheap album. So it was a hard period.” – Mark Evans

Still, it was an incredible transition, to say the least. And something that every AC/DC fan will never get tired of listening to.

This one is a raw masterpiece, period. If Black Sabbath can be defined by one album alone, this would have to be it. Three of the band’s most popular songs are included here and even those which aren’t as famous are still incredibly good. It makes you think that this is some sort of Greatest Hits collection – yes, it’s brilliant like that. Would you believe that the “Paranoid” song which was a massive hit came together very quickly?

It’s lined with nothing but the best cuts and that made it influential. Maybe the only downside to this is that the next albums didn’t even come close to how flawless “Paranoid” is.

It doesn’t always happen that a band hits it big with their debut album. But Boston managed to do it. It’s mostly thanks to Tom Scholz, an MIT graduate (complete with a Master’s Degree) and a classically trained pianist, who spent years in his basement trying to find the perfect sound. Decades after it was released, the songs remain staples on classic rock radio stations and well, they deserve every spot they got on every ‘best albums’ list.

He described his home studio as a “tiny little space next to the furnace in this hideous pine-paneled basement of my apartment house, and it flooded from time to time with God knows what.”

When it came out, it was a breath of fresh air. At the time, most listeners were saturated with disco and punk. Add in the sci-fi theme of the artwork cover, it was something every rock fan didn’t know they need.

Then came Van Halen and hard rock was never the same. This album is a brilliant work of genius. It basically announced the arrival of the band in the music scene and what’s more, they did it in style. Every song just stood out and that in itself is already quite an achievement. This pretty much changed the world. The tunes and tones – they ushered a new kind of sound and it influenced generations of musicians that followed.

“The still-amazing thing about Van Halen is how it sounds like it has no fathers … Like all great originals Van Halen doesn’t seem to belong to the past and it still sounds like little else, despite generations of copycats.” – AllMusic’s Stephen Thomas Erlewine

It’s explosive. This album alone propelled Eddie Van Halen to guitar god status and made them legends. If they stopped making music after this was released, they’d still be icons.