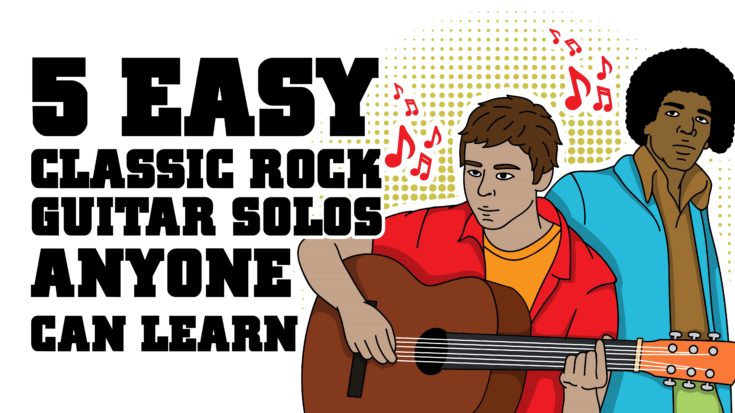 Rome wasn’t built in a day and of course, Jimmy Page and Pete Townshend didn’t become guitar gods overnight. And since we all have to start somewhere, here’s a compilation of some of the easiest guitar solos you can learn:

I sure hope I’m not the only one to put the first minute of this video on repeat. It just gives you all sort of feels. And can I just say that this guy’s one of the best teachers I’ve ever seen thus far. It’s clear, straight to the point and no BS kind of tutorial. Still though, it will take a lot of practice but even with blistered fingers, I guarantee you it will be worth it.

Fun Fact: During one of their shows last year, Axl Rose was having so much fun on stage that he tickled Slash halfway through the guitar solo of “Knockin’ on Heaven’s Door.” Yep, it was a rare but refreshing sight.

Marty does a fine job with the guitar lesson and you’ll probably graduate from being a newbie in no time!

If you’ve given up on playing the guitar, this might convince you to dust it off and go back to practicing. Who doesn’t want to learn this highly addicting solo? It’s one of my favorite parts of this Bon Jovi classic. It should be a crime not to like this. It may have been released more than 30 years ago but it still sounds so cool until this day.

“I think the most interesting part of that song, it was the first time we ever used characters. And quite frankly it was because in our life at that point, in that juncture of time, we were 26 years old. I was. Jon was probably 24 at the time. And all we knew at that point was being on the road and women, so that’s predominantly what we kind of sang about in those days. Then we decided to jump into the social lyric with ‘Livin’ on a Prayer,’ and bring in two characters, Tommy and Gina, which essentially were some blue collar people trying to make ends meet through life, and essentially that was my parents. It could’ve been Jon and I in that particular part of time.” – Richie Sambora to Fuse TV

It sounds cool and something you might need to work on a few times to get right. It’s a killer tune, for sure and one that’s not exactly difficult to learn.

Marty is here again and well, it’s only a testament to how he makes everything seem easy including the guitar solo from one of Nirvana’s most popular tracks – “Smells Like Teen Spirit.” Like his other tutorials, he makes it relatively simple. As long as you follow closely, you can learn it in less than 15 minutes but of course, it depends on how dedicated you are. But really, even if you just picked up your first guitar, you won’t break a sweat with this one.

“I was trying to write the ultimate pop song. I was basically trying to rip off the Pixies. I have to admit it. When I heard the Pixies for the first time, I connected with that band so heavily that I should have been in that band—or at least a Pixies cover band. We used their sense of dynamics, being soft and quiet and then loud and hard.” – Kurt Cobain to Rolling Stone

Once you’re done with this tutorial, you will want to give Marty a very big hug.

This guy just nailed THE Brian May sound and the killer tone is seriously one for the books. It sounds so close to the original. If I close my eyes and just listen, I probably wouldn’t even know the difference. And another bonus point is, his short clip is easy to follow and concise. Even without using any words, it’s still crystal clear.

“I thought it was a lot of fun, but I did have an undercurrent feeling of, ‘aren’t we talking about danger here,’ because we were worried about Freddie at this point. That feeling lingers, but it’s become almost the most successful Queen track as regards to what people play in their car or at their weddings. It’s become a massive, massive track and an anthem to people who want to be hedonistic. It was kind of a stroke of genius from Freddie.” – Brian May

I understand the skepticism because Angus Young is one of the greatest guitarists in rock and AC/DC riffs aren’t exactly the first things that come to mind when we talk ‘easy guitar solos.’ But really, this lesson is simple enough for beginners to follow. He doesn’t beat around the bush and goes immediately to the important stuff.

“The boys had a title. Malcolm and Angus [Young] said, ‘Listen, we’ve got this song. It’s called ‘Shook Me All Night Long.’ That’s what we want the song to be called.’ And if you listen to the chords, [the chorus] just fell into place so I can’t claim any credit on that thing. It was as quick as it had to be, which was that night. I guess I had to try and impress somebody. It was just a thing that came at the time, and I still think it’s one of the greatest rock and roll riffs I’ve ever heard in my life.” – Brian Johnson

Compared to the first four tutorials, this is probably the one that requires more patience and practice.