7 Cheesiest Rock Songs We May or May Not Hate 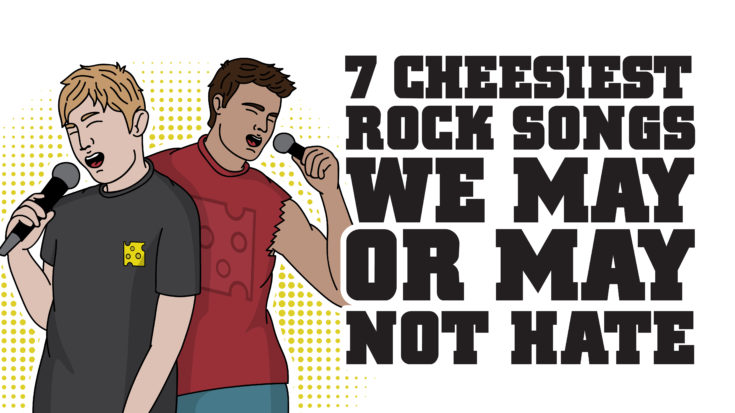 We have a love/hate relationship with the following songs. We don’t know if it’s because they’re overrated (the kind you hear on every single radio station every single day) OR because their lyrics are filled with nothing but cheesy goodness. Either way, we actually like some of these but others, not so much.

What We Love: It’s catchy.
What We Hate: The vomit-inducing lyrics.

“In my life there’s been heartache and pain
I don’t know if I can face it again
Can’t stop now, I’ve traveled so far, to change this lonely life
I want to know what love is, I want you to show me
I want to feel what love is, I know you can show me…”

Okay, this guy isn’t just a whiner, he is extremely needy as well. He’s the type who’ll text you every minute of every day asking what you ate for lunch or if you thought about him while working. Seriously, dude, just stop. We know this is Foreigner’s biggest and most enduring classic hit and we actually understand the appeal – a few repeats and the song won’t leave your head for days. But the more you listen to it, the more if feels like you’re looking at someone clawing her nails on a chalkboard – it’s annoying and you just want it to stop.

What We Love: Everything – well, almost.
What We Hate: Head-scratching lyrics and overall, overrated and corny feel.

Don’t get us wrong, plenty of rock ‘n roll tracks are cheesy one way or another. It’s probably because we’re sort of drawn to stuff like this. We say we don’t like it but we refuse to change the channel when it comes on the radio. Anyway, Bret Michaels wrote this at a motel’s laundry room after he was devastated when he called his girl and heard a male voice in the background. He also said, “I was trying to capture being at that point in your relationship where it’s not officially over, but it’s over.”

Twisted Sister’s Dee Snider was unforgiving when he commented, “Hey man, it was them motherf*ckin’ “power ballads”, you know! Brett is gonna kill me for saying this but “Every Rose” completely killed the metal in the pop metal scene man. All of a sudden, all the heavy metal rock bands got rid of their distortion pedals and went f*ckin’ acoustic.” When Snider calls you out, you know you did something wrong. Lol.

3. Def Leppard – “Bringin’ on the Heartbreak”

What We Love: It’s a solid hard rock tune.
What We Hate: It’s cheesy enough to be covered by pop star Mariah Carey.

It’s not really THAT bad, in fact, we like this song. It’s fun and it screams ‘80s hard rock all over. Besides, it does remind you of your ex, doesn’t it? When they’re there, it grates on your nerves but when they leave, you start to miss them. That pretty much sums up how we feel about this track. It’s a big ball of cheese, sure, but just when we forget it ever existed, we long to listen to it again. But to be honest, even if this track topped every list of the cheesiest songs ever, we’d still play it. Besides, Def Leppard’s legendary. Enough said.

What We Love: It has a nostalgic feel.
What We Hate: The official music video.

“Now, don’t hang on, nothing lasts forever but the earth and sky
It slips away, and all your money won’t another minute buy…”

Even if it’s highly overrated, we love this song – the melody is so nice and relaxing. Sure, the message and tune are a bit melancholy but it’s a great track to listen to when you just want to calm your nerves. The arrangement is simple yet somehow, it really works. Besides, it might as well have been released yesterday because it definitely echoes through generations. It’s speaks of a universal truth even if the words have a hint of cheesiness in them. And there’s just so much raw emotion and soul when it came to the vocal performance. But yes, as we mentioned earlier, we’re not that thrilled with the music video. And no, you cannot convince us that isn’t stuffed with a big chunk of mozzarella.

What We Love: We’re not really sure about this one.
What We Hate: Our lives would be fine without ever knowing what the lyrics are about.

“All I wanna do when I wake up in the morning is see you eyes
Rosanna, Rosanna
I never thought that a girl like you could ever care for me, Rosanna…”

In terms of cheesiness, this one takes the cake. It’s one of Toto’s most successful singles and we’re not surprised at all – everyone probably knows this song including your grandparents and every single aunt and uncle in your family. This was a hit back in the day – so much so that hearing the intro makes you want to reach and turn off the radio. You know what they say, too much of something is bad enough. Lol. Anyway, there’s an interesting story behind it. According to David Paich, “’Rosanna’ was about a high school love, one of my first loves, but I just tagged another Rosanna’s name on there because she was going at the time with Steve Porcaro, my best friend. He had just met her and was looking to title a song with her name, and it just fit perfectly for that song right there. So it’s got her name on it, but it’s really about another high school sweetheart, which is how songs happen sometimes.” Uhm, okay.

What We Love: It’s a seriously good song – a real classic.
What We Hate: The title and lyrics don’t make much sense.

This is one of those songs best sung without paying any heed to the words. We don’t even know where to begin – the vocal harmonies are exquisite, the melody is amazing. It topped the charts in several countries and even received gold certification. Of course, the band received some criticism with their odd choice of words for the lyrics – you know what we mean. Still though, they can get away with it because the fact of the matter is, it’s a great song. It may be coated in melty, gooey, cheesy goodness but we don’t mind. Besides, the fact that Breaking Bad’s Walter White sang this while on a road trip just made it more badass.

What We Love: The tune, the riff, the melody.
What We Hate: It’s sprinkled with lots of parmesan.

Judging the words alone is enough to make you cringe but when you look at the whole picture, it clicks. We can’t really put a finger as to how this iconic ballad managed to transcend through time and generation (it makes us incredibly happy hearing kids sing this song) but we’re mighty glad it did. Nuno Bettencourt said, “People use it so easily and so lightly that they think you can say that and fix everything, or you can say that and everything’s OK. Sometimes you have to do more and you have to show it—there’s other ways to say ‘I love you.’” So in a nutshell, there’s another cheesy way of saying it without sounding too obvious. Lol.