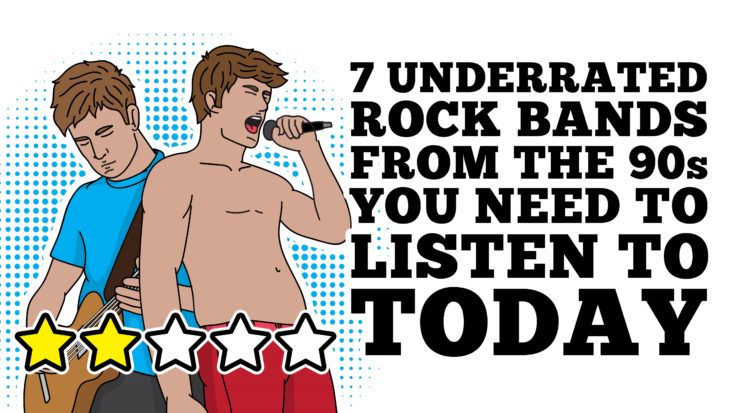 The ’90s music had its highs and lows but we still think it had so much to offer when it came to rock. Sure, it’s peppered with cheesy bands and overrated songs (which are a bit tacky too) but the era also gave us some underrated musicians who deserve some attention and appreciation.

What You Need To Listen To: “No Rain”

They will change your mind about the ‘90s. You might even think the decade was pure magic. Blind Melon was formed with two members (the guitarist and bassist) who came from Mississippi and met their vocalist Shannon Hoon who hailed from Indiana. It was back in March 1990. Hoon was friends with Guns ‘n Roses frontman Axl Rose and he even provided backing vocals for some of the tracks of their Use Your Illusion I and II albums. Blind Melon also hit the road on a tour in support of Soundgarden. Their self-titled debut album was a commercial failure but thanks to the regular airplay “No Rain” received from MTV, it helped the band reach an international audience until the album was eventually awarded with the quadruple-platinum certification. Still, however, the group is unfairly overlooked most of the time. So if you haven’t listened to any of their songs yet, now’s the chance to rediscover something from the ‘90s.

What You Need To Listen To: “If You Could Only See”

Does anyone else feel the need to turn back time now? ‘90s isn’t exactly the best decade in rock but it sure had its moments. Take this gem for example. Tonic was an alternative rock, post-grunge band who earned two Grammy nominations. Is that even surprising? This group showed us how music should be made – with soul. Founded by long-separated childhood friends, Emerson Hart and Jeff Russo suddenly crossed paths at a pool hall in Los Angeles, California. After agreeing to collaborate, they added bassist Dan Rothchild and drummer Kevin Shepard to their lineup. They played gigs around the area before landing a record contract in 1995. Music critic Shawn M. Haney wrote about Tonic’s debut album saying, “The record as a whole is full of the heavy, distortion-laden Tonic sound, and guitars that make them who they are.” They should easily be among the top bands in this era.

3. Temple of the Dog

What You Need To Listen To: “Hunger Strike”

We’re actually baffled why Temple of the Dog didn’t get the attention they so rightly deserved. This semi-supergroup consisted of members from other legendary bands like Soundgarden and Pearl Jam. At one point, Eddie Vedder even had a special appearance by providing the lead and backing vocals. Now that’s supposed to be something, right? Sadly though, they’re underrated. Chris Cornell founded the band and the first recording materials he wrote were melodic and slow – a bit far from the music he made with Soundgarden. He even said this about his duet with Vedder on “Hunger Strike”: “He sang half of that song not even knowing that I’d wanted the part to be there and he sang it exactly the way I was thinking about doing it, just instinctively.” Also their album received some pretty favorable reviews, it wasn’t a huge success since it failed to chart. Rolling Stone’s David Fricke even commented that it “deserves immortality.” Enough said.

What You Need To Listen To: “Starseed”

Sometimes, it boggles us why music videos like this only get a million hits while other trashy and vomit-inducing songs get more than 100M views. Why, just why? There are people who don’t like the group because they just don’t offer anything new or spectacular or stuff that makes you say “Wow.” We beg to disagree. They released timeless tunes like “Somewhere Out There” which sound so amazing even until today. This is one of the tracks you wish you learned to appreciate back then – you know, when music wasn’t all about booty, twerking and auto-tune. “Starseed” in an absolute masterpiece, we always get chills listening to it. Their vocalist Raine Maida was once referred to as “truly unrivaled” in the vocal department. This alternative rock act had their hit singles and their debut album “Naveed” sold over 480,000 copies in Canada by 1998.

What You Need To Listen To: “Feed the Tree”

Their most successful single, “Feed the Tree,” ranked at no. 24 on VH1’s list of “40 Greatest One-Hit Wonders of the 90s.” That’s not bad, right? Thanks to the heavy airplay from MTV, the band ended up with two Grammy nominations and also sold around 800,000 copies of their album in the US. But still, that’s the only thing most people remember about them, if at all. And it’s unfortunate because they’re a really good rock act. Their music isn’t as heavy as others but it’s catchy enough and the lead vocalist’s raspy voice is the perfect cherry on top. They only released two albums and the group split up after the release of the second one – and yes, you need to listen to both. It was in 1993 when they hit the road on a joint headliner tour with English rock band Radiohead.

What You Need To Listen To: “Far Behind”

There are so many things going on in their music but in a good way. They infused grunge, hard rock, alternative, metal and blues. Their self-titled debut album was a huge success and it sold four million copies. Some of their biggest hits include “Far Behind” and “You.” Their second album received gold status but it was the start of their decline in popularity. Their not-so-popular songs that didn’t chart are still worth your time, however. They’ve had several remarkable and outstanding performances. They sound the same live as they do on recording, if not, even better. The group just oozed with talent and while they rose to fame and enjoyed the limelight even for just a short while, we’re still mighty glad we were introduced into their music. It’s no wonder why they earned a slot at Woodstock ’94. Listen to “Cover Me” and we’re sure you’ll love them too.

What You Need To Listen To: “This Way”

You’ve probably already heard this but maybe you just didn’t know the title of the song and who sang it. Well, it’s Fastball who used to call their group “Magneto U.S.A.” Okay, we are just so glad they decided to change it otherwise, we’d think they’re a bubblegum pop band. Lol. They had so much to offer for all alternative and pop rock fans. It’s relatively common for people to mistake them for singing “Closing Time” and even “Counting Blue Cars,” but the thing is, their music didn’t sound like any of those. Fastball received two Grammy nominations and their second album, “All The Pain Money Can Buy” earned platinum status just six months after it was released. Although they scored several hits, the third wasn’t as successful since it sold only 85,000 copies. Then again, you can still find numerous musical gems in their catalog.