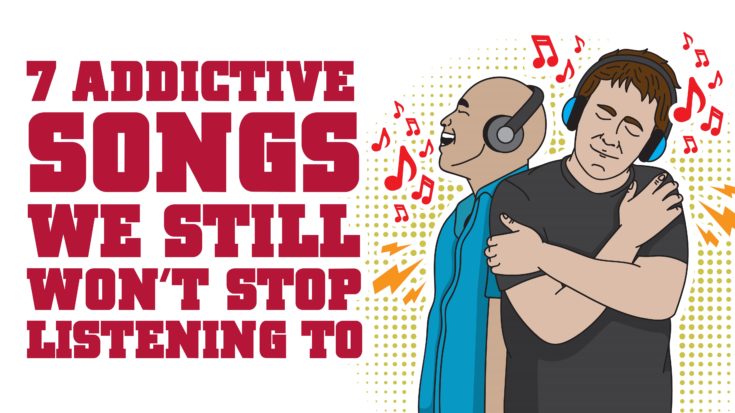 Don’t Say We Didn’t Warn You

You may not like all the songs in this list but one thing’s for sure, these are all highly addicting. It’s like you hear them on the radio, the tune keeps on repeating inside your head and you just can’t shake it off. Well, we call that ‘earworm’. It sounds a bit disgusting but that’s what it is.

This isn’t exactly our ultimate favorite soft rock song but we’d be lying if we say it didn’t get stuck in our head at least once. During those days, we wished it would be easy to pluck it out – you know, what people called the ‘Last Song Syndrome’. You’re probably going to hate us after listening to this because you will likely end up singing it over and over again.

Oh and we basically heard this everywhere – it was featured in three films (‘Never Been Kissed’ in 1999, ‘Hot Rod’ in 2007, and ‘Hot Tub Time Machine’ in 2010) and the TV series DC’S Legends of Tomorrow. It gives you that nostalgic feeling when you had the same hair and wore the same clothes as those guys from Cutting Crew. We have no idea what it is about this song that made it so addictive – is it the simple lyrics or the tune? Maybe we’ll never know.

Everything about this song screams ‘80s vibe including the music video (which is a bit cliché and was only saved by the face-melting solo). It takes us to those good ole days when this was a mainstay in the airwaves. If today’s kids want to have an idea what it was like living in that era and how was rock back then, just make them listen to this and show them the MV. AllMusic’s Steve Huey was on point when he described the whole album as “a more subdued, polished collection seemingly designed for mainstream radio airplay.” Some say it wasn’t Malmsteen’s finest work but then again, he was still recovering from a car accident a year before so there’s that. Besides, you can feel the soul of the ‘80s and that’s why we love it. So why is it addicting? That’s probably because of the catchy chorus. *cue singing*

There are tracks that get stuck in your head for hours or days. Then there’s Nirvana’s classic hit that won’t leave you for years. Did you ever have that moment when you’ve forgotten the song’s existence (well maybe that’s a bit of a stretch but you understand what we mean) then someone sings even just a few lines from it and boom, you’re back to square one. It’s a good piece, don’t get us wrong, but it’s so addicting that sometimes, it feels like the music just came out of nowhere and decided to lodge deep into your brain. And no matter what you do, you just can’t get rid of it. You can ask people to name one Nirvana song and they’ll likely answer ‘Smells Like Teen Spirit’ well that is, unless they’re a hardcore fan and know most of the band’s catalog. Besides, it’s already 2017 and this still rocks. Just wow.

The fact that this Europe classic hit topped the charts in 5 countries should say it all. The intro alone is something that would likely stay with you for days on end. Besides, most people think about this song on the last day of the year but who can really blame them, right? Let’s be honest, how many of you played it last New Year’s Eve? Because we did and it’s become sort of a tradition. It’s so dang catchy and a few days into 2017, it still feels like it suddenly pops into our heads. It’s no wonder why they call it earworm – it’s all good at first until it becomes pesky because it’s so addictive. It’s like the ex-girlfriend who won’t leave you alone and who shows up practically everywhere. Lol. Then again, this is proof of the era when people poured all their soul and talent into each song.

The first time you hear it, it’s fun and catchy. Then you play it a couple more times and you start to get a certain fever of the song. Sure, you can’t get enough of it but eventually, it gets so addicting you just can’t shake it off anymore. It’s as if the track decided to have a permanent home in your head and then randomly appear even when you’re not thinking about it. This never gets old, though. And when it starts playing, we feel compelled to sing along and maybe headbang while we’re at it – it’s like we’re committing a sin against Tommy and Gina if we don’t do so. Lol. It’s a good song and perhaps the secret lies in the rhythm. Take all the lyrics away and if we’re left with only the rhythm, we’re still fine.

P.S. We badly need music like this again – you know, something as kick ass as this.

Is anyone even surprised that Journey’s magnum opus made it to this list? It’s epic and a classic masterpiece. Maybe part of the reason why it’s addicting is because Steve Perry has one of the greatest voices in rock – the guy sounds way better live than any recording. But we believe the main culprit is the rhythm and melody. It just makes you feel so calm and happy – not many tracks can manage to accomplish that feat. This is the kind of song that makes you smile when it comes on – and yes, every single time. And we can’t even begin to count how many times we’ve put this on loop – it’s so good like that. You can call it earworm, Last Song Syndrome or highly addicting. No matter how you refer to it, Journey definitely deserves a spot here. Everyone can probably relate that at one point, they got so addicted they played this at least five times in a row.

Remember the time Queen was voted the happiest song ever which was also backed by research studies? Well, they did it again. Freddie Mercury and the boys didn’t land number one on this list just because we feel like it. Again, there’s scientific proof thanks to scientists and researchers from the University of St Andrews. They managed to have two tracks in the top 20 – the other one is ‘Bohemian Rhapsody’ of course.

How did they come up with this? They used a mathematical formula: Receptiveness + (predictability-surprise) + (melodic potency) + (rhythmic repetition x1.5) = earworm. According to Bede Williams, “If you look at the songs which emerged from the research, they all have a distinctive rhythmic fingerprint. If we remove the melody, they’re still recognisable by their rhythm alone.” Okay, we rest our case. And it’s not like we needed proof that Queen made addictive songs, we already knew that. Lol