The 10 Greatest Rock Debut Albums Of All Time 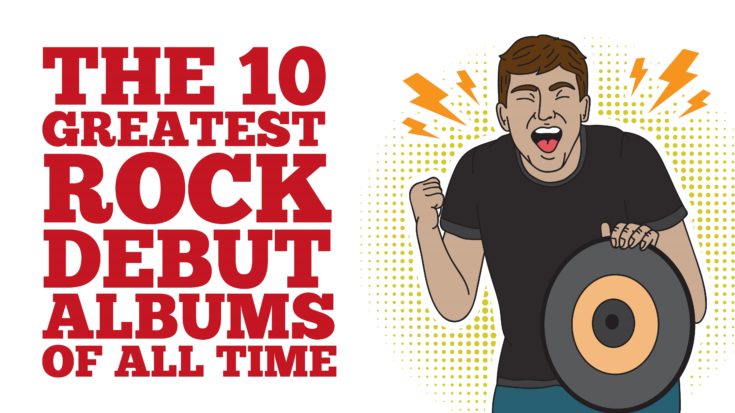 How Legends Are Made

From small nightclubs to soldout stadium shows and garage jamming sessions to record deals and multi-million sales; these classic rock artists had to start somewhere. The world was ready for an introduction and they gave people the best they had to offer:

Their debut album had charisma. And it must be duly noted that the band wanted a simple rock sound which is why there weren’t significant enhancements during recording. So what did they achieve? Pure rock ‘n roll. And they made this genre exciting once more. In just a year, The Strokes went from small gigs to being on the cover of glossy magazines and the talk of the town in the rock music scene. The songs are tightly constructed and seemed to be on a frenetic pace. But they didn’t disappoint us one bit. Of course, it was a commercial success and the reviews they received were generally positive. According to Heather Phares from AllMusic, “Granted, their high-fashion appeal and faultless influences … have ‘critics’ darlings’ written all over them. But like the similarly lauded Elastica and Supergrass before them, the Strokes don’t rehash the sounds that inspire them—they remake them in their own image.”

‘Big Pink’ was the house located in Woodstock, New York and shared by Rick Danko, Richard Manuel and Garth Hudson. The group was Bob Dylan’s backup band for his 1965-1966 tour and so they moved to NY so they can stay close to the legendary folk rocker after his motorcycle accident. Here, they recorded a bunch of materials which were later called ‘The Basement Tapes.’ While Dylan was more than willing to play for the debut, the band didn’t think it was such a good idea. According to Levon Helm, “We didn’t want to just ride his shirttail.” And that was a great move on their part because by the time “Music From The Big Pink” was released, they already half-cemented their place in classic rock. Nevertheless, Dylan contributed three tracks including “I Shall Be Released” and co-wrote “Tears of Rage” and “This Wheel’s On Fire.” Rolling Stone’s Al Kooper wrote about it saying, “This album was recorded in approximately two weeks. There are people who will work their lives away in vain and not touch it.”

So what’s the best way to introduce your band to the world? Well, it’s by releasing a self-titled album with a breakthrough track like ‘Light My Fire.’ Do that and people are bound to notice. 1967 was a good year in rock music – there were albums like The Beatles’ “Sgt. Pepper’s Lonely Hearts Club Band” and The Who’s “The Who Sell Out.” But nobody was prepared for Jim Morrison’s mind-blowing poetry, sultry voice and charisma which everyone had a glimpse of. This was their way of saying that they’re not a one-hit wonder. Besides, it contained some of the groups most popular compositions like “The End” with its Oedipal spoken word and “Break On Through (To the Other Side).” Rolling Stone’s Parke Puterbaugh wrote, “the L.A. foursome’s most successful marriage of rock poetics with classically tempered hard rock — a stoned, immaculate classic.” It was hypnotic and a great way to unleash the group’s musical brilliance.

It was this album that changed the face of rock ‘n roll. Eight out of fourteen songs were credited to Lennon-McCartney. That alone told fans that they were more than a run-of-the-mill group. This was released in order to capitalize on the success The Fab Four enjoyed with their track ‘Please Please Me.’ In just a little over 12 hours, The Beatles managed to finish recording ten songs and the result was a brand new sound (created by their stellar vocal harmonies) and proof of their versatility – they could go from R&B ballads to pop and pretty much everything in between. It showcased what they were all about – seemingly boundless energy which was most evident in their classic hit “Twist and Shout.” And don’t even get us started on John Lennon’s beautifully hoarse voice. Although it wasn’t a huge hit after its release, it was nevertheless a somewhat explosive way of showing what The Beatles were made of.

When they arrived in the music scene, Van Halen was the ultimate hard rock group and the genre was never the same way again. Their debut album featured some of the band’s signature songs like “Runnin’ With The Devil” and “Eruption.” Of course it helped that Eddie Van Halen’s face-melting guitar work was on another level and he practically raised the bar for every axe-wielding rocker. They didn’t skimp on anything and on the contrary, they delivered MORE of everything. The secret was simple: they stepped up their game. It was revolutionary and wild on so many levels. While the initial reception of the album was negative, AllMusic’s Stephen Thomas Erlewine wrote “The still-amazing thing about Van Halen is how it sounds like it has no fathers … Like all great originals Van Halen doesn’t seem to belong to the past and it still sounds like little else, despite generations of copycats.” There’s definitely no argument from us on that.

Most famously referred to as ‘prophetic’ by the Rolling Stone magazine, this album presents punk and psychedelic rock in its purest, rawest and unadulterated form. The Velvet Underground was a powerhouse group and had so much to offer. Initially however, it was a commercial failure (mostly because of its controversial songs which got it banned from record stores and radio stations refused to play the tracks) and critics didn’t even bother reviewing and commenting on it. A decade later, fans and critics started noticing it. Since then, it has always made it to the top albums list. Colin Larkin wrote in The Encyclopedia of Popular Music that it “introduced Reed’s decidedly urban infatuations, a fascination for street culture and amorality bordering on voyeurism.” This was highly influential and artist Brian Eno once commented about the financial failure of the initial sales by saying, “everyone who bought one of those 30,000 copies started a band.”

If there’s one word we like to use to describe the debut album of Guns ‘n Roses, it would be ‘unapologetic.’ Axl Rose always had that devil-may-care attitude on and off stage and fans loved it. “Appetite for Destruction” enjoyed massive commercial success with 30 million copies sold worldwide and it became the best-selling album of the ‘80s. It basically propelled them into international stardom. And the boys brought something different to the plate. From Axl Rose’s impressive vocals to Slash’s energy-filled bluesy guitar work and the band’s rebellious themes – it was a match made in musical heaven. They had the funk and swagger and they raised the bar for all the hard rock groups everywhere. Classic Rock magazine’s Ric Albano wrote that “this band would never again reach this level of importance and breakthrough originality.” While there are those who think it’s overrated, we can’t deny the fact that it became a turning point for rock at the time.

The Ramones were playing in clubs before they signed a record deal. It was Editor Lisa Robinson from Rock Scene and Hot Parader who first wrote about them in several issues and it was then that word got out about the group. They eventually got signed up and started recording. The whole album was just 29 minutes long, took a week to record and cost a little over $6000. It opened with their signature song, “Blitzkrieg Bop” and it may have been a commercial failure after its release but it was eventually recognized for its importance and significance across numerous genres of rock. Time’s Theunis Bates wrote “Ramones stripped rock back to its basic elements … lyrics are very simple, boiled-down declarations of teen lust and need” and added that it “is the ultimate punk statement.” Though they lacked mainstream success, the band was undoubtedly one of the most influential rock acts of all time.

This is a psychedelic masterpiece that’s incomparable to anything and it only proved that Jimi Hendrix was a league of his own. It’s not fair to compare him to other axemen because let’s face it, his guitar skills are not from this world. Putting all the showmanship aside (playing behind his back or using his teeth), he’s definitely a rock god. “Are You Experienced?” had everything – it showcased his mind-blowing innovative techniques and soulful, melodic music. According to Rueben Jackson of the Smithsonian Institution, “it’s still a landmark recording because it is of the rock, R&B, blues … musical tradition. It altered the syntax of the music … in a way I compare to James Joyce’s Ulysses.” So it’s not surprising that it enjoyed tremendous commercial success and just seven months after its release, more than one million copies were already sold! It was definitely what psychedelic rock should be like.

When Led Zeppelin dropped their debut album, it was mind-boggling how the fusion of blues and rock could sound so flawlessly good. It’s not even surprising why they immediately gained a large fan base all over the globe. Although it achieved commercial success, critics weren’t exactly enthusiastic about it after its release. It’s a good thing they were able to come to their senses and recognize this greatness. The album sounds tight and cohesive, it was both powerful and astonishing.

Incredibly so, Led Zeppelin only spent a total of 36 hours in the studio to finish recording it. Why was it that fast? According to guitarist Jimmy Page, “[the band] had begun developing the arrangements on the Scandinavian tour and I knew what sound I was looking for. It just came together incredibly quickly.” They may have received poor reviews at the beginning but in 2006, the Rolling Stone magazine published: “[The album] was pretty much unlike anything else. The arrangements were more sculpted than those of Cream or Jimi Hendrix, and the musicianship wasn’t cumbersome like Iron Butterfly’s or bombastic like Vanilla Fudge’s. The closest comparisons might be to MC5 or the Stooges – both from Michigan – yet neither had the polish or prowess of Led Zeppelin, nor did Led Zeppelin have the political, social or die-hard sensibility of those landmark bands. What they did have, though, was the potential for a mass audience.”