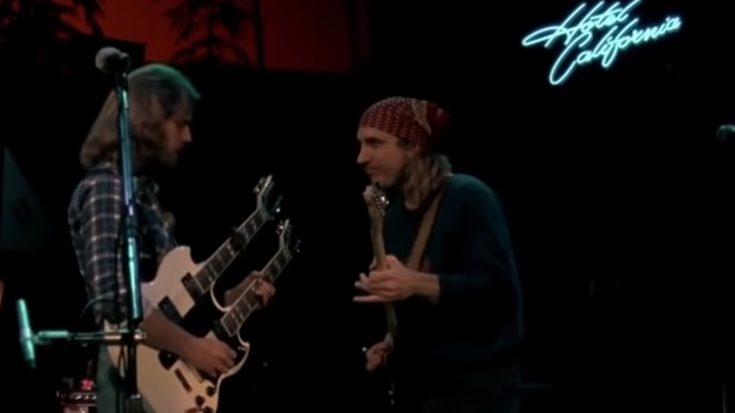 Wanna be the center of attention at the next Sunday barbecue party? Say no more – we got your back with the best guitar tutorials from one of the critically-acclaimed rock bands in history, the Eagles. The band has had an interesting journey, starting off as a backing group for femme fatale rocker Linda Ronstadt and eventually making a name for themselves. While most branded the Eagles as a country-rock band, the members themselves warded off the idea as they were capable of things more than that. Without further ado, here are some of the best guitar tutorials of Eagles songs you can learn in a jiffy!

First off in our list is the easygoing song, “New Kid In Town” from the Eagles’ quintessential 1976 record, Hotel California. Youtube channel GuiTabs has a great video on how to play the song with the basics down, from tuning to the breakdown of individual guitar parts. The video even shows chord shapes, strumming patterns all slowed down for beginners and intermediate players to catch up easily.

We get it, you want to brag “Hotel California” with your friends. But it isn’t the easiest Eagles song to pull off – factor in the multiple guitars and solos you have to do – unless you settle for the rhythm section, which Youtuber Marty Music will help with his tutorial video. He focuses on the finger placement for chords and the strumming pattern to get you started with your journey on the dark desert highway.

“Love Will Keep Us Alive” was first unveiled in the Eagles’ Hell Freezes Over Tour in 1994, where Timothy B. Schmit assumed lead vocal duties. If you want to learn this laidback love song, there’s no better way than to watch Monstoy Guitar’s tutorial as it is complete with tabs and actual finger placement per section.

After not writing material together on their debut album, founders Glenn Frey and Don Henley decided to collaborate on their second record, Desperado. Frey came up with a riff that he described as “kinda Orbison, kinda Mexican” in which the foundation of the song took root. Refer to Center Stage Guitar Academy’s tutorial for “Tequila Sunrise” with amazing camera closeups of the finger placements and strumming pattern for a great time on the guitar.

“One of These Nights” – EpicGuitarInstruction

The band didn’t really like the country-rock label so they decided to record something a bit edgier for the fourth studio album, One of These Nights. The title track was what they needed to clear the air, with Don Felder being instrumental in giving the song its signature bite. This simple video from EpicGuitarInstruction is an easy way to get into playing the song.