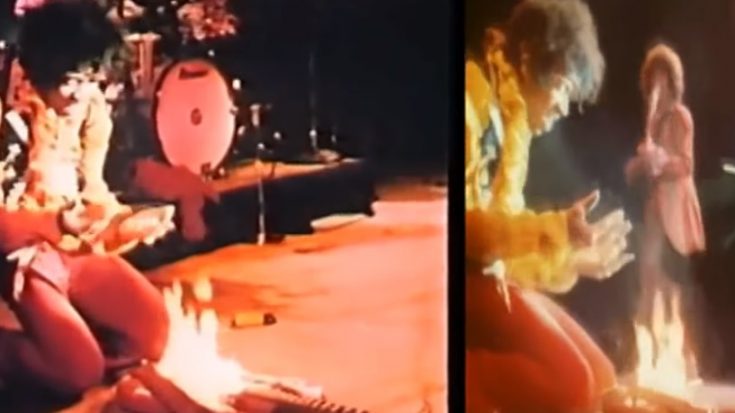 It’s not how the guitar is built, but how one uses it. Yeah, tell that to some of the most iconic guitars owned by rock n’ roll’s highly-esteemed string meisters. While they definitely have the chops that defined their band’s (or solo) works, their instruments play a big part in making the endeavor possible. Here are some of the weapons that made a mark in the history of rock music.

While Harrison was often overlooked in favor of his peers during the Beatles’ heyday, one can’t deny the unique dimension he added to the band’s music and was instrumental in giving the band its esteemed status in the industry. Harrison’s weapon of choice was the 12-string Rickenbacker given to him as a gift by the owner of the company on their first US tour.

Jimi Hendrix didn’t hesitate when he burned his flowery Stratocaster at the 1967 Monterey Pop Festival – which some considered as blasphemy while others took it as an offering to the guitar gods. And while the original guitar met its end onstage on that fateful day, replicas still exist to continue its legacy, which is nothing short of spectacular.

McCartney’s iconic bass guitar had humble beginnings – he spotted it by the window at a little shop when he was 18 and bought it for some £40. It was originally a right-handed Hofner 500/1 violin bass that he turned upside-down but was stolen sometime in the late ’60s. Good thing Hofner gave him a true lefty model as a spare, which he used for the remaining years of the Beatles.

Slowhand’s “Blackie” Stratocaster is part of some of his most iconic cuts, like “Cocaine” and “I Shot The Sheriff”. The guitar sold for almost $1 million during an auction for Clapton’s Crossroads rehab center in 2004, which is quite the feat considering that it was built using parts of three different Strats.

While Page has had a number of iconic guitars like the Dragon Telecaster and Les Pauls in between, none would ever match the imprint left by his double-neck Gibson EDS-1275, which was instrumental in the delivery of “Stairway To Heaven”. The guitar had a 12-string upper neck and a standard 6-string for the lower one.

Prince is often dismissed as a pop star, but the Purple One was a connoisseur of rock as well. He was one of the most versatile artists to ever exist, and his ability to play numerous instruments, especially the guitar, is nothing to scoff at. Prince’s Cloud guitar was custom built by a Minneapolis Luthier, which he used on records like Purple Rain.

Legend has it that B.B. King ran into a burning building to save his $30 guitar, where he knew later that the incident started over a brawl between two men fighting over a woman named Lucille. He started naming his guitars with it, with the Gibson ES-355 adopting their own Lucille lineup as an homage to King’s prowess.

The Grateful Dead’s frontman had the custom-made guitar “Tiger” as his weapon of choice for a good decade since 1979. This was built by Sonoma County luthier Doug Irwin and was built quite heavily, weighing in at 13 lbs. and is made by stacked layers of laminated wood.

When you’re with the hottest hard rock outfit in the world, you don’t need anything else other than that gritty bridge humbucker sound. That’s exactly what EVH did with his Frankenstrat, with the bridge being the only active pickup and is adorned with the signature black, white, and red stripes.

No guitar matched Angus Young’s impish attitude on stage other than the Gibson SG. With a flat body contour and devil-like horns, Young was able to power AC/DC’s heaviest riffs and fun-loving solos without fail. If there’s one person to represent the guitar model, it’s surely Angus.