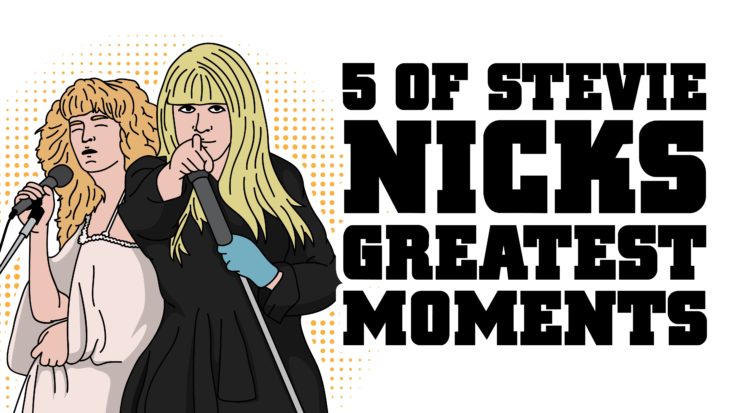 Our favorite witchy godmother and gold dust woman, Stevie Nicks is all about timeless grace. She makes us want to envy her electrifying stage presence, unconventional but trend-setting sense of fashion and of course, her distinctive and highly enchanting voice. It was pretty hard trying to find only five of her greatest moments because if you’ve been a her fan since day one, you’ll know her every performance is nothing short of utter perfection.

A bare-shouldered Stevie just dragged our hearts around. This may be a collaboration with Tom Petty and the Heartbreakers but she didn’t co-write it. In fact, it was originally written as a solo piece but it was record and film producer Jimmy Iovine who arranged for Stevie to lend her vocals to the track because he was working with her at the time. And boy, we’re more than happy she agreed! The song peaked at no. 2 on the US Billboard Mainstream Rock and no. 3 on the US Billboard Hot 100. If anything, ‘Stop Draggin’ My Heart Around’ became a solid proof that Stevie could have a successful career outside of her band, Fleetwood Mac. There’s just a certain intimacy about this that hits you right in the feels – from Stevie’s velvety voice to Tom’s vocals and of course, the unforgettable riffs. It’s a classic, like the song took you on an emotional ride. And aren’t you glad to be a part of this musical adventure?

Have you ever wondered when Stevie Nicks’ witchy woman image began? No, it’s not just her fashion and style. Anyway, it all started at the time this song was released. It’s peppered with something supernatural (fairy tale lyrics coupled with the hauntingly beautiful melody) and even Stevie described it as “a song about an old Welsh witch.” Even though it was a Fleetwood Mac song, it served as Stevie’s breakthrough. Her vocal performance is stellar, with her coppery vibrato that sweeps you off your feet. It was such a huge hit that people were beginning to think Stevie practiced actual witchcraft. According to Mick Fleetwood, Stevie “is not a person that half cooks anything, so her Rhiannon in those days was like an exorcism.” We couldn’t agree more. She has sung this song for decades and yet each time she performs it live, she makes it sound fresh and different. This is beyond perfection.

There are so many bittersweet memories and undisclosed passion behind this masterpiece. Just listening to it unleashes a flood of emotions and while the studio version is great, nothing beats the live performance. The raw, almost palpable tension is there and it will hit you right in the feels. It’s poignant in more ways than one and that’s perhaps the reason why many consider it as Stevie’s signature track. Thanks to various artists who covered it, ‘Landslide’ has eventually become one of Fleetwood Mac’s most enduring songs. It’s like in a little over four minutes, there’s so much history of love and pain and it resonates with the audience. That has always been Stevie’s appeal. You’ll be listening to her one minute and crying the next. Stevie wrote this in her 20s and at a point in her life when she was at a crossroads. It’s a very emotional song and Stevie’s vocal sounds (including her throaty musings) just wrapped up this musical gift perfectly.

Despite so many timeless beautiful songs, this was Fleetwood Mac’s only no. 1 hit. With all the internal tension and relationship problems among the band members, Stevie emerged with her greatest work on her and Lindsey’s incessant and controversial bickering in their songs. It was while they were going through a painful breakup (after an 8-year relationship) and a very public one at that. Stevie wrote about all the emotional turmoil, loss and scars in their romantic battleground and she channeled that to us. Although there’s a light, carefree vibe to the song, the lyrics say otherwise. The accompanying drums felt like a heartbeat and the riffs almost ‘sound’ like your tears. Stevie understood that heartbreak is a universal feeling – everyone can relate to it. It was like an anthem to anyone who knows what it’s like to be broken-hearted and we were sort of helping each other get through the pain and yearning.

Widely considered as one of Stevie Nicks’ finest songs, it was an interesting time for her. She wrote it after her breakup with Lindsey and her adjustment to her ‘new’ life especially because she just came back from her solo outing which was a massive success. It felt nostalgic because she was looking back at her life with Lindsey before they became famous and lived a lot like ‘gypsies.’ She was still struggling to make both ends meet at the time. And one part of the song was dedicated to Stevie’s friend, Robin Snyder Anderson, who suffered from and passed away due to leukemia. The line, “I see your bright eyes” was for him. So basically, she had plenty of material to work with. The thing is, the official music video for ‘Gypsy’ had a very high budget but it was worth it because Fleetwood Mac became the recipient of the first ever “world premiere” treatment by MTV.

Many may not agree with out pick for no. 1 but hear us out. This is the nasty revenge of Lindsey Buckingham when his relationship with Stevie was crumbling into pieces. While some would prefer keeping it private, that’s not how Fleetwood Mac works so Lindsey wrote it out for everyone to hear what he has to say. It’s not a subtle stab, instead, it’s like Lindsey took out the subject’s heart and held it out for everyone to see. The guitar part was charged with an electrifying energy filled with frustration and rage. So why is this Stevie’s greatest moment? Because for all the hatred directed towards her in the lyrics, Lindsey’s cherry on top was letting her sing on it. She sang harmonies to some of the most bitter and venomous lines in the track and if it were just any vocalist, they could have easily refused but not our queen. Instead, every time they had to perform this live, she goes on stage and rocks the heck out of the song like the goddess that she is. And ladies and gentlemen, no one can top that.