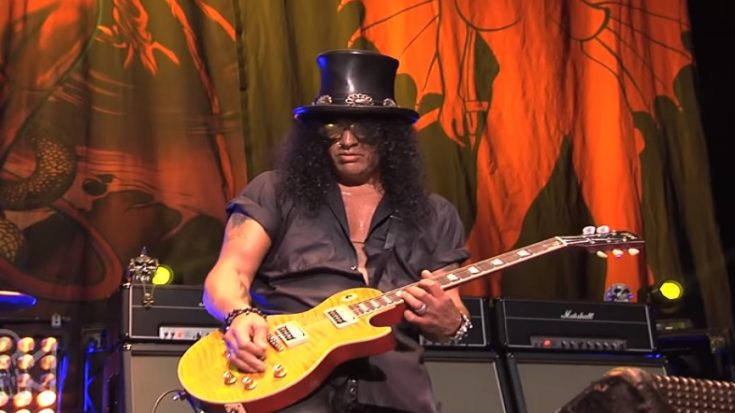 The glorious guitarist by the name of Saul “Slash” Hudson is nothing but an extraordinary man behind the famed instrument. Considered as a “Riff Lord” among various rock websites, Slash’s unique ability to perform earned him a spot as one of the “greatest guitar players” of all time. Aside from Guns N’ Roses’ most iconic hit single “Sweet Child o’ Mine”, Slash’s list of spawning remarkable guitar riffs throughout his career is a never-ending one for the taking. Below are the top 5.

“Always on the Run” – Lenny Kravitz

Slash and Kravitz both went to the same high school back in the day, so it’s not a surprise that Kravitz asked him for a little favor in terms of creating a refined fretwork for his song. Slash never did hesitate on procuring the fiery mid-guitar solo’s groove, and Kravitz made it 10x better when he shouted “Slash!” from the beginning of it.

The taste of “November Rain’s” music contains everything that you would assume as both outrageously bombastic and brilliant. Aside from its ever-iconic music video with Slash sniveling on his unplugged guitar and shirtless in front of a chapel, great riffs were also displayed turning the mellow harmony into a full-blown heavy rock lead.

A display of subtleties, countenance, and quality, Slash went on another lane to construct its Bach-like arpeggios that symbolize the overall theme. It mostly adds flavor and intensity to this classic blues-rock song.

A new band formed by the previous GNR members, Velvet Revolver’s introductory single was the primary attention grabber for the old and new fans alike. The rise of fame mainly points out Slash’s powerful guitar control and the fact that the song metaphorically slithers inside your mind when you listen to it.

You thought that the use of synthesizer would be the highlight for this one, but it was Slash’s performance that completely stole the record. It will always remain as a masterpiece of Slash’s art and his legacy that empowered him for many years.