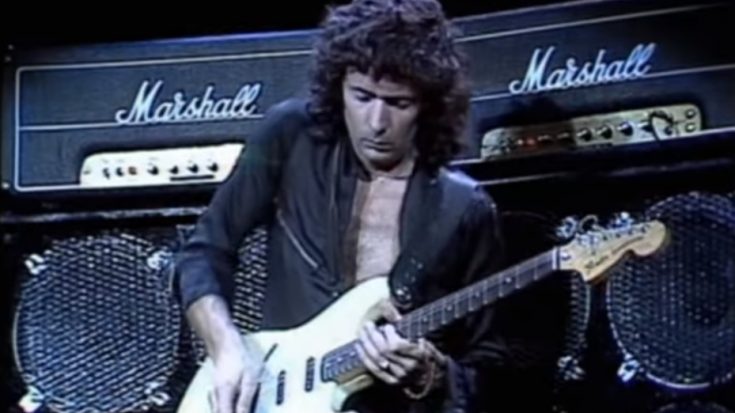 Guitar meister Ritchie Blackmore doesn’t the credit he deserves in comparison to some of his rock guitarist peers. His work, especially the ones with Deep Purple and Rainbow, has been instrumental in heavy metal as his neoclassical choice of arrangements and hyper-fast style makes their songs unique from contemporaries. Blackmore’s solos are also highlights of these hit classics, which we will dive into in this article.

Hailing from the 1984 album of the same name is one of Deep Purple’s crowning moments, “Perfect Strangers”. The song sports an unorthodox approach in its arrangement where Blackmore doesn’t really have a “typical” solo per se, but he makes up for it with some tasteful phrasing lick for lick.

Rainbow didn’t hamper Blackmore’s knack for fictional tales of magical lands far away, as the case is in “Stargazer”. The axman shows his prolific skill in the instrument in a scathing solo that matched the intensity of Ronnie James Dio’s own performance.

David Coverdale has Deep Purple to thank for his exposure in this record, where Blackmore shines like he always does. Innovation paved the way for him to reinvent George Gershwin’s Fascinating Rhythm hook into his riff. As per usual, the solo is rated for the highest echelons in rock history.

“Child In Time” is definitely one of the most fickle rock songs to be ever put out. The playful alternation between slow broodiness and total sonic chaos elevates the feel of the song, while Blackmore’s epic solo barges in at the middle, a blazing tornado of notes that just pieces itself together from nothingness.

Blackmore completely owns the spotlight on the “Highway Star” solo section, and he shares how he did it. “I wrote that out note for note about a week before we recorded it. And that is one of the only times I have ever done that. I wanted it to sound like someone driving in a fast car, for it to be one of those songs you would listen to while speeding. And I wanted a very definite Bach sound, which is why I wrote it out—and why I played those very rigid arpeggios across that very familiar Bach progression—Dm, Gm, Cmaj, Amaj. I believe that I was the first person to do that so obviously on the guitar, and I believe that that’s why it stood out and why people have enjoyed it so much,” he said.