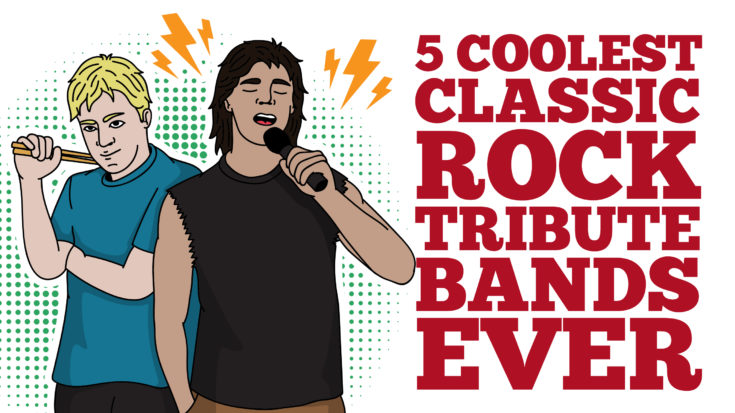 We’ll say it first so you don’t have to: they’re not the original. They’re tribute bands and they’re there to pay homage to their idols – not exactly to match them. And when our favorite acts aren’t touring, isn’t it nice to get our dose of their live music by listening to these groups?

P.S. Some even look so much like the real band!

They’re the only all-female tribute act to Iron Maiden and well, they absolutely know how to rock. The band was formed in 2001 and there have been several changes to their lineup. Bruce Dickinson has seen The Iron Maidens perform and reacted that it was “very, very weird” to see their female versions on stage. He further added: “The only difference between us and and Iron Maiden cover bands is that we do new Iron Maiden albums. Funnily enough, while that’s a joke, it’s also a good point. Without doing new albums, you just become a karaoke band of yourself. And that’s not a good enough reason for me to give up a big chunk of my life to go on tour.” The thing is, members of this group have diversified musical backgrounds (Alice Cooper’s Nita Strauss is a current member) and what they bring to the audience as a result of that is stunning performance every time.

The guys from ZoSo really tried to channel their inner Led Zeppelin by dressing like the band too. They got us – we thought their vocalist looked a lot like Robert Plant and the guitarist is the perfect Jimmy Page doppelganger. ZoSo, by the way, is Page’s symbol which you can find in their Led Zeppelin IV album. He designed it himself but he has never publicly announced what it meant. Anyway, there are plenty of great Led Zeppelin tribute bands out there but we think, ZoSo takes the cake. They recreated the music and unbelievably captured the classic feel and vibe of the group. It takes you back to those highly energetic, enthusiastic and tight performances when Led Zeppelin was at their peak. Anyway, ZoSo is already well-established given that they’ve had around 2,500 shows. And since there seems to be zero chance of getting a Led Zeppelin reunion, we don’t mind settling for this.

We’ve seen numerous covers and imitators of AC/DC. Some of them are great, others are pretty decent. But what’s hard to emulate is the raw power and energy of the band members. Come on, Angus Young is pushing 62 years old and still has the same enthusiasm he had when they started. It’s crazy, right? And the way Bon Scott and Brian Johnson fronted the group is just as hard to imitate. There’s a reason why they’re two of the greatest frontmen in rock history. And that goes without saying that whoever becomes the vocalist of tribute bands has some very big shoes to fill in. But this New York-based tribute act is surprisingly good. Just exactly how good are they? For one, their YouTube channel already has more than a million hits. Two, they’re the only cover band featured in AC/DC’s official website and Facebook page. Now that says a lot!

If you want to be entertained while getting your Van Halen fix, look no further than The Atomic Punks. Especially if you’re into the earlier Van Halen stuff – you know, the David Lee Roth era, you’ll probably like this band which was formed back in 1994. They don’t perform anything from the time Sammy Hagar fronted Van Halen so there’s that. In his 1997 autobiography ‘Crazy from the Heat,’ Roth even referred to them as “the best tribute to Van Halen ever.” Those are some pretty big words. He even hired their original guitarist Bart Walsh for some of his tours. Walsh’s replacement Brian Young was also hired during Roth’s national tour with Sammy Hagar. On his radio show, Howard Stern also sang praises for the cover act when he said that they’re “the total experience — they do Van Halen better than Van Halen themselves!” Now we are definitely sold!

With so many KISS tribute bands, it’s pretty hard keeping track of them. And besides, there are some so mediocre that their music would border on laughable. Maybe the allure is the entire image of the group – you know, looking so easily recognizable with the makeup and all. Anyway, Strutter was formed in 1988 just went the original group was in the process of transitioning. If you can still remember, this was about the time when KISS decided to leave their trademark makeup and costumes. They struggled not just with their fan base but more importantly, their identity. So anyone who wanted to go back in time, during KISS’ former style, Strutter became a good alternative. They were able to recapture the early glory days which so many fans were thirsty for. With their note-for-note covers, this is one group you can’t miss. They’re up there, among the best tribute acts ever.