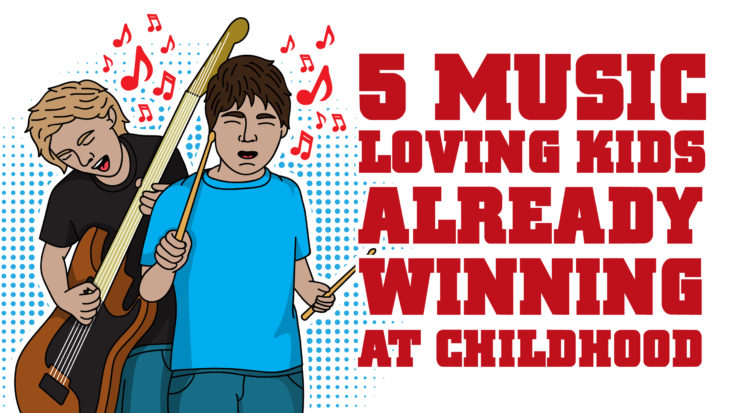 The parents of these kids deserve an award basically for sharing their passion to music. It makes you hopeful for the next generation. Another good thing here is, when their parents are older, they now have mosh pit buddies. Win-win situation, right?

Let’s admit it, one of the things that make Led Zeppelin songs legendary is the guitar riff in each track. Whether it’s the intro or the solo, Jimmy Page always made sure he added something to blow our minds whenever we listen to them. And if you’re a superfan of the band, you can easily identify their classic hits with just a few notes. Well guess what? This 3-year old can do it too! Apparently, her bonding time with her dad is by playing ‘Name That Tune.’ Her father plays a few Led Zeppelin riffs and she tries to guess them. And she does this in her pretty Elsa outfit. How cute is that? It just goes to show how great her dad is – we are so impressed. Page will be proud! Who says you need expensive toys to keep kids happy? A guitar would be fine – just take this for example.

Ah, there goes our hearts. If this doesn’t make you go, “Awwww”, then you probably have no soul. It’s not just the singing and dancing along to her dad that’s adorable – it’s also the look on her face, the very same look we all get when we know we’re listening to good music. And that smile is just priceless! It’s a real parenting win! We won’t be surprised if one day we find out she’s become a great young guitarist. Pretty soon, she’ll start asking her dad to teach her how to play the guitar and we bet she’s going to slay it. This is the coolest baby ever and undeniably the cutest Bon Jovi fan too! She’s already rockin’ in her diapers. Have you seen anyone look so happy while jamming? Boy, this is too much to handle. This is going to be an awesome singing duo in the future!

3. Pearl Jam “Elderly Woman Behind The Counter In A Small Town”

There’s only one thing we don’t like about this – it has to end. We wouldn’t mind listening to her cover the entire album. She has good taste in music, for sure but we love how she knows the words too! She probably doesn’t even understand the lyrics yet but it’s proof that this has been played often enough that she can sing to it by heart. Now if that isn’t awesome parenting, we don’t know what is. We’re fans of Pearl Jam but now, we’re fans of this little girl. We guarantee it’s the best thing you’ll see all day – definitely a burst of sunlight. It’s just hard to look at this and not smile. And the last part where she says, “More, more” is too adorable it melted our hearts. Such a real cutie!

P.S. We’d love to hear her do another take on this same song now that she’s older.

Ladies and gentlemen, we are witnessing the birth of a future rockstar. How do you know your ‘cover’ is good? It’s when it has more views than the video of the original version. Ha! Perhaps he can become The Beatles’ honorary fifth member because if we change their moniker to ‘The Fab Five’ it will still sound great, right? Now we don’t know about you but when this little boy did a little greeting before singing (like a true performer), we just lost it. Sir Paul McCartney should see this – somebody show it to him! This is just too sweet. He sure has great potential! This little one even sings better than us. When did that happen?! Lol. This makes us want to grab our own guitars and play away. This is how you know you’re raising your kids right – when they already love The Beatles at a young age. It’s a beautiful performance, kid. Keep on rockin’!

You know you’re parenting them right when your kid’s favorite song is ‘Bohemian Rhapsody.’ She’s not even three years old yet but she’s slaying this Queen masterpiece. And what else do we like about this video? She sings it with so much gusto. She’s totally feeling it and the only thing lacking is a stage, microphone and a full orchestra behind her. She’s definitely born to be a superstar and she takes singing very, very seriously. And she makes it clear that she doesn’t want anyone sharing her spotlight – no, not even dad. She screams ‘no’ when he tried to harmonize with her. Parents, just let her do her thing. You can have your moment too. Lol. Anyway, it’s like she’s in her own little world (which everyone can pretty much relate to) while belting it out. Isn’t this the best way to entertain kids while on a car ride? Just play them their favorite song and voila!