13 Classic Rock Albums Every Parent Must Introduce To Their Kids 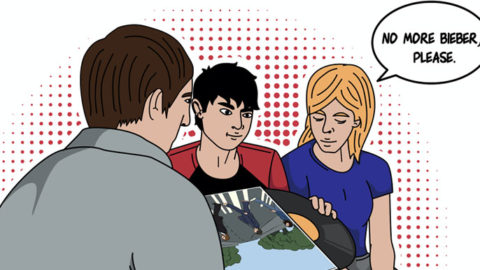 “Moving Pictures” featured songs which were shorter compared to their previous ones but they were definitely tighter in terms of structure. They were gravitating towards radio-friendly sounds so it came as no surprise that this achieved massive commercial success.

Some of their best songs are in this record like “Tom Sawyer” and “YYZ.” Who knows? Your kid might want to learn how to play the drums – after all, Neil Peart’s drumming chops are showcased in these tracks.

This is the band at their creative peak. Besides, it’s not easy to find an album where every single song is almost perfect.

This is the best that Southern Rock has to offer. The album is raw, edgy and solid – pretty impressive and is already quite an accomplishment for any band on their debut album. From “Simple Man” and “Free Bird” to “Gimme Three Steps,” it features one classic track after another.

They knew how to rock hard and they did it fairly well too. They created a unique and distinctive sound which proved just how much of a musical genius they were. “Pronounced ‘Lĕh-‘nérd ‘Skin-‘nérd” propelled them to stardom and it doesn’t take much to know why – it had their some of their most popular tunes.

While it’s still debatable whether “In Rock” or “Machine Head” is Deep Purple’s greatest album (for the most part, it’s all a matter of preference really), there’s no denying that the former captures the band’s raw sound. It had the aggressiveness and ferocity that its predecessors lacked. In many ways, this secured their spot in the rock ‘n roll pantheon.

It was a defining moment for them and another thing to love about this is that every single member of the band was on fire – it’s the lineup we didn’t know we wanted until they gave it to us. “In Rock” also had one epic track after another.

10. Jimi Hendrix – “Are You Experienced”

Like every classic rock fan, you’re probably wishing your kid knew more about Jimi Hendrix than just an iconic t-shirt print. “Are You Experienced” is the best way to introduce him to your kid. It’s one of his best records and how many can claim they truly arrived in the rock ‘n roll scene with their debut album?

Hendrix was not “another average” rocker and it showed in his guitar playing and songwriting. He was an artist through and through and more than his onstage antics, his music had a whimsical feel to it that’s more or less a peek inside his creative head.

You just can’t leave out the greatest metal album of all time. It’s like the rock gods heard our collective pleas and gave us something as heavy as this. It’s ferocious and unrelenting – when this came out, it was so dang hard to stop listening to it especially when you just want to spend the whole day feeling miserable and gloomy.

Priest frontman Rob Halford was spot on when he said that “Paranoid” created the “blueprint for metal.” So you know, if your kids like heavy metal, tell them their favorite bands owe everything to Black Sabbath – that’s not even up for debate.

You go ahead and tell them – the soundtrack in Suicide Squad is a cover and nowhere near the original. Now that we think about it, it should become a federal mandate that every single generation should listen to Queen’s epic masterpiece at least once.

This is how you break boundaries Freddie Mercury style. The songs were complex and meticulous. But somehow the whole group found a way to not take themselves too seriously.

And besides, it’s safe to say that Mercury just took songwriting to another level. And anyone who appreciates musical greatness shouldn’t skip this album – there’s a reason critics still rave about it even after all these years.

The Black Album has plenty of Metallica classics like “Enter Sandman,” “Nothing Else Matters” and “The Unforgiven.” Other fans weren’t happy with this though and accused the band as being a bunch of sellouts. You can’t really blame them, Metallica became a household name and even those who weren’t digging metal listened to this record.

But, in more ways than one, we can still consider this a masterpiece. Sure, some tracks may be overrated but its success speaks for itself. You can start off here and just work your way towards more complex albums like “…And Justice for All.” Your kid will thank you all the same.

Every single song here is a masterpiece. If another band came up with one of the tracks here, they’d still be legends. Yep, that’s how good it is. And when you look at how it was made, you can’t help but be impressed with how AC/DC bounced back after the heart-wrenching tragedy of losing their frontman Bon Scott.

Anyone who disagrees that this is one of finest musical moments of the group either has hearing problems or just has plain poor taste in music. It’s definitely the kind of record you want your kid to discover – it’s a foregone conclusion that they’ll love it.

This is what we’d choose to play for anyone who has never heard of Iron Maiden and their music. Because chances are, it will win them over. It’s a monolithic record that no one can touch. It’s astonishing to hear this, heavy and monstrous – just what every heavy metal album aspires to be. Even the underrated tracks are majestic.

“Powerslave” showcased the band at their best. It set the bar really high for everything else that followed it. If you’re looking for a bad or mediocre song here, you won’t find any. It’s tight, consistent and just hands down legendary.

Ah yes, The Beatles – if you haven’t introduced them to your kids, you better start now. One of their most commercially successful albums, “Sgt. Pepper’s Lonely Hearts Club Band” is what every other rock ‘n roll band hoped to achieve.

The telltale sign of its greatness is the fact that even five decades after its release, critics and fans still sing its praises. How many can actually accomplish that? It was creative, innovative and a massive breakthrough. Few can boast of altering the course of music and The Fab Four DID just that with this record. Even haters can’t find anything wrong with it.

Call it ZoSo, Untitled or simply IV, this is what happens when the four members of Led Zeppelin at their creative peak come together and decide to strike back at critics in the most majestic way possible. From eerie and haunting to funky and bluesy, it has everything you want and more.

It’s diverse and the perfect definition of hard rock in the ‘70s. Led Zeppelin was at the top of their game and it was clear that they were unrivaled and they will remain so in the next fifty years. The album is more than “Stairway to Heaven,” whether it’s “Black Dog” or “Rock and Roll,” it’s just hard to pick one favorite song.

You probably noticed it but we only included the best albums from these artists. And so with The Rolling Stones, we’re going for “Sticky Fingers” not just because it was a commercial and critical success but because it features numerous classic hits that we STILL can’t get enough of.

Maybe the cover artwork and some of the songs are NSFW but then again, it’s the Rolling Stones and with them, that’s pretty much a package deal. Sure, the band has other great albums which we can rave endlessly about but that doesn’t take away the credit “Sticky Fingers” richly deserve.

Okay, drum roll please. That one record you should never ever forget to tell your kids about is Pink Floyd’s tour de force – “Dark Side of the Moon.” It’s not something you listen to once and forget instantly. On the contrary, it takes several replays to fully appreciate its greatness.

Pink Floyd’s a lot of things but they weren’t ordinary. And this album is the solid proof.

It’s timeless and the songs just stop you in your tracks and make you think. Pink Floyd did not invent progressive rock but they somehow managed to perfect it. The complexity and quality of this record is truly unmatched.