12 Rockstars You Had The BIGGEST Crush On 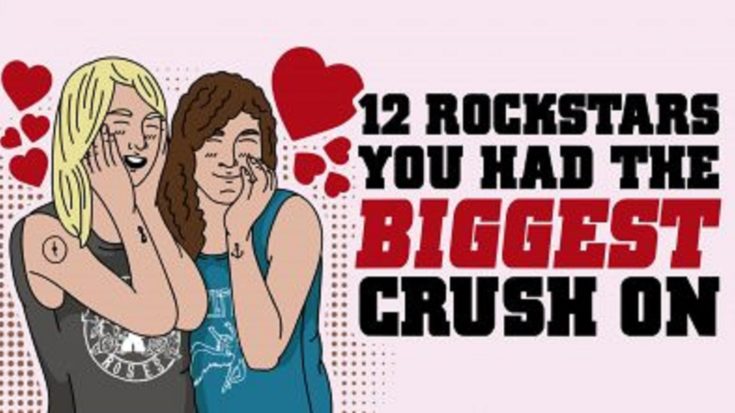 Remember back in the day when you pasted giant posters of these guys all over your bedroom wall? And you saved up your allowance so you can buy magazines or see them live whenever they’re in town? Yep, those where the good ‘ole times.

P.S. This is in no particular order. Drool to your heart’s content.

Even in his 70s, he looks dashing. Early this year, he was seen holding hands and getting cozy with his 26-year old girlfriend. Looks like he hasn’t run out of charm! He was notorious for bringing limos of young groupies in his early days. The thing is, he is a rock god. And admit it, there’s nothing sexier than a good-looking man yielding a double neck guitar and shredding it like there’s no tomorrow. He talks so slowly and sweetly but when he plays, he plays it loud! There are so many things we can gush about him but most of all, it’s probably the combination of lethal good looks and talent. Imagine how all those girls near the edge of the stage felt when they could get a glimpse of the guitar god at work. And perhaps his gorgeous eyes is one big bonus. Yes, you can start daydreaming now.

At the peak of his career, Axl Rose was unstoppable. But popularity has its downsides. He had a reputation of being a bad boy and a bit of a diva. If you attended any Guns ‘n Roses concerts in the late ‘80s or early ‘90s, you probably experienced first-hand Axl’s lack of punctuality. You know, he once made fans wait for three hours before the show started. He also had various fits during their gigs. Nevertheless, with that voice, strong stage presence and of course, his undeniably handsome face (with good hair to boot), girls went gaga over him. Ladies love bad boys but one who also happens to be a rockstar? Totally dreamy. He likes partying with models and now that he’s back to hitting the road with both Guns ‘n Roses and AC/DC, we won’t be surprised if he has females going crazy for him all over again.

If you didn’t find Paul McCartney sexy and ultra hot in his Beatles days, then there’s something wrong with you. LOL. If you watch his old interviews, he is so adorable and funny. Now it’s no wonder screaming girls are following him everywhere – he writes iconic songs, has a great voice, is a multi-instrumentalist and seems like a really cool guy too. He also sounds so soothing when he talks – like he’s someone you can chat with for hours and not get bored. And you’d be lying if you say you’ve never dreamed of staring at that attractive, baby face of his all day long. We probably fell in love with him more when he shared how he wooed Linda: “As she was leaving… I saw an obvious opportunity. I said: ‘My name’s Paul. What’s yours?” Uh, yes Paul. His pick-up line can be as simple and corny as that but dang, it will always work. He’s Paul McCartney after all.

If he isn’t one of the sexiest beasts to ever walk this earth! Steven Tyler might seem like a cool grandma today but in his glory days, he was just stunning. With that badass voice and trademark scream, he can bring the house down with his performance and it’s safe to say, women fell head over heels in love with him. You’re probably one of them too. See, who can resist the charms of this insanely talented Aerosmith frontman? He can’t just belt out high-pitched songs but he can play the drums and harmonica too. Seriously, what can he not do? He’s crazy, funny, goofy and wildly unpredictable. And he knows how to have fun. What else could you want? Plus he’s in an iconic rock group so really, he’s the total package. And did you see him with his daughters? He’s a doting and loving father. Okay, calm your heart and ovaries now.

Is there really any need for explanation why you were once in love with him? Dude, Jon Bon Jovi is the epitome of sexy rockstar. He made it to People magazine’s list of “50 Most Beautiful People In The World” and ranked at no. 13 on VH1’s “100 Sexiest Artists.” The only reason we disagree is that he should be at the top spot. Have you seen his photos when he still had those luscious, curly locks and he was donned in an all-leather ensemble? The sight is enough to make girls swoon. And to top it off, he has a golden heart. If you’ve heard of the JBJ Soul Kitchen which allows you to just pay whatever you can for good food, you know he’s more than a pretty face. The concept is just so good, it makes you tear up. Well, we wish we had more people like him!

Cue internal girlish scream. Robert Plant was every female’s dream guy. It only takes one look at him to know he is nothing but perfect. He’s so gorgeous he will make you grateful for the gift of sight. Aside from his highly addicting music, the guy’s also intelligent and very articulate. Need proof? Just watch his old interviews back in the ‘70s. He was truly something else. Of course, he’s a different man on stage. Being one of the greatest frontmen in classic rock history, he delivers every single time. And let’s not forget the belting out of high notes and his hip swinging. If you have never seen him live, you just missed half of your life. If we met him in 1975, we would have passed out immediately. How can anyone look so stunning and be so incredibly talented? Whoever doesn’t find him attractive, we need to talk to you. LOL.

Mick Jagger has had so many girlfriends that there are several articles solely dedicated to the women in his life. In fact, according to biographer Chris Andersen, Mick allegedly slept with more than 4,000 ladies – some of them repeatedly. If that doesn’t say a lot about his sexual prowess, we have no idea what does. Andersen also said that Mick sought help from a sex therapist but ended up seducing her instead. So maybe Mick really got no satisfaction? 😛 Some of his well-known conquests include model Jerry Hall (whom he married in Bali), a brief fling with actress Uma Thurman and rumor has it he also pursued Angelina Jolie (still unknown back then). Yes, he’s a real ladies’ man. What is it about Mick that women find irresistible? Is it his incredible musicality, high energy or enthusiasm? Or maybe there’s a certain appeal because of Mick’s reputation as a serial heartbreaker?

David Bowie is probably partly responsible for women’s sexual awakening in the ‘60s, ‘70s, ‘80s and even the ‘90s (take note of the glorious handsome man named Jareth a.k.a. King of Goblins in Labyrinth). He’s maybe every girl’s first crush. He’s incomparable and we don’t even know where to begin. Sure, we can cite plenty of instances where he’s a true gift to humanity but seriously, just watch Labyrinth. If after seeing it, you still ask why Bowie’s on this list, you need to start reevaluating your life choices. Ha! He’s simply otherworldly and no one (we repeat, NO ONE) can hold a candle to him. The world will never know another Bowie and that really breaks our hearts. So, BRB. We’ll stay at home, cuddle with pillows and put Labyrinth on repeat with a few live performances in between probably. We live for his ethereal beauty and great voice.

Jim Morrison is your typical bad boy rockstar. Yep, we have plenty of them here. Jim is undeniably one great frontman. He always put on a show. Sometimes it can be too much though. (Remember that time when he allegedly exposed himself to the crowd because he was so drunk?) He also had some crazy drunken antics. Case in point, when Janis Joplin found him so annoying that she smashed a bottle of Southern Comfort on his head. Apparently, that only turned him on. But Jim was so terrifyingly unpredictable and charismatic at the same time that he easily shines on and off stage. Everyone wanted to party with him and he had a certain appeal that made people want to gravitate towards him, girls included. And his poetry – yes please! How many guys are this good with words? It will speak to you on a spiritual level and just touch your heart.

We know all too well the love-hate and relationship drama between Stevie Nicks and Lindsey Buckingham. There were some spiteful words, he said/she said moments, bickering, insults and so many painful statements better sung than said. Lindsey was clearly a sentimental type of guy and if anything, it proves how much he loved Stevie (Uhm, hello. They’re high school sweethearts). And let’s face it, at one point they were the perfect couple. Take note, when Mick Fleetwood invited him to join the band, he wouldn’t say yes unless Stevie would be there. Yes, they were a package deal. Also, we’d like to remind you of the time Lindsey and Stevie looked at each other on stage and we swear there was something going on. Ladies and gentlemen, this is the part where we say a collective “Awwwww.” Besides, we already know he’s a talented songwriter but dang, he’s also one underrated guitarist with his furious bluegrass-style finger-picking. How can you not love him?

This guy needs no introduction. Every female we know was once in love with him, had photos of him on their vanity mirrors, and sang along to his classic hits. And if singing high-pitched notes flawlessly isn’t enough, the man oozes so much sex appeal. In fact, we bet some of you still have a crush on him. He’s blessed with a set of golden pipes and how can anyone ever resist that? Imagine him trying to woo you with a serenade? He’s so talented he can sing the yellow pages and we’d faint dead away. You can pick any of his songs, crank it up and drown yourself in his highly addicting vocals. It’s almost like he’s not from this world. Legend has it that when you play ‘Faithfully’ in the middle of the night, Steve Perry will come knocking on your door. Lol, just kidding. We just made that one up.

There was always something enigmatic about Jimi Hendrix. Despite his popularity, he was a very humble guy. You know, when he admitted that he cannot read music and Dick Cavette told him “You’re considered one of the best guitar players in the world.” and Jimi replied, “Aw, no.” If that doesn’t hit you right in the feels, you must have a really cold heart or none at all. He was shy and a bit bashful at times but when he hits the stage, he easily transforms into the guitar god that he is – even performing insane guitar theatrics like playing the strings with his teeth or setting his axe on fire in front of the crowd. But how smooth is he with the ladies? Former girlfriend Kathy Etchingham recalled one of the first things Jimi told her on the day they met was, “I think you’re beautiful.” Now, who in their right mind would not be swayed by that?