10 Things You Didn’t Know About Slash – Whoa, You Might Be Surprised At Some of These! 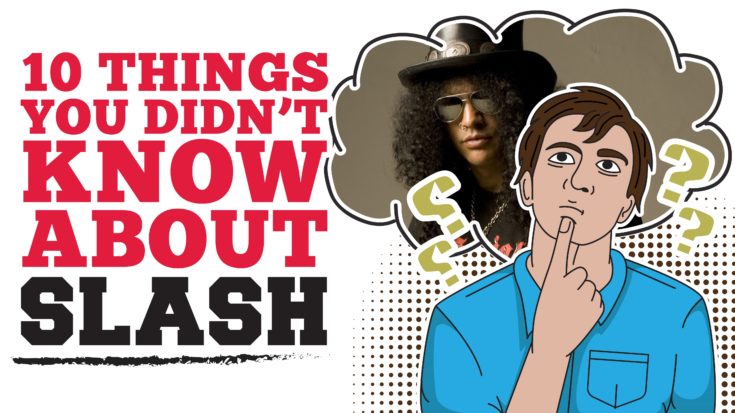 You Wouldn’t Believe Some Of Them

We can never imagine going to a Guns ‘n Roses concert without the sight of Slash with his top hat while shredding through his guitar. So in honor of this iconic musician, here are some lesser-known facts you may not know about Slash :

In one interview, Slash shared: “I’m also a non-smoker. But I’m addicted to coffee (the stronger the better — Cuban is my favorite).” Remember those images where he rips through his axe while smoking a cigarette? Before he stopped smoking in 2009, he would go for 3 or even 4 packs a day. Being a rock star and all, he opted for the French premium cigarettes ‘Gitanes.’ Well, those days are gone. You know what (or rather who) helped him quit? It’s Cher. In one of her concerts in Las Vegas, Slash went outside several times for cigarette breaks and the next day, he had pneumonia. He said, “So, I was in bed for a couple of weeks and I couldn’t breathe, let alone smoke. And at the end of the two weeks, I had the … Gitanes on the nightstand and the lighter and I was all excited to get my first smoke in and I thought, ‘Oh man, if I was thinking about quitting smoking … I’m over the hump.’ So I haven’t smoked since.” And he also added, “You get to a point where, with anything excessive … you’re doing it and you don’t even like it anymore.”

He had his moments back in the day – alcoholism and heroin, mostly. Those years of abuse led to a condition called cardiomyopathy which affects the heart muscles. In fact, the doctor said he had a few weeks to live. But at the age of 35, he was fitted with a defibrillator and also started sobering up. He recalled, “Years of drinking had swollen my heart to the point of bursting. It reached the point where the doctors gave me between six days and six weeks to live. They installed a defibrillator to keep my heart from stopping and keep it beating at a steady rate. After the operation I began therapy and miraculously my heart started to heal.” His first gig since the surgery was for Michael Jackson’s 40th Birthday Concert in Madison Square Garden. Although it didn’t look obvious to the audience, Slash actually had a few episodes of heart scare. Now, he has this advice to everyone: “Don’t do drugs and alcohol — I’m living proof!”

Aside from good music, another thing Slash wants to give is nightmares. He’s a very busy guy. If he’s not ripping through his guitar or performing in front of hundreds or thousands of fans, he’s running his own horror film production company. Appropriately called ‘Slasher Films’, he made his debut as a producer back in 2013 with the film “Nothing Left To Fear” and he also produced “The Hell Within.” In an interview with Rolling Stone, he said: “Everything about doing this is exciting to me, a lot because I’ve had a passion for movies, and especially horror movies, for as long as I can remember. So at this stage of the game, to have the opportunity to be able to produce horror movies is great, and to be hands-on behind the scenes and getting to finally be involved where you can influence the outcome of what the picture is gonna be and what it’s gonna look like is very exciting.” Is it really surprising that Slash loves anything scary and creepy?

4. Aerosmith’s “Rocks” was a huge inspiration to him.

We all know Aerosmith’s “Rocks” album was a favorite of Nirvana’s Kurt Cobain and it has been cited by several times in the autobiography written by Mötley Crüe’s Nikki Sixx. But what you may not know is that Metallica’s James Hetfield and Slash point to this as the main influence that propelled them to learn how to play the guitar. Slash told Guitar World: “I’d been into records by Black Sabbath, Zeppelin and Deep Purple, but Rocks sounded like the Rolling Stones, who had been my favorite band from age 3 to 13. It had the blues-based rock and roll thing, but turned up to 15. Aerosmith delivered the songs with such urgency, and the music had an almost punk attitude, with its powerhouse rhythm section and guitars that were all over the place. Rocks was loose and frenzied, and I could relate to the emotional angst-filled vocals of “Last Child” and “Combination.” It wasn’t pristine and perfect, but it gelled together perfectly. It’s an amazing record.” Imagine how fun and memorable it was when he toured with Aerosmith not just once but twice! Talk about sharing the spotlight with your idols.

5. He shoplifted his famous top hat.

Trademarks separate THE real rockstars from the rest. And if there’s anything more popular than Slash, it would be his signature top hat. There was no ‘AHA’ moment that started this whole fashion sensation. In fact, you probably wouldn’t believe how he got his distinct ‘style’ so to speak. He stole it. He shared this bit of information to the Huffington Post, “I always had a thing for hats; it really completes a look. Around 1985, early in Guns n’ Roses career before we had a record deal, I was down on Melrose looking for something cool to wear to a gig that night at The Whiskey. I didn’t have any money so that meant basically [it had to be] something I could steal. So I went to a store called Retail Slut and I saw this top hat and it just spoke to me. And, you know, once you decide that you actually like something, there’s no turning back: you just have to get it.” Before that, he also took a Concho belt from another store. So after looking at the top hat, he decided to put the belt around it. Pretty clever, huh?

Oh, Slash. On July 14, 2007 at the Las Vegas’ Hard Rock Hotel and Casino, they held a dedication ceremony that celebrates his career in music with Guns ‘n Roses and Velvet Revolver. However, the hosts and event officials got an unexpected surprise. He returned a Les Paul guitar that he took from their Florida café. He said, “The guitar has the best story. I stole that from the Hard Rock in Orlando (in Florida). It was in the dressing room. I didn’t know what it was doing there, so I took it. I mean, it was in the dressing room and no one claimed it. So I’ve had it all these years and been playing it. But then I thought what better way to honor the Hard Rock for honoring me than to give it back, sort of.” Well at lest he came clean and did the right thing.

7. He sometimes considers cutting off his hair.

Slash without his long, curly hair? That’s like Steven Tyler sporting a Mohawk or Paul McCartney shaving his head. Of course you can’t expect Slash not to have bad hair days, right? Even certified rock stars get them – that’s basically one of the reasons he has his top hat, you know to cover up when he needs to. You can just imagine all the maintenance that goes into keeping them shiny and bouncy. So it’s no wonder he keeps on thinking of chopping off his locks. He claimed, “In the summertime every year, it gets so hot that you just start thinking, ‘I just want to cut it.’ But, then it just never happens. I couldn’t imagine walking around with really short hair. It would feel weird.” Yes, Slash. We probably wouldn’t even recognize you. And it’s gonna take a long time to grow it back. So please, just keep it that way.

8. A famous actor came up with his moniker.

You know his real name is Saul Hudson. But how did he get the nickname Slash? It’s fairly appropriate, by the way because he’s practically ripping through his guitar each time he plays. If you can remember American actor Seymour Cassel who once received an Academy Award nomination for Best Supporting Actor, his son was friends with Slash who was a mischievous teen back then. Slash told Metal Hammer, “My best friend’s dad is an actor named Seymour Cassel, and we used to ditch school and hang out at his house and he used to call me Slash and it was just habitual with him. I was on tour in Europe and I happened to run into him and we went to dinner. He told me that he called me Slash, cause I had to ask him, and he says it was always because I was in a hurry, hustling whatever it was I was hustling at the time and never had time to sit and chat. I was always sort of in passing and he just started calling me Slash.” Now that’s quite a story, don’t you think?

9. He has a soft spot for elephants.

It’s always great to see celebrities using their fame for wonderful causes and advocacy. He’s been very vocal about his stand on illegal poaching and the ivory trade. He and his singer Myles Kennedy went to South Africa for some shows and they got the chance to tour around and see the wildlife. When he saw how dire the situation was, he made it a point to create more awareness. Kennedy wrote the song ‘Beneath The Savage Sun’ and it was accompanied by a powerful music video. Slash adds, “We wanted to give the viewer an idea of the atrocities that are going on, to hit them full in the face with it. It’s more of an immersive experience. The most important thing is to reach as many people as possible. Elephants are so beautiful, intelligent and sensitive.” Slash is on the board of the Los Angeles Zoo and he also took part in Billy the Elephant campaign.

10. He geeks out about dinosaurs.

Who doesn’t like dinosaurs? Slash is so fascinated by them he can actually tell you difference between those creatures whose names we can’t even pronounce. A few years ago, he had a garage sale and sold some of his collectibles (which he has invested somewhere close to millions of dollars, by the way) so he can make space for more – from figures to paintings and dinosaur eggs, he probably has it all. When he sat down with Reptiles Magazine, he said: “I started with the whole reptile, dinosaur and monster fascination as far back as I can remember. When I was young and lived in London, I think that one of the biggest thrills that I had was going to Crystal Palace. Crystal Palace is a big park, and it had huge, life-size sculptures of dinosaurs. The figures they had, though, were completely anatomically incorrect. I kept going there and looking at the sculptures and was very much into that.” So that’s what his childhood was like! He even recommends dinosaur museums like the Royal Tyrrell Museum in Alberta. We wouldn’t mind a tour with Slash there.