10 Songs That Are Now More Than 50 Years Old 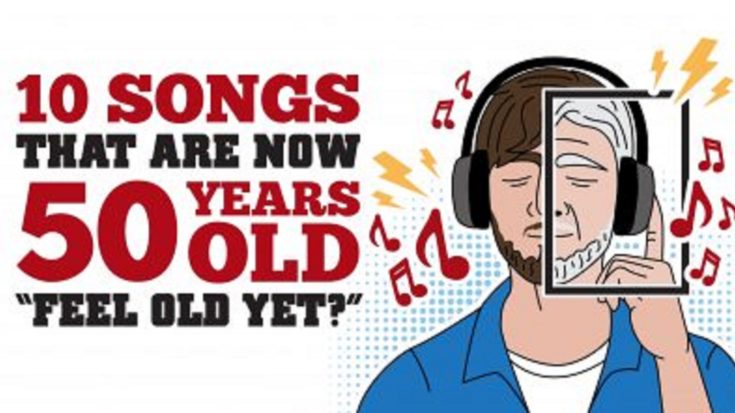 Would you believe it’s been more than half a century since these songs were released? Wow, time does fly. This makes us feel uncomfortably old. Do you still remember the first time you heard them on the radio? Ah, yes. The nostalgia is strong here. So let’s take a quick trip down memory lane now, shall we?

P.S. The Beatles, Beach Boys, The Who and Rolling Stones dominated the charts so we decided to just pick one of their 50-year old hits.

In 1963, The Beatles released what would be their best-selling single of all time. It was the song that propelled The Fab Four into the British national spotlight. The allure is perhaps in the song’s hook. Like, when you hear the part where the boys sing ‘yeah, yeah, yeah’ you’ll likely end up singing along to them. It even became their ‘signature phrase’ so to speak. In fact, there were certain parts in Europe where people called them The Yeah-Yeahs. It’s crazy how much success one track became. But how did it all began? Paul McCartney once shared, “as often happens, you think of one song when you write another … I’d planned an ‘answering song’ where a couple of us would sing ‘she loves you’ and the other ones would answer ‘yeah yeah’. We decided that was a crummy idea but at least we then had the idea of a song called ‘She Loves You’. So we sat in the hotel bedroom for a few hours and wrote it—John and I, sitting on twin beds with guitars.” The next day, they finished writing it.

First things first, let’s take some time to congratulate this legendary artist for his well-deserved Nobel Prize in Literature. So anyway, this song had us believing that ‘magic’ is real after all. On April 1962, then-20-year old Bob Dylan performed ‘Blowin’ At The Wind’ at his very first public gig and at the time, the track was still unfinished. Aside from being the most popular protest song ever written (since it poses a number of rhetorical questions), it was also among his most important compositions. When asked about how he wrote it, he said: “I wrote ‘Blowin’ in the Wind’ in 10 minutes, just put words to an old spiritual, probably something I learned from Carter Family records. That’s the folk tradition. You use what’s been handed down.” This is raw artistry – something we don’t get to see very often. We’re probably not the only ones who start crying when this song plays, right?

Peaked at the second spot in Billboard’s list of songs in 1963, ‘Surfin’ USA’ was written by Chuck Berry. Aside from being part of the list for “The Rock and Roll Hall of Fame’s 500 Songs that Shaped Rock and Roll”, it is also characteristic of California sound. It’s a feel-good song that’s full of enthusiasm and fun. According to Brian Wilson who penned the lyrics, “I was going with a girl called Judy Bowles, and her brother Jimmy was a surfer. He knew all the surfing spots. I started humming the melody to ‘Sweet Little Sixteen’ and I got fascinated with the fact of doing it, and I thought to myself, ‘God! What about trying to put surf lyrics to Sweet Little Sixteen’s melody? The concept was about, ‘They are doing this in this city, and they’re doing that in that city’ So I said to Jimmy, ‘Hey Jimmy, I want to do a song mentioning all the surf spots.’ So he gave me a list.” Does anyone miss summer yet?

4. Rolling Stones- “(I Can’t Get No) Satisfaction”

It was the band’s first No. 1 single in the US and it landed the second spot in the Rolling Stone magazine’s list of “The 500 Greatest Songs of All Time.” The famous three-note guitar riff actually came to Keith Richards in a dream while he was sleeping in his motel room. He said, “I woke up in the middle of the night. There was a cassette recorder next to the bed and an acoustic guitar. The next morning when I woke up, the tape had gone all the way to the end. So I ran it back, and there’s like 30 seconds of this riff — ‘Da-da da-da-da, I can’t get no satisfaction’ — and the rest of the tape is me snoring!” The following day, Mick Jagger wrote the words in only 10 minutes while he was lounging by the pool. Five decades later, people are still crazy over the song. Other artists can try to emulate the energy the Rolling Stones has, but the original version will remain unmatched.

In 1965, The Who released their most recognizable song – ‘My Generation.’ Although many say it’s all about teenage angst, it wasn’t exactly written by Pete Townshend to serve as an anthem for youth mutiny. It features unforgettable lyrics of rebellion and in fact, one of the most quoted words in rock music history is “I hope I die before I get old.” There’s palpable anger and frustration as Roger Daltrey’s delivery – his stuttering and howling vocal performance. In an interview with the Rolling Stone magazine back in 1987, Townshend said: “’My Generation’ was very much about trying to find a place in society. I was very, very lost. The band was young then. It was believed that its career would be incredibly brief.” And of course, during their legendary Woodstock performance, Townshend had to bash his guitar. That will always be one of the craziest and most iconic moments of the entire festival.

Aren’t you glad to have experienced the British Invasion in the ‘60s? Rivaling The Beatles in popularity was the English pop rock group, The Dave Clark Five. After knocking off The Fab Four’s “I Want To Hold Your Hand” with their hit single “Glad All Over”, they also appeared in The Ed Sullivan Show just two weeks after The Beatles. In 1965, DC5 released on of their top classics – ‘Catch Me If You Can.’ It’s such a catchy tune with an insanely fun hook – the guitar and finger snapping accompaniment. Plus, it probably has one of the best beats and drums from this era. It’s a truly beautiful stuff and it brings great memories of your youth. Can you remember having your Last Song Syndrome to this? How you can’t seem to stop singing along? This song will always put you in a good mood. And that sound is just amazing.

Here is yet another band from the British Invasion – The Yardbirds. This is the rock group that helped launched the legendary career of some of the prominent names in the music industry – Jeff Beck, Eric Clapton and Led Zeppelin’s Jimmy Page. The release of ‘For Your Love’ in 1965 became a turning point for them. Why? For one, it became the start of their pursuit for commercial pop rock sound instead of their blues roots. And another thing, it was what prompted Clapton to leave. Although to be fair, that wasn’t the only reason for his departure. So anyway, there’s always something addicting about the bongos. It somewhat gave the song a bit more distinctive flavor. The raw sound is amazing and refreshing considering that not every band back in the day played live on TV. Don’t be surprised if this song will get stuck in your head all day – that’s what just happened to us!

8. The Monkees – “Last Train To Clarksville”

It’s probably the chiming guitar riff and Beatles-like vocal harmonies that gave it so much appeal because a lot of people thought this was a Beatles track from the first time they heard it. Are you guilty of that too? In fact, it’s often compared to the Fab Four’s 1966 hit ‘Paperback Writer.’ The song is about a man calling his girl so he can meet her at the train station in Clarksville prior to his departure. The Vietnam War was going on at the time and there were some rumors that the guy’s a soldier about to leave for the war zone. Songwriter Bobby Hart denied it, however. He said, “We were just looking for a name that sounded good. There’s a little town in northern Arizona I used to go through in the summer on the way to Oak Creek Canyon called Clarksdale. We were throwing out names, and when we got to Clarksdale, we thought Clarksville sounded even better. We didn’t know it at the time, [but] there is an Army base near the town of Clarksville, Tennessee — which would have fit the bill fine for the story line. We couldn’t be too direct with The Monkees. We couldn’t really make a protest song out of it — we kind of snuck it in.”

Originally recorded by Paul Simon alone in 1965, the folk rock duo then re-recorded it later that year and included in their Sounds of Silence album. The song is all about emotional detachment and isolation as evidenced by the lines: “I’ve built walls / A fortress, steep and mighty / That none may penetrate.” Although the initial release didn’t enjoy a commercial success, the Simon and Garfunkel version peaked at number 3 on the Billboard Hot 100 chart. The message is powerful and profound – it will easily hit you right in the feels. The initial official recording only became available in the US in 1981 because according to the liner notes, Paul Simon said: “This L.P. contains twelve of the songs that I have written over the past two years. There are some here that I would not write today. I don’t believe in them as I once did. I have included them because they played an important role in the transition. It is discomforting, almost painful, to look back over something someone else created and realize that someone else was you. I am not ashamed of where I’ve been and what I’ve thought. It’s just not me anymore. It is perfectly clear to me that the songs I write today will not be mine tomorrow. I don’t regret the loss.”

More than 50 years ago, folk rock group The Mamas and The Papas released their only number-one hit on the U.S. Billboard Hot 100 chart. John Phillipes, who wrote the song, finished it in only 20 minutes. It’s so cool and fun! Don’t you wish we could go back to the time when we had this kind of music? This track just brings so many good memories – one of the best harmonies ever too! Suddenly, Mondays don’t seem so bad now. The female vocal performance is hands-down perfect – it’s effortless, raw and pure. Mama Cass slayed it! And you can tell she’s enjoying it way too much – her energy and enthusiasm are so contagious. If only we can be just as pumped up as her for Monday! We’re gonna have to listen to this whenever we get the blues (or just need to survive) on the first day of the week. Lol!