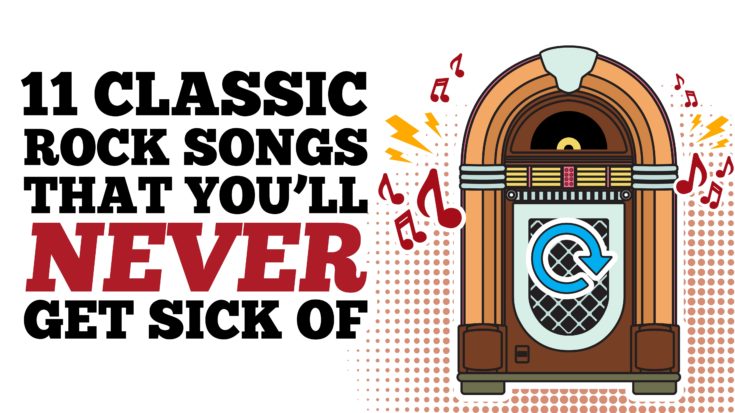 Get Ready For Some Nostalgia

Some may call them overrated but these are staples in classic rock radio stations. They were huge hits when they were released so we won’t be surprised if at one time, you heard them every single day.

It’s a bit bittersweet that this anti-war anthem is still as relevant today as when it was released more than 45 years ago during the time when Vietnam War was ongoing. There are those who don’t necessarily like the message of the song, politics and all directed at the elite classes, but you can’t deny how good it sounds. John Fogerty shared the origin and inspiration of the song in The Voice, “The thoughts behind this song – it was a lot of anger. So it was the Vietnam War going on… Now I was drafted and they’re making me fight, and no one has actually defined why. So this was all boiling inside of me and I sat down on the edge of my bed and out came “It ain’t me, it ain’t me, I ain’t no senator’s son!” You know, it took about 20 minutes to write the song.”

You know what’s great about this song? It gets you through rough days. We love listening to Steve Perry and the tone and vibe are so uplifting, it really inspires you. Somehow, the track makes us feel young again – it will take you back to good times. How many can do that? But it’s not just about its catchy riff and amazing chorus – there’s a pretty profound meaning when you focus on the lyrics. And Steve’s incredible voice is such a great bonus. Until this day, no one can match his talent. It’s like the man was given to us so humanity could appreciate music more. There’s just something magical whenever he sings this live – some spell he has cast on us. When it plays, it’s basically compelling you to sing along. We all know the words by heart and it feels like a mortal sin not to belt out the high notes. LOL.

Ladies and gentlemen, this is how a rock band should be. Everything just comes together – Keith Moon playing like crazy is probably one of the highlights. He practically stole the show! He’s a legend and visually, he looks so cool. His machine gun drumming is a thing of wonder. You just can’t help but stare in awe. He’s an absolute beast behind the kit. It’s so epic he deserves a camera all to himself. Watching this guy play is never boring – it gets you pumped up. But wait, John Entwistle’s isolated bass is also something else. He was clearly a musical genius and listening to that tone is pure heaven – it’s an unmistakable sound. It proves that it doesn’t need to be complex to sound good. You can listen to him play very simple lines and it will still blow you away. All in all, this is definitely one of The Who’s finest works.

This song is so relaxing and soothing that it reminds you of long drives on the countryside. Today’s music can’t hold a candle to these legends. It takes you back to simpler times, doesn’t it? The whole feel of the song is just something else. It fills you with so many awesome memories. If anyone doesn’t love this track, there’s probably something wrong with you. If you don’t think this is great, you may need to look back on your life choices and reassess everything. LOL. There’s a lot of feel-good magic here and the only way you cannot appreciate this song is if you’re tone deaf. It doesn’t even matter where you’re from, falling in love with this music is so easy it makes you feel like living in Alabama too. From the moment we heard this on the radio, we instantly became fans. BRB as we put this on repeat.

Aren’t you mighty glad you lived at a time when awesome songs like this exist? It’s soulful and hauntingly beautiful – from the mesmerizing vocals to the lyrics and of course, David Gilmour’s epic solos. It’s one of the best you’ll ever hear – the pacing is hands-down perfect and the feeling and tone are both exceptional as well. There’s so much soul and power. It’s clearly the work of a musical genius – listening to it is almost like a religious experience. It will never fail to send chills down your spine. Ah yes, the mark of good music. A few seconds into it and it already feels like you’re being taken to a different dimension where it’s just you and the song. It really gets to you as if you’re floating on a sea of indescribable emotions. It’s undeniably one of the greatest songs in rock history – easily among the best.

If you say you haven’t listened to this, you’re lying. This masterpiece is everywhere – from movie soundtracks to viral sing-along videos. You can’t escape Freddie Mercury’s spellbinding music. If this proves anything, it’s that rock music follows no rules. It makes you think what kind of musical genius can make something like it work so well together. Well, it’s Freddie Mercury people. His musicality is off-the-charts. He always liked to experiment with things and ‘Bohemian Rhapsody’ was certainly something that has never been done before. He pushed the boundaries and it paid off big time! We can’t praise this song enough – it’s just perfect. The sheer complexity is enough to conclude that Freddie Mercury is a rock god. It’s almost otherworldly on so many levels. You can never go wrong with this song. Freddie’s phenomenal vocals is unrivaled and dare we say, this is his finest vocal performance of all time.

Cool rhythm and great solo – there’s nothing better than that. There’s something mysterious about it too. Remember when people tried to decipher the real meaning behind it? And some even claimed it was about the devil. But The Eagles made it clear that it was just an “interpretation of the high life in Los Angeles.” But the song reminds you of warm summer days – chillin’ at the beach with a drink in one hand while watching the sunset. You can close your eyes and just let the music sink in. Listening to it for the nth time still gives us goosebumps. The story in the lyrics is so poetic and one that stands out is the line “You can check out any time you like but you can never leave!” How can one song be so perfect? Other musicians may have covered this but nothing will ever beat the original.

The hard truth is not all bands sound so good live but Aerosmith has proven throughout the decades that they’re one of the few that are way better in concerts compared to studio versions. And anyway, it’s the kind of song that you can listen to over and over but still find something different to enjoy in it every single time. It speaks to you on so many volumes and well, we can definitely call it a titan of a track. It’s practically immortal just like Steven Tyler and Joe Perry. Allow us to say that this particular performance trumps their ‘80s or ‘90s selves. Man, they’re like fine wine – just getting better with age. How many can claim anything like that? You know that phrase ‘never gets old’? Aerosmith lived up to it. They definitely exceeded our expectations. You can’t call yourself a fan of classic rock without loving ‘Sweet Emotion.’

Warning: this song is hypnotizing and may take you to wonderland. Pretty much like Aerosmith, Rolling Stones is a piece of rock music history. It’s an intense and very powerful song – summarizing all the emotional rollercoaster and wreckage the world was going through at the time. Mick Jagger even shared to Rolling Stone during one interview, “Well, it’s a very rough, very violent era. The Vietnam War. Violence on the screens, pillage and burning. And Vietnam was not war as we knew it in the conventional sense. The thing about Vietnam was that it wasn’t like World War II, and it wasn’t like Korea, and it wasn’t like the Gulf War. It was a real nasty war, and people didn’t like it. People objected, and people didn’t want to fight it… That’s a kind of end-of-the-world song, really. It’s apocalypse; the whole record’s like that.” And how did it end up? It became one of the greatest songs of all time.

We pity the person who has never listened to The Beatles especially their classic hit “Hey Jude.” It’s definitely one of their best works and beautiful in so many ways. Sometimes it makes you wonder just how talented The Fab Four is as a group and individually. They probably have more musicality than the rest of the world. It’s even hard to pick one great song because it seems that every single track they released is a masterpiece. But this specific song is something special. Aside from being the band’s biggest single in the US (it also sold around 8 million copies worldwide and was even certified platinum 4x by the RIAA), it carried a warm and hopeful message. According to Paul McCartney, the opening lines were intended to be “a hopeful message for Julian: ‘Come on, man, your parents got divorced. I know you’re not happy, but you’ll be OK.”

Once you hear Led Zeppelin, your life will never be the same. Their music is so enchanting – like you can listen for hours and it still won’t be enough. And this live version is the best one you’ll ever hear – we guarantee that. While working on the song, it was so tough for Jimmy Page because he thought: “The riff was so good that you had to make sure whatever you did as the first change really holds up.” And boy, they were definitely up for the challenge. And he certainly had big visions for the track. He also added in one interview, “Those songs – In My Time of Dying, Kashmir – are supposed to be: That’s it. Nothing follows that. You need time to catch your breath after.” When they recorded it with an orchestra, that only made everything perfect. There’s no way you haven’t heard this song before. That would be like missing the holidays – absolutely impossible.