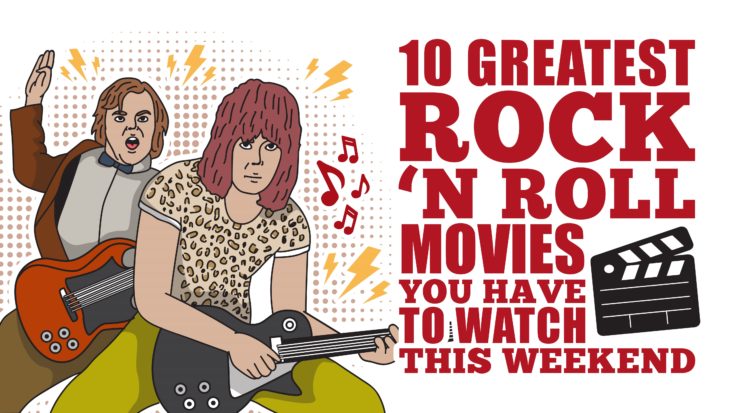 If there’s such thing as the perfect time to crank up the volume and soundproof your home theater, it would be now. Whether you were in lining up at the cinema when these films came out or you recently learned about their existence, we guarantee that watching them will be fun.

Here’s our list of flicks in no particular order:

Summary: It follows the story of ‘Pink’, a troubled and confused rock star on his way to a slow descent into madness. From his father’s death to the punishment he received in school and several other depressing moments – he began to create a wall around himself, isolating him from the rest of the world. When this type of coping mechanism to shelter and confine himself from any emotional situation started to backfire, he then sought for a way to break free.

Similar to Pink Floyd’s album where this film was based on, it’s full of metaphors, symbolism and imagery. There’s not much dialogue but plenty of addicting music.

Reception: It was a commercial success and received generally positive reviews. According to film critic Roger Ebert, the movie was “a stunning vision of self-destruction.” He also wrote, “The music is strong and true, the images are like sledge hammers, and for once, the rock and roll hero isn’t just a spoiled narcissist, but a real, suffering image of all the despair of this nuclear age. This is a real good movie.”

Summary: This coming-of-age drama film follows the story of the 1970s all-female rock group, The Runaways, and the relationship between lead vocalist Cherie Currie and co-member Joan Jett – it starts off with the formation of the band until Currie’s departure. Both Currie and Jett have lifelong dreams of becoming rock stars. Jett pitches the idea of starting an all-punk rock act to record producer and manager Kim Fowley. He then paired her to a drummer, Sandy West. They began looking for a hot blonde member in various Los Angeles clubs and eventually found Currie.
The movie also explores Currie’s struggle with drugs and her mental breakdown while recording.

Reception: The original Cherie Currie was more than happy with Dakota Fanning’s portrayal of her character. Although it under-performed in the box office (only grossed $4,681,651), critics have given it generally positive reviews. Variety’s Dennis Harvey wrote, “proves [to be a] conventionally enjoyable making-and-breaking-of-the-band saga.”

Summary: The movie depicts the fictional tale of William Miller, a 15-year old young journalist and child prodigy writing for the Rolling Stone magazine. He’s tasked to follow an up-and-coming fictitious rock band, Stillwater. This is somewhat semi-autobiographical since the director, Crowe, was once a teenage writer for the said magazine and the film is loosely based on his time touring with various acts like The Allman Brothers Band, Lynyrd Skynyrd, The Eagles and Led Zeppelin.

This wonderful coming-of-age story also explores Miller’s experience with life, love and his opportunity to meet his heroes. It starts with how he was influenced by his sister’s rock album records and his subsequent desire to be a rock journalist.

Reception: It may have been a box office bomb but it received critical acclaim. It’s also the recipient of multiple awards and nominations from the Grammy Awards, Oscars and the Golden Globes.

Summary: Dewey Finn, played by Jack Black, struggled to make it as a rock star but ended up being fired by his band No Vacancy after some stage antics that affected their live performance. Aside from his piling debts and overdue rent, he also became depressed when he learned that his group already replaced him. Left with not a lot of choice, he landed a job as a substitute 4th grade teacher in a prestigious but uptight prep school after he disguised and pretended to be his roommate who was the one offered the position.

He realized his students’ potential after hearing them during music class. He then began to form a band so they can join and win the Battle of the Bands.

Reception: Aside from multiple nominations, School of Rock also became the highest grossing comedy of all time before Pitch Perfect 2 took the spot in 2015.

Summary: The Vince Lombardi High School never had permanent principals because they’re always suffering from nervous breakdowns mostly due to the students who happen to be huge fans of rock ‘n roll. In addition, they had little or no regard for education. Riff Randell is their leader and she’s also the biggest fan of The Ramones in their school. The new principal, Miss Evelyn Togar, swore to put an end to the craze especially since she hates rock music so much. When she, along with other parents, tried to burn a bunch of rock records, the students rebelled and took over the school. The Ramones, who became honorary students, joined them.

Summary: Based on British author Nick Hornby’s 1995 novel of the same title, it follows the storyline of Rob Gordon who’s a music lover and former DJ. He owns a record store, Championship Vinyl, where he spends most of his time. After Laura, his most recent girlfriend, dumped him, he decided to try to figure out where he goes wrong with his relationships. Musically knowledgeable but with very poor understanding where women are concerned, he decided to compile his ‘top five lists’ for practically everything. With the help of Dick and Barry, they would often mock their customers’ musical tastes and preference.

He eventually tries to win Laura back.

Summary: Loosely based on The Who’s 1973 rock opera, this drama film depicts the story of Jimmy Cooper – a young London-based Mod who hated his job as a mailroom boy. He attempts to escape his boring, mediocre life by partying, dancing and taking amphetamines, riding his scooter and cruising all over the city – this is where he feels free and happy. But everything starts to go downhill when he and his friends got involved in a huge brawl with some motorcycle-riding Rockers and was arrested.

He then lost his girlfriend and if that wasn’t enough, he also found out that his Mod idol called ‘Ace Face’ works as a hotel bell boy.

Reception: With generally positive reviews, film critic Janet Maslin from The New York Times wrote: “…slice-of-life movie that feels tremendously authentic in its sentiments as well as its details.”

Summary: A coming-of-age comedy drama about a group of teenage best friends Curt Henderson and Steve Bolander (who recently graduated from high school) and all their adventures in one night before they go off to college the next morning. Curt, the recipient of a $2000 scholarship, is having second thoughts about leaving their town. Steve, on the other hand, is dying to get out of Modesto even if that means leaving his girlfriend, Laurie who is also Curt’s sister.

Reception: It was a huge box office hit with gross sales of $140 million. It also received an Academy Award nomination for Best Picture. Time magazine’s Jay Cocks wrote that the movie “reveals a new and welcome depth of feeling. Few films have shown quite so well the eagerness, the sadness, the ambitions and small defeats of a generation of young Americans.”

Summary: This comedy film follows a typical day in the lives of the Fab Four as they travel to London for a show. The band’s first feature film combines music and comedy like the scene where they were shown trying to escape a horde of screaming fans and press members. They needed to use their wit and a couple of tricks so they can get past them and reach their destination for a scheduled live performance on TV.

They also had to rescue Paul’s troublesome grandfather and just before the concert starts, Ringo goes missing.

Reception: The reviews were generally positive and the film grossed $12,299,668 at the box office. Named by Time magazine as part of the 100 greatest films in the last 80 years in 2005 and nominated for two Academy Awards, film critic Roger Ebert described ‘A Hard Day’s Night’ as “one of the great life-affirming landmarks of the movies.”

Summary: This documentary parody depicts the fictitious legendary British heavy metal band, Spinal Tap and their attempt to make a comeback tour in the US and also to promote their latest album ‘Smell The Glove’. It’s a satirical portrayal of the wild behavior, crazy antics and sometimes musical pretensions of various rock acts. It’s being filmed by a fictional character, Marty Di Bergi (played by the actual director of the film). There are also scenes of Di Bergi’s one-on-one interview with the group members. From canceled appearances to rising internal tensions, Di Bergi saw it all.

Reception: Widely considered as one of the best films on the year it was released, Roger Ebert wrote: “This Is Spinal Tap is one of the funniest, most intelligent, most original films of the year. The satire has a deft, wicked touch. Spinal Tap is not that much worse than, not that much different from, some successful rock bands.”