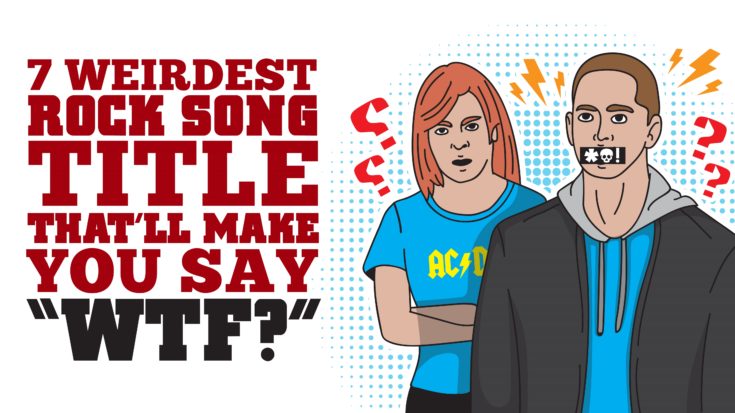 We Have No Words

We really don’t know what the writers of these songs were thinking. But we sincerely hope there’s a good explanation behind each title.

We don’t even know where to begin. The title itself is enough to make you cringe. It’s like it’s one of those things better left alone. But if you actually listened to the song, you probably wouldn’t know how to react to the following lines: “I got it from the toilet seat / It jumped right up / ‘N’ grabbed my meat / Got it from the toilet seat / My balls feel like a pair of maracas…” Anyway, this track is part of Frank Zappa’s rock opera released in 1979, “Joe’s Garage” which according to him, is a “stupid little story about how the government is going to do away with music.” Phil Kaufman, Zappa’s road manager, is responsible for uttering that line of course within the context of the story used in the album. Whatever the ‘inspiration’ is or no matter the back story, we just can’t get over how weird it sounds.

If you have coulrophobia, you might want to skip this one. It’s timely though given that 2016 seemed to be the year when these scary, not-so-funny, fear-inducing comical entertainers dominated the streets all over the world. It’s the perfect song to play if you just found out there have been scary clown sightings in your neighborhood. Or maybe, just maybe, it’s THEIR anthem. *Proceeds to hide underneath the thickest blanket we can find.* But seriously, Alice Cooper, what the hell? To be fair, the song is good – it has Alice Cooper style written all over it, a classic piece definitely. The silver lining here though is the line, “And if you think this isn’t real / I’ll show you wounds that never heal / To them I’m just a happy meal…” Why? Well it sounds a lot like Ronald McDonald. LOL. Still, it’s a peculiar choice of words for a heavy metal track.

You should see the look on our faces right now. It’s the same look we have when we find out Grandma’s Danish Butter Cookie tin contains sewing tools and no pastries. Ignoring the title of the track, this is actually one wicked song. Incredible tone, epic bass line and riff, and the mind-blowing guitar sounds – it’s an absolute masterpiece. It’s clean but heavy. We don’t have a problem with how amazing this is. Well, except for the title. It’s just so difficult when somebody asks you, “Hey what’s your favorite Tool song?” And you’re there looking awkward and embarrassed as you say, “Uhm, ‘Hooker With A Penis.” Okay, that’s not weird at all. Thank goodness that line doesn’t appear in the lyrics or else, it will be difficult trying to crank this tune up. Then again, that didn’t stop this track from being widely acclaimed by critics and as it happens, it’s also a fan favorite.

4. Pink Floyd – “Several Species of Small Furry Animals Gathered Together in a Cave and Grooving with a Pict”

Pink Floyd has always been about experimenting and thinking out-of-the-box. But this is probably one of those times when we’re seriously confused as to what’s going on with the title. This is so unique that the surf rock group Man or Astro-man? had a song based on this track called “Many Pieces of Large Fuzzy Mammals Gathered Together at a Rave and Schmoozing with a Brick.” If rock acts actually started following this trend of making long titles, we’re going to need a memory enhancer. Of course, at first glance, it seems like Roger Waters picked out random phrases and put it together but there’s actually a hidden message in it. If you play the song at half-speed, a little over four minutes, you will hear: “That was pretty avant-garde, wasn’t it?” Ugh, did we already say this man’s a genius? And oh by the way, Picts were indigenous people in the eastern and northern part of Scotland during the early medieval period.

5. The Ramones – “Every Time I Eat Vegetables It Makes Me Think Of You”

For the record, we have absolutely zero idea what the song is about. Your first impression after reading the title would probably be, “That doesn’t sound too romantic.” But when you actually try to sing it, you may be left with more confusion: “She had a very bad affair / With some cat from Hiroshima / She turned into a head of lettuce..” However, there were some people who tried to decipher the meaning behind it and you’ll be blown by what they found out. The woman is said to have descended into madness thus the ‘head of lettuce.’ The ‘bin’ is actually a ‘loony bin’ where she eats Thorazine, an antipsychotic medication. So let’s be clear about one thing, these are all speculations from fans. But we’re pretty convinced it’s what the song is all about. And if it’s accurate, well, it only proves what we knew all along: The Ramones were geniuses.

This is on another level of weirdness. It’s a sick, twisted kind of song. But well, ‘weird’ is Marilyn Manson’s middle name. His songs and music videos always have a touch of dark elements to it and this one is definitely not an exception. It’s instrumental (yeah, we’re pretty relieved we don’t have to deal with ‘what’ the track is actually about) but there’s still that creepy vibe to it. There are no lyrics but you can hear various people talking in the background. Maybe it’s just fitting that this is included in his album, The Golden Age of Grotesque. AllMusic’s Stephen Thomas Erlewine reviewed the album and wrote, “[…] in an era when heavy rockers have no idea what happened in the ’80s, much less the ’30s, it’s hard not to warm to this, even if his music isn’t your own personal bag.” True enough, the song’s tune is catchy but yeah, maybe don’t mind the title at all.

7. The Beatles – “Everybody’s Got Something To Hide Except For Me And My Monkey”

No, this is not a hoax and neither is this a prank. If you don’t know it yet, this song is really from The Beatles – you know, the legendary Fab Four. Not surprising though, this has the longest title they’ve ever released. Most people, including Paul McCartney himself, thought the song was about ‘heroin.’ But the truth is, John Lennon wrote it for his wife. He said, “That was just a sort of nice line that I made into a song. It was about me and Yoko. Everybody seemed to be paranoid except for us two, who were in the glow of love. Everything is clear and open when you’re in love. Everybody was sort of tense around us: you know, ‘What is she doing here at the session? Why is she with him?’ All this sort of madness is going on around us because we just happened to want to be together all the time.” Well, okay. The title may be somewhat ‘meh’ or ‘ugh’ but it still is a killer jam. No wonder Paul believed this was a track about drugs!