11 Pick-Me-Up Rock Songs To Get You Through Mondays 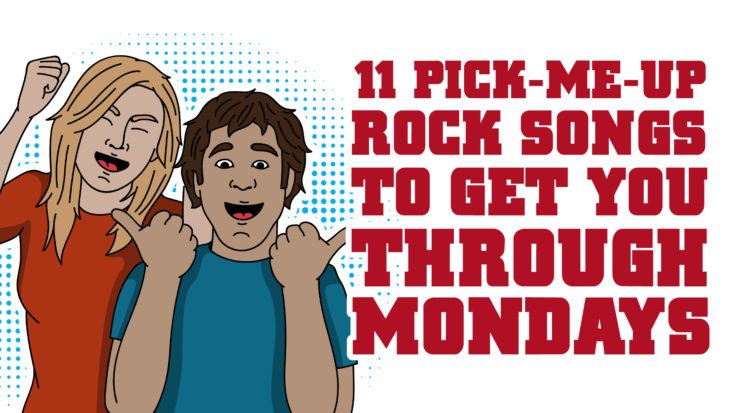 The only thing that goes by faster than weekends is the popularity of today’s music. LOL, just kidding. Coffee is great at waking you up in the morning but there’s nothing like a pump of good beats to put you back into work mode. Here’s a list of songs to make Mondays easier:

This is what we’d love to crank up so early in the morning. It’s the perfect pick-me-up too for every mid-day slump. Who needs a cup of Java when you can listen to Metallica at full volume and blast your eardrums in the process? LOL. Lars Ulrich once referred to it as a ‘very gutsy music’ and we couldn’t agree more. There’s only one thing we hate about this song though – that it’s only 8 minutes long. We definitely wouldn’t mind if it goes beyond that. The music is just so good, you don’t want it to end. Every playlist needs at least one Metallica track and if we had to choose (it’s not an easy decision, by the way), it definitely has to be this. It will blow your mind. If you love metal, there’s absolutely no way you can dislike this. It’s monstrous and that’s probably why we love it.

This needs no introduction. AC/DC is so metal they create mosh cities instead of mosh pits. What else screams rock ‘n roll than a drummer smoking while working it behind the kit? We all strive to be as chill as him. You’re lucky if you’ve been to any of their concerts (the entire experience is almost spiritual) but if not, you can still sit back and plug in your headphones so you can listen to this masterpiece. Have you ever heard a song so full of grit, energy and life that it basically gets you all pumped up? You know, when you hear it, you just feel like breaking into a run because they basically made you feel extra energetic? Well, this track does that and more. You can even listen to this while working out. The thing is, the more you play it, the more it gets to you. It’s highly addicting like that.

This is pretty much why we need a Led Zeppelin reunion. Nobody does it like them. We’re sort of sure everyone who saw this insane live performance were all like, “What in the world did I just witness?” Because you know, that’s a common reaction for people who have been fortunate enough to see these rock gods at work. They’re all playing like there’s no tomorrow and wow, it’s hands-down amazing. Here’s the deal, each time they perform this though, it always feels fresh and different. It’s so powerful and the boys were definitely on fire here. There’s no comparing their musicianship to everyone else. They’re simply on another level – unrivaled and unmatched up to this day. And we could easily add some of their other classic hits to this list but there’s just something about ‘Whole Lotta Love’ that gives you that feel-good vibe. And well, we really need that on each start of the week. LOL.

That solo might make you want to hold on to your seat. It reminds us of our crazy, angst-filled days as youths. You see, this is the mark of an iconic song – it doesn’t just disappear from the face of the earth after a few weeks or even months. Well it’s been 25 years since it was first released but dang, people still love it even the younger generation. Nirvana frontman Kurt Cobain shared to the Rolling Stone magazine, “I was trying to write the ultimate pop song. I was basically trying to rip off the Pixies. I have to admit it. When I heard the Pixies for the first time, I connected with that band so heavily that I should have been in that band—or at least a Pixies cover band. We used their sense of dynamics, being soft and quiet and then loud and hard.” Well, that definitely worked.

This ground-breaking song is the product of sheer brilliance. It has to land a spot on this list because duh, just listen to it. It’s the kind of sound that you’d love to hear first thing in the morning. Whenever you feel like dragging your feet to start your week, just plug this in. One thing we love about The Who is that the band had so much energy! Of course, Pete Townshend and his guitar smashing antics are legendary but the rest of the boys are insanely awesome too. They definitely put on a great show. They sure have massive talent and this song surely has that ‘in-your-face’ kind of feel. There are so many great guitar sounds – rich, powerful and something you’d love to put on loop. Also, can we take some time to appreciate how incredible the intro is? It’s really telling you you’re about to hear something explosive.

First of all, we’d like to point out that our hearts go out to that pitiful drum set. It didn’t do anything wrong but dang, he must’ve retired after this performance. Just notice those drum fills – ladies and gentlemen, that’s how a god does it. Legend has it that alone could wake you up more effectively as if you’ve had two shots of espresso. 🙂 Did you know there’s even a petition launched to replace the National Anthem with ‘War Pigs’? It’s the age of the internet so anyone can start such campaigns. Also, it was able to gather around 1,400 signatures. That’s not enough so we shouldn’t expect this song to be played during sports events or at least, not yet. Black Sabbath just took heavy metal to a whole new level. If you’re not yet a big fan of the band, this track will undoubtedly win you over easily.

It has one of the most bad ass riffs of all time, enough said. This may not exactly be their pinnacle moment but wow, it’s definitely one of their finest live performances ever. Van Halen really knows how to rock! If anyone has a time machine, can we use it to travel back and attend this show? The guitar solo is way too good. What have we done to deserve this kind of awesome music? Today’s songs can’t hold a candle to this. This is on a different league – there’s incredible guitar work and so much raw energy. Only Van Halen can make ‘running with the devil’ sound so cool. Man, after all these years, we still get chills each time we listen to it. It’s not just for Mondays, better put it on repeat every day of the week. It’s refreshing and well mind you, it’s quite stress-relieving too.

It’s a classic masterpiece that deserves to be in every classic rock fan’s playlist. If there’s such thing as a perfectly written song, this would have to be it. With the kick ass riff and overall awesome tune, your neighbors will thank you if you really crank this one up. If they don’t like it, you might need to move away from them – nobody likes people with poor taste in music. Lol! Anyway, this is what amateur guitar players like to learn first. And just listening to it makes you want to grab your guitar too because the intro is pretty easy to play. Don’t you just want to feel grateful to the person who introduced this to you? It opened up a whole new world and it’s almost as if you got infected with the rock virus that you just don’t need a cure AT ALL. Morning or mid-day slump? Play this loud.

You didn’t think we’d pass up the chance to add Aerosmith to the list, did you? We can actually just put every single classic hit from The Bad Boys of Boston here and voila, it will make your week way better. How else can you make it through Monday, right? You just need a dose of Steven Tyler’s raspy voice. Also, the guitar rhythm is so good, it will stay stuck in your head for days. Man, Joe Perry is quite something! It makes you want to dance around and sing along and feel excited for the rest of the day. Whoever doesn’t like this needs to get their hearing checked out. This is epic on so many levels and remember, Aerosmith is ALWAYS a good idea.
P.S. If you notice the guy wearing a Nirvana top, it’s either he’s in the wrong concert or he grabbed the wrong shirt. Ha!

We’d be lying if we say we don’t know the lyrics to this song by heart. We can even sing along (with some clapping and stomping to go with it) to the beat. We are well aware that Freddie Mercury’s a genius (case in point, other classic hits like ‘Bohemian Rhapsody’, ‘I Want To Break Free’ and ‘We Are The Champions’) and this track is a clear, solid evidence of that. He is one of the few who promised to rock us and did exactly that and more. Man, we can’t even begin to say how much we love this track. It’s what rock ‘n roll is all about. Think about it, it was released almost 40 years ago and it’s like not a year has even passed. It’s still one of the greatest songs we’ve ever heard. This is what we listen to every morning – doesn’t matter if it’s Monday or Friday, it still kicks ass.

Axl Rose in his glory days is unstoppable. He may already be in his 50s but he still knows how to rock. If this song can’t get you up and running then nothing else will. This goes great with some pieces of French toast too, LOL. After listening to it, you’ll be absolutely ready to conquer the rest of the week. We were actually debating whether to add this one to the list or simply go for ‘Sweet Child o’ Mine.’ After all, it’s among their greatest hits and so full of raw energy, it would also sound great on your ‘Monday Playlist.’ Then again, the more you listen to ‘Welcome to the Jungle’, the more you get hooked. Is this one of the tracks you look forward to hearing live? We bet it’s an entirely different experience when you compare it to the studio version. Even today’s kids love it too! You’re welcome.