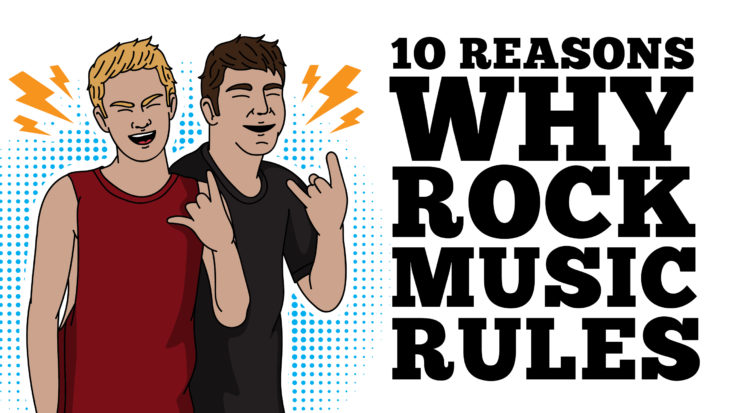 We’re not saying rock is better than any other music genre but… well basically that’s what this post aims to prove. LOL!

1. Rock artists play their own instruments.

It doesn’t rely on auto-tune or computers. Period. Have you ever turned on the radio and hear today’s pop songs which are laced with all these technology that it’s making your ears bleed? Well, you’re not alone. There’s no such thing when it comes to rock. And members get famous because of their legendary skills in playing musical instruments. Need proof? There’s John Bonham, David Gilmour, Jimmy Page, Paul McCartney, Neil Peart, Angus Young, Bill Ward, Eric Clapton, Slash, Keith Richards, Keith Moon, Pete Townshend, James Hetfield, and Lindsey Buckingham. The list just goes on and on. It’s only in rock where you can hear mind-blowing guitar and drum solos or isolated bass tracks that are as legendary as the whole song. Seriously, if you’ve heard any pop tracks that will even come close to these, please let us know. We’ve been searching for them our whole lives and we haven’t found anything. LOL

Perhaps the perfect example would be ‘Don’t Stop Believin’’ by Journey. While it doesn’t exactly have the deepest and most profound meaning (just telling you to ‘hold onto that feeling’), it’s certainly more motivational than this particular line: “My Anaconda don’t want none unless you got buns hun…” Wait, what did we just read? Uhm no. Aside from being motivational, rock songs also have enough depth to make you think. Grateful Dead did a mighty fine job at making tracks which were open to various interpretations. There are even websites dedicated solely to explain the meaning and background of each of their classic hits. And well, Pink Floyd is also into stories. They’re more than just random words that fit the melody. There are characters and the whole idea makes you think. Yeah, well sorry. We still haven’t figured out what Anaconda means and it sure as hell doesn’t refer to snakes. 😛

3. Most rock bands write their own songs.

Let’s exclude Taylor Swift (from this narrative, lol) because she obviously pens her own songs. But the thing here is, especially classic rock artists, they painstakingly come up with their own tracks. They don’t let someone else do it for them. Case in point, John Lennon and Paul McCartney who wrote most of The Fab Four’s classic hits and they both made it to the top 5 of the Rolling Stone magazine’s ‘100 Greatest Songwriters of All Time.’ And even Jon Bon Jovi was inducted into the Songwriter Hall of Fame. These rock stars weren’t just handed out songs to sing. They had to extract their creative juices to create brilliant masterpieces. Some of them even had to stay inside the recording studio for days on end so they have something new to offer to their fans. But all things considered, it’s not exactly surprising. With rock, you really had to make a name for yourself. With pop, if you look nice on TV, it’s all good – the rest will be taken care of by others (hint: auto-tune).

LITERALLY. That’s the thing with rock – you can listen to it a week, a year, a decade after it was released and it still sounds so excitingly fresh. You watch the TV show Supernatural and it’s somehow keeping classic rock alive. You go to the theater for Suicide Squad and a cover version of Queen’s ‘Bohemian Rhapsody’ is playing. In fact, many YouTube sensations enjoy making their own rendition of classic hits. You know that’s one of the most awesome things with rock, you just need one introduction and it will open up all the doors to great, eargasmic music. Once you go rock, you can never go back. Okay, that was pretty lame. But it’s true. The moment you get a taste of The Who, Pink Floyd, Rolling Stones and AC/DC; you’re going to end up questioning your life choices and why once upon a time, you became so obsessed with pop and EDM.

5. Their concerts become a religious experience.

Today’s music festivals and concerts don’t hold a candle to Woodstock, Isle of Wight and all the other concerts you wish you could have gone to. And for heavy metal events, we have two words for you: MOSH PIT. There’s just nothing like it. If you haven’t experienced it before, you’re missing half of your life. It needs to be on your bucket list. Look, if we had a time machine and we can only go back to one specific date and place, without a doubt it would be Woodstock. That was something else. Sure, the conditions weren’t perfect but hey, it was all about you and the music. It wasn’t about celebrities hanging out with you with a bunch of paparazzi following them around or even just about fashion. Although to be fair, let’s be thankful to all the stylish gig-goers back then because they influenced the ‘music festival’ look.

You know you’re young when you see a triangle with a rainbow on one side with black background as nothing more than a really cool wallpaper or t-shirt design. The creativity of rock stars isn’t limited to their musicianship – it goes beyond that, as evidenced by their visually appealing album covers. Did you know it was Freddie Mercury who single-handedly designed Queen’s logo? And how can we ever forget that artwork from Grateful Dead? They put a lot of hard work into the whole album and since that doesn’t seem to be enough, they have to make the covers epic. Wow. You rarely have anything like it these days. It makes you terribly miss those times when the cover alone makes you feel excited. Now all you have are simple photos of the artist and nothing more. Although to be fair, heavy metal albums may be creepy and dark but dang, they’re pretty creative too!

7. They have better music videos.

Gone were the days when 90% of the music video isn’t focused on ‘twerking’ and other weird dance moves. When was the last time you saw something that gave you goosebumps? But it’s not just classic rock though, even heavy metal MVs have great stories. Some even have powerful messages such as the cycle of bullying and violence. It really makes you say WOW. It’s so rare nowadays that they should be considered real gems. LOL. If you need more than our personal opinion, head on to the Rolling Stone website where they once asked the readers what they think is the best music video of all time. And the result? Majority of those who made it to the top 10 are from the rock genre like Guns ‘n Roses ‘November Rain,’ Pearl Jam ‘Jeremy,’ Soundgarden ‘Black Hole Sun,’ Nirvana ‘Smells Like Teen Spirit’ and Foo Fighters ‘Learn To Fly.’ Need we say more?

Hold your horses! We know this is going to create some kind of ruckus and so before we even start engaging in word wars and debates, please go back to the very first sentence of this post. If you need a reminder, we warned you that this is all for fun. Okay? So here we go. Some of the greatest vocalists we know are rock stars including Freddie Mercury, Axl Rose (who happens to have a legendary vocal range and was even the subject of study), Robert Plant and Brian Johnson. They aren’t just amazing as vocalists, by the way, they happen to be some of the greatest frontmen of all time. Take a look at Freddie Mercury – he only had his bottomless mic stand as prop and yet he always managed to blow everyone away during concerts.

P.S. Let’s not even compare this to gigs where the ‘artist’ just brings a laptop.

Variety is the spice of life and not all rock music lovers are into classic rock ‘n roll the same way not everyone is a fan of heavy metal. Then again, there’s always something for everyone. Where do we even begin? There’s rock ‘n roll, folk rock, country rock, psychedelic rock, glam rock, alternative rock, trash metal and pretty much anything and everything in between. But it doesn’t mean there are no fights or arguments. You see people bickering about things like who’s a better drummer or which artist has the album of the decade. You know, stuff like that. Some even argue on the exact sub-genre. Sometimes, you feel like saying, “Let’s just enjoy the music please.” Still it’s fun to have so many songs to choose from which can be classified as rock. This is pretty much why there’s no more room in our hearts for pop, and techno.

10. They’re some of the best-dressed musicians.

Rock stars are stylish people, they’re trendsetters. They don’t find the need to flash sparkly jewelries or wear barely-there outfits whether in concerts or while just taking a walk around the neighborhood. In fact, rock has the most finely dressed musicians. Stevie Nicks and her bohemian chic attire, Steven Tyler and his colorful scarves, Freddie Mercury and his flamboyant clothes, David Bowie and his androgynous outfits, Mick Jagger and Keith Richards’ elegant suits – they’re definitely fashionable. Or if you prefer street style, there’s always Axl Rose in his early years as frontman of Guns ‘n Roses. He doesn’t mind wearing tight pants and well, he obviously looked good in it. You couldn’t spot them wearing big blings or accessories and clothes that will make you say, “WTF are those?” Steven Tyler and his sandals may be an exception but let’s cut him some slack. He still knows how to stay stylish at his age!