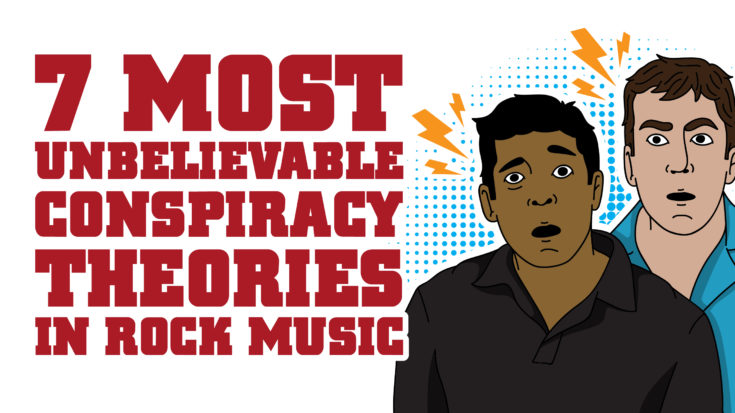 They’re Not Real… Or Are They?

Who doesn’t love a good conspiracy theory? To be honest, we actually envy these people who have enough time on their hands to do extensive research and connect the dots. So we’ll revisit some of the craziest, out-the-box theories classic rock fans had.

There were so many issues surrounding Kurt Cobain’s death owing mostly to the lack of documentation during his last week prior to the tragic event. Some pointed to the culprit as his choice of guitar. According to some fans, the left-hand guitar made his scoliosis worse which further pushed him towards drug use. But that’s not the worst of it. One of the craziest theories about his supposed suicide was that his then-wife Courtney Love had something to do with it. Tom Grant, a private investigator hired by Love to find Cobain, claimed that she hired men to assassinate the famous Nirvana frontman. There’s even a docudrama called ‘Soaked in Bleach’ that talked about it. It was also reported that Love was able to obtain a cease and desist order which banned the film from being shown in theaters. Take note that this was released on June 11, 2015 so the theory has not yet been laid to rest.

6. The US government killed John Lennon.

If Kurt Cobain’s conspiracy theory made a little sense, this one is so far-fetched that it borders on the ridiculous. Okay, so here’s the deal. The assassin, Mark David Chapman, was nothing more than a tool used by the CIA to murder John Lennon. First off, the CIA allegedly wants the famous Beatle dead because of his much-publicized political views. He was very vocal about his stand on various issues and it was said that the government wanted to silence him completely. Author Fenton Bresler believed that Chapman was a ‘Manchurian Candidate’ or an ordinary man brainwashed into doing other people’s bidding. He further supported this claim with the fact that Chapman has no history of mental illness. Another theory from Phil Strongman addresses the precision of the gun shot. He said that it was the work of a professional shooter and therefore concluded that Chapman received training from the CIA.

How many times have we heard this? Try scouring YouTube comments and somewhere there, you’ll find people still believing that Paul McCartney’s dead. They say their proof lies in the slight vocal difference, or the way he walks, or even his subtle mannerisms. It all began on January 7, 1967 (others think it was before that) when McCartney’s car (a Mini Cooper) became involved in an accident. However, the Beatle himself was not driving the vehicle and he was not even in it. Then again, ‘reports’ vary as to the supposed exact date of his death – those who believed in the theory were convinced it happened somewhere in the mid ‘60s. They further claim that the rest of the band decided to cover it up and use an imposter. What are the said clues? For one, they say when you play ‘Revolution 9’ backwards, you could hear ‘Turn me on, dead man.’ Another one is the line ‘He blew his mind out in a car’ from ‘A Day In The Life.’ Nope, we’re still not convinced.

We’re inclined to believe that some of these people who subscribe to conspiracy theories just watch too many Hollywood movies. But like with what happened after The Doors’ frontman Jim Morrison died tragically. Especially because no autopsy has been performed, his exact cause of death will always be subject for debates. It was officially listed as ‘heart failure’ but many of his fans don’t buy that. There are so many questions surrounding this event. It didn’t help that some band members seemingly expressed their doubts too. Keyboard player Ray Manzarek said, “I often wonder if his death has been an elaborate charade.” And drummer John Densmore also shared in one interview, “Jim was a crazy guy. No one I ever met would be more capable of faking their death than him.” A few decades after his death, plenty of people claimed to have seen him in San Francisco and even Paris. Others say he was spotted living the life of a hippie.

He was the original leader of The Rolling Stones but was eventually dismissed due to his drug problems. When he left, Mick Taylor took over his place. A month later, he died after drowning in his home’s swimming pool. He became part of ‘The 27 Club.’ According to the coroner’s report, his body was pumped with drugs and alcohol that caused his heart and liver to enlarge. There are those who think ex-bandmates Mick Jagger and Keith Richards had something to do with it but majority of those who believed the conspiracy theory of murder pointed to one of the people present in his house the night of his death – contractor Frank Thorogood. Stones’ road manager, Tom Keylock said that Thorogood admitted to the deed on his deathbed in 1993 when he told Keylock that, “It was me that did Brian. I just finally snapped.” Perhaps it will remain as a speculation since there will be no re-investigation of the case.

Jimi Hendrix’s death is widely disputed. Although he was already unresponsive and unconscious when the ambulance was called, he was still breathing. Later in the hospital, he was pronounced as dead. After a thorough post-mortem examination, the coroner concluded that the legendary guitarist died because he was intoxicated with barbiturates and he ended up aspirating on his own vomit. His cause of death was asphyxia. It’s not exactly something that would entice conspiracy theorists but somehow, they always find a loophole in everything. There are various claims including the reason for his aspiration was that the US security forces were not impressed with Hendrix’s influence on the youth so they waterboarded him with red wine. But another one says that it was his manager Mike Jeffrey who murdered him so he can collect the $2M life insurance policy. He then hired a gang who forcibly filled Hendrix with wine and pills.

We hope you’re not drinking anything because chances are, you might end up spitting them out. Cue drum roll please. There are people alleging that the government created the hippie movement. The stars of the ‘60s counterculture were basically kids of the military officers and were there to divert attention from the military facilities. This, in turn, will end up undermining anti-war protests and rallies too. Thus, whenever the long-haired and fashionable hippies were on the forefront of anti-war movements, nobody from the mainstream media would take them seriously. Add in the fact that although drugs were heavily associated with them, nobody was sent to jail. It was even said that LSD came from the government and they used it to test the effects on unsuspecting Americans. They would slip acid during concerts, parties and even restaurants. This is often referred to as part of the Project MKUltra. While this specific CIA program does exist, we’re not so sure about the theory on how the hippie movement was created.