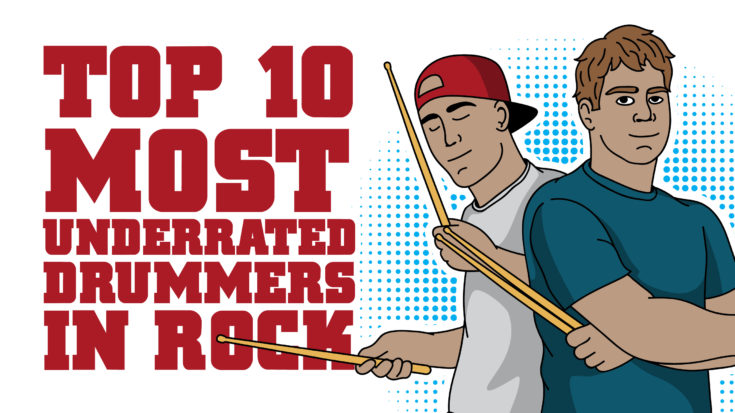 The Underrated Kings of Slam

Let’s call them the unsung heroes of rock groups. They’re often overlooked and you can’t really call yourself a fan of a certain band unless you know their drummer’s name. But then again, there’s John Bonham, Neil Peart and Keith Moon – three of the best drum stars in the history of rock. We know their names, we know their styles.

But what about those underrated men behind the kit? They deserve as much credit because let’s face it, it’s not easy being responsible for the driving beat of the band’s sound.

Just how underrated is Matt Tong? Let’s see, he doesn’t even have his own Wikipedia page. Okay, not that THAT is exactly the measure but it does tell you a lot. Anyway, anyone who’s a fan of Bloc Party (or at the very least, has heard their music) knows he’s a legend behind the kit. Take a look at his video to find out why. Oh and it’s not the easiest song to play, by the way.

Fun Fact: Back in 2015, Matt Tong released a solo track titled “Christopher” which basically incorporates rock ‘n roll, some early 90s grunge and punk. Also, after he left Bloc Party, he had other projects such as Red Love, Algiers and L’Amour Bleu.

If you notice in the video how Tong is going absolutely nuts on the drums, that’s his typical style. He’s mostly known for his highly energetic drumming. It’s fast, intense and all sorts of epic.

It’s funky and laid back. And while he doesn’t exactly go as wild and crazy as the more popular drummers, he still plays some pretty complex rhythms. In fact, during the first live show of The Stone Roses in London, The Who’s Pete Townshend commented that next to Keith Moon, Reni was the most naturally gifted drummer he’s ever seen. That compliment was truly something else.

“Drummer Reni is magnificent. In Amsterdam, I’d watched him soundcheck for an hour on his own, slapping 17 shades of shining shite out of his kit for the sheer unbridled joy of playing.” – NME

His playing is so groovy, soulful and inventive that it becomes difficult to take your eyes off of him during their concerts and shows. This drum solo in this video may not be his best (he was nearing 50 at the time) but at his prime, he was quite unstoppable.

In less than thirty seconds from the start of the video, you’d most likely find your jaw on the floor and no, I’m not kidding. That was on another level. And the thing is, he’s a real natural. He doesn’t drum through solos stiffly and without emotion, he always plays through intuition. It’s like music pours out of him every single time. He has a distinctive drumming style that easily puts him among the best.

His performance on “Sunday Bloody Sunday” is legendary. And he always brings it during live shows.

His playing is explosive and has a bit of an old school vibe. It’s something that keeps you on the edge of your seat. And one of his inspirations in Led Zeppelin’s John Bonham whom he tags as a major influence in his playing by saying, “ …because [of him] I try and play with as much bombast as I possibly can.” He’s obviously not your average drummer because he has this otherworldly feel whenever he plays.

“Then there’s a whole bunch of stuff from Haiti because my dad’s Haitian. My favorite Haitian drummer is this guy called Azor… …The Haitian music that moves me has the drumming from the voodoo rituals. It moves me because the patterns are connected to different spirits; it’s a spiritual thing that is interconnected with dancing, sacrifice and devotion. It’s fully passionate. There is nothing contrived about it.” – Jon Theodore

Dave Grohl once said that Theodore blows him away. Same, Dave, we feel the same way.

Dominic Howard’s playing is dynamic and tight. And anyone who has followed his career knows he only got better and better with every single performance. He started playing the drums at 12 after seeing a jazz band perform at his school. Watch this clip and appreciate his accuracy. Some say it doesn’t look difficult but seriously, the guy has killer chops.

“In the first five years, before we got signed, we took attempting to be really good very seriously. Our music was very complicated, and in many ways – very over-complicated and technical. We came from a (musically) uneducated technical background.” – Dominic Howard

It’s hard to doubt his supremacy among his peers. Besides, he contributes a lot into the creation of Muse’s sound. Some songs in the group’s catalog clearly showcases his stellar drumming – of course, not to mention how his beats became the very soul and core of the tracks.

He’s had plenty of great stuff highlighting his excellent drumming style and technique. But we guess everyone would agree he’s highly underrated as well. He’s also one of those rock stars who hit rock bottom but fortunately, he managed to rise back up. Although it was unfortunate that when the masterpiece “Rock the Casbah” (which he musically wrote) was a global hit, he was already kicked out of The Clash.

“In 1983 Pete Townshend paid for me to come to Los Angeles to have the electric box treatment for heroin addiction. And while I was there the Clash were playing the U.S. festival and ‘Rock The Casbah’ was all over the radio waves of course it hurt. The good thing about it was that we all ended up friends afterwards anyway.” – Topper Headon

Although he was booted out, his contribution to the band was massive. He played a key role with his drumming.

Perhaps one of the reasons why Taylor Hawkins is so overrated is because Dave Grohl’s larger-than-life persona coupled with amazing drumming skills somehow always overshadowed him. Of course, it didn’t help that Grohl’s a great frontman and all-around cool guy. But anyway, Hawkins always plays with so much energy and his technique is all about power.

“I really just make music to amuse myself more than anything because I have to have something to do, a creative outlet outside of Foo Fighters. I just do. I am a creative person. I’m trying to make catchy music. That’s the trick always. I mean, even when we’re making Foo Fighters music, that’s all I want to do most of the time: as catchy as possible, even if it’s strange.” – Taylor Hawkins

When he did his solo project, Hawkins said his inspiration was Grohl and how he played everything. Well, we’d love to hear them jam again soon!

We’ll be honest here. We’ll never look at Chad Smith the same way again. Somehow scenes from Will Ferrell’s movies always pop into our heads. Nevertheless, what else can we say? He’s a tight and solid drummer. He’s accurate and proficient. And it’s actually not his fault that his doppelgänger’s a comedian. The resemblance is uncanny.

“I remember thinking, ‘Oh, cool, they have a record deal. Great! I’d love to be in a band that has a record deal. We started playing, and right away we just hit it off musically. I was like, ‘Man, this is a blast! These guys are great!’ … We were just doing what we do. We just jammed, which is what we still do today. It’s very similar.” – Chad Smith

In case you haven’t realized it yet, he’s a monster behind the kit. His drumming is sophisticated but powerful. Even Sammy Hagar once said, “He plays hard, man.”

This is one of the guys who didn’t exactly get the credit and recognition they truly deserve. With this much talent and skill, he’s certainly up there among the greatest slammers in rock history. In fact, we’d go so far as say he has his own category. He’s a league of his own. His drumming is extraordinary, stellar and just superb – he has great tone and it’s a real pleasure watching him slam those drums.

His “polyrhythmic” drum work is perhaps what sets him apart from everyone else. It’s unfortunate though that last year, he suffered his second heart attack – the first one was in 2014 when he also underwent an open heart surgery. But he’s doing well now and that’s all that matters.

Two words come to mind when we think of Terry Bozzio’s drumming: melodic and artistic. He’s not as flashy (okay, maybe a little because of his giant tuned kit) as others, he’s not even as loud or explosive. But there’s something about his musical composition that puts him on a whole different level. It’s not everyone’s cup of tea especially those who prefer wild and intense playing but his musicality is what propelled him above others.

“The idea of a solo drummer is a difficult thing to get across to people. They think of the thrashing and bashing of a typical rock-concert drum solo. And what I do is not that [laughs].” – Terry Bozzio

He’s well-known for behind the force behind Frank Zappa who wasn’t easy to work with musically-speaking given his penchant for difficult and complex compositions. But more than anything, Terry Bozzio has surprising range and impressive versatility.