10 Easy Songs To Sing When You Feel Like Showing Off 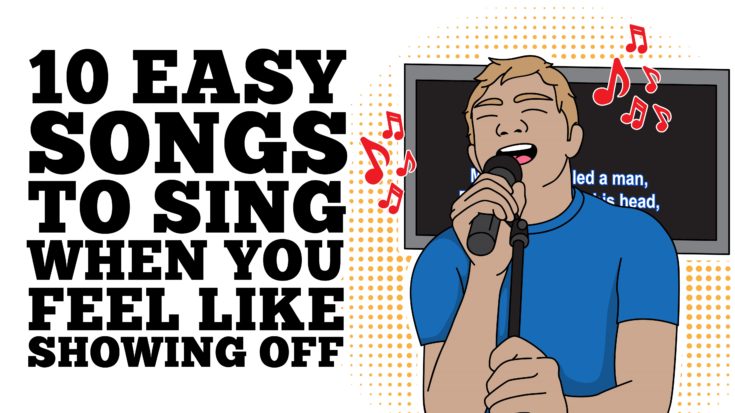 No Need To Sing At The Top Of Your Lungs

Not everyone’s gifted with golden pipes. So let’s be real, if you can’t flawlessly belt out to any Steve Perry song, then don’t. The last thing you want is for the skies to unleash their fury and rain down on you. You don’t want your neighbors hating you too. However, when the occasion calls for it, you should always be prepared to show off.

This still needs a little practice though. It’s been more than 50 years since Bob Dylan released it and I must say, it really never grows old. For all we know, he could’ve released this yesterday and it will still be just as good. Besides, this song is undoubtedly close to his heart given that this track propelled him from a folk icon status into a certified rock god. It sounds simple enough, right? According to Dylan in an interview with Playboy, “Last spring, I guess I was going to quit singing. I was very drained, and the way things were going, it was a very draggy situation … But ‘Like a Rolling Stone’ changed it all. I mean it was something that I myself could dig. It’s very tiring having other people tell you how much they dig you if you yourself don’t dig you.” So here, have some inspiration and sing – this song won’t give you a hard time.

Take it from Ringo Starr, you can pull this off! And it doesn’t take a set of golden pipes to sing this. And it’s from the greatest rock ‘n roll band to ever walk this Earth, no less. Besides, when Paul McCartney wrote it, he considered Ringo’s capacity in the vocal department. He said, “I was laying in bed in the Ashers’ garret … I was thinking of it as a song for Ringo, which it eventually turned out to be, so I wrote it as not too rangey in the vocal, then started making a story, sort of an ancient mariner, telling the young kids where he’d lived. It was pretty much my song as I recall … I think John helped out. The lyrics got more and more obscure as it goes on, but the chorus, melody and verses are mine.” No matter what your age is, this is a charming track to sing along to!

This isn’t the kind of song that’s intimidating, mind you. When we say anyone can sing this, we mean anyone (maybe, unless you know, you’re tone deaf lol). If all else fails, you can always sing Bad Company. It’s great music, what more can anyone ask for right? It’s a raunchy rock tune too so yeah, it’s one of the best tracks classic rock has to offer. It makes you miss that era, though. That was like the golden age of music. So when you belt out to it, that’s a lot like giving a nod to this legendary group. Don’t you just love this? Everything about it is absolute gold. We can literally play it all day and still love it the next. Oh and can we take a moment to appreciate how good this live version sounds? It’s like we’re listening to a recording! Dang, it’s a real gem.

Time to channel your inner Mick Jagger and bust out those dance moves! This is good for showing off to your friends or when you feel like letting steam off on boring weekend nights. Well, we’ve probably belted out to this a time or two alone. The thing is, when you sing it, it doesn’t have to perfect. You just need to totally ‘feel’ the moment. Jagger was spot on when he said, “It was the song that really made the Rolling Stones, changed us from just another band into a huge, monster band… It has a very catchy title. It has a very catchy guitar riff. It has a great guitar sound, which was original at that time. And it captures a spirit of the times, which is very important in those kinds of songs… Which was alienation.” We love how you need to have enough swagger and attitude to pull this off!

This isn’t like the Bohemian Rhapsody in terms of vocal performance. Although we admit we’re guilty of singing all the opera parts whenever someone plays that song. We just can’t help it! But anyway, if you feel like singing to Queen minus all the high notes (which could end in musical disaster and hoarse, scratchy voice), then this could be your go-to song. We all know how incredible Freddie Mercury’s range is but he just doesn’t need to show it off the whole time. He can sing the yellow pages and we’d still be mesmerized. That’s just how he rolls. According to the legend himself, “’Crazy Little Thing Called Love’ took me five or ten minutes. I did that on the guitar, which I can’t play for nuts, and in one way it was quite a good thing because I was restricted, knowing only a few chords. It’s a good discipline because I simply had to write within a small framework. I couldn’t work through too many chords and because of that restriction I wrote a good song, I think.”

‘Hotel California’ and ‘Desperado’ make it to our top songs we like to sing. But neither of them is easy on the vocal chords. We’d put ‘I Can’t Tell You Why’ here too but you need some serious pipes to do justice to that track. However, you may have to recruit your friends to sing along in some parts for ‘Already Gone’. But overall, it’s not that difficult vocally. This song just speaks to your soul but still manages to make you smile the moment you hear it – and well, it’s safe to assume that very few can accomplish that kind of feat. There’s something about it that stands out in their catalog and maybe that’s the reason why this has become one of our all-time favorites. For the record, we love all of their tracks but this one has a different vibe to it. Well, we’re pretty sure you can feel it too.

If the occasion calls for it and you want to be on the safe side, it’s always a good idea to pick The Doors’ classic hit ‘Touch Me.’ Putting all the crazy on-stage antics aside, when we think of Jim Morrison, we think of a great poet, someone who was so articulate and good with words. We can all agree this one’s a real masterpiece. Oh and it’s one of the most beautiful tracks we’ve ever heard. Add in the fact that it’s easy to sing, we conclude this is a total package. It as good as it gets. And that sound though! That’s so insane. We can’t even stop gushing about that insane bass line. That was so ‘in your face’! Even the drumming is too good for us. And well, who wouldn’t want to have their own mini concert to this? Jim Morrison had nothing but pure talent. Nonetheless, we’d love to sing to this over and over again!

Just in case you feel like singing something totally bad ass, then this is what we recommend. We don’t know about you but we certainly think this is one of Deep Purple’s greatest tunes. Even the guitar part looks easy… until you actually try it. Lol. But this is one of the songs that won’t make you breathless from all the effort you put into belting it out. Do you know how we came up with the tracks in this list? Yes, we tried them out. If our faces don’t turn red and our throats don’t get itchy from all the screaming and singing, then we can conclude it’s easy for anyone to sing it. And this one definitely falls under that. How long has it been though? It’s almost 47 years since it was released and yet it still feels like it was only yesterday. Now what are you waiting for? Sing it!

Okay, we’re going to come clean and say it now – this is our go-to song whenever we feel like exercising our set of pipes. Come on, Britney Spears covered this and if she can sing it, you can too! Lol. Legend has it that if you don’t like this, then there’s something wrong with your musical taste. And no, there’s no cure for that other than…more rock ‘n roll songs. Kidding aside though, you probably know this by heart and we can’t blame you. It’s like the anthem of our youth. This was the soundtrack of every teen back in the day. And of course, Joan Jett looked so hot and bad ass. This song is a real gem and it’s the ultimate crowd-pleaser. And when you need a little something to perk you up, you can always blast this on your speakers and belt out to it. We won’t judge.

We can almost hear you say, “Yes please!” We bet you didn’t expect this Dire Straits classic hit on this list. Or if you did, well good for you. We can’t say it enough – we absolutely adore this track. Although it was surprising that Mark Knopfler didn’t exactly think too highly of it initially. He once said, “I thought it was dull, but as soon as I bought my first Strat in 1977, the whole thing changed, though the lyrics remained the same. It just came alive as soon as I played it on that ’61 Strat which remained my main guitar for many years and was basically the only thing I played on the first album and the new chord changes just presented themselves and fell into place.” Then again, we still think this is incomparable and definitely one of the greatest rock songs ever written. Anyone who doesn’t agree can leave now. Lol, just kidding.