10 Insane Shred Guitarists We Just Can’t Get Enough Of 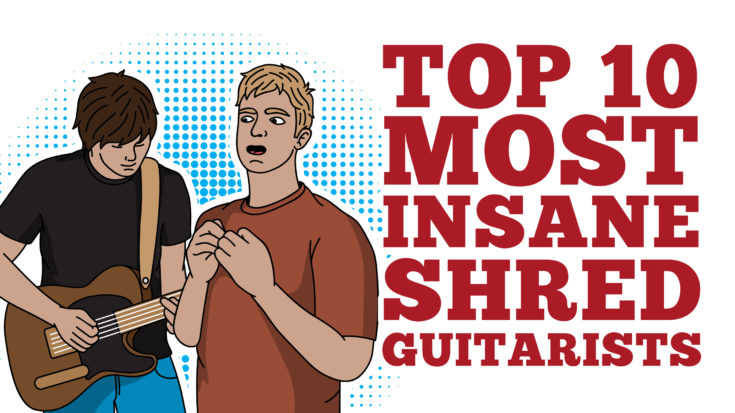 They get us dizzy, pumped up and exhausted just by looking at them. They changed how we experience music because there’s nothing quite like a shred guitarist doing his thing and all you can do is stare in awe and wonder how it’s possible to be breathing the same air as these superhumans.

Now we’re listing down the top 10 axemen so wickedly good, it’s almost a sin watching them.

Dang, the guy makes it look so easy! And to anyone who argues that shredding has no ‘feel,’ then look at this performance and tell me what your argument is again. Aside from being the co-founder of the American hard rock supergroup Mr. Big, he’s also a member of the heavy metal band Racer X.

“When I pick up my Ibanez Fireman, I know that everything is going to be all right. It is truly a pleasure to be able to express my anger, explore my melodic imagination, and simply play good rock and roll, with such a world-class instrument.” – Paul Gilbert

His stellar playing is on another level. It’s hard to watch his solos just once. You have to repeat it at least three times. Everything is a real killer. If anybody needs just ONE reason to start listening and paying close attention to shred guitarists, then this is it.

He made metal history with his solos. Period. He’s a superstar in Japan (to think Megadeth isn’t exactly HUGE in that country) and a living legend in the music industry. Aside from his tenure as a lead guitarist in Megadeth, he also played with Jason Becker for the heavy metal group Cacophony. And it was in 2003 when Friedman decided to move to Japan.

“It all comes down to the music. That’s why I’m here. As much as I love Japan, I would not be living 7,000 miles away from my family and friends in America if it weren’t for the great music. If you look at the Top 10 on the charts here, I can pick any day of the week and nine of those songs, I would definitely say, ‘I dig that a lot.’ In America, I would be very lucky if there was one song in that Top 10 that I could enjoy.” – Marty Friedman

This “Tornado of Souls” solo will give you all sorts of feels. “Musical perfection” comes to mind whenever I play the clip and no one just does it like him.

Technical-wise, Jason Becker is a god among shred guitarists. He was proficient and he knew how to make his guitar sing. He plays fast and he plays spectacularly good. Anyone who doesn’t appreciate his technical proficiency needs to go home and learn how the guitar works. LOL, just kidding. You see, even the most talented axemen look up to Becker’s skills and talent.

“To call Jason a genius is an understatement. He doesn’t cater to trend, target audiences, marketing gimmicks or anything like that. He plays out the emotions from his heart and makes real music that is a salute to the human spirit. Jason is a prodigy and on ‘Perspectives’ he realizes his miraculous potential.” – Marty Friedman

You probably already know that he was diagnosed with ALS, or Amyotrophic Lateral Sclerosis (also known as Lou Gehrig’s Disease) at the age of 20. But still, that didn’t stop him from making music even though he can no longer play the guitar and also made him unable to speak. Late last year, it was announced that he was working on a new album.

The amount of talent he has is second to none. It just oozes out of his fingers. Some people just play the guitar, Joe Satriani does it on a whole another level. You only need to listen to one song to get hooked to his music. The technique is impressive and to be honest, it just blows you away. Sometimes, I even have to check myself while watching his solos because I almost always end up with my jaw on the floor.

“Hearing Jimi Hendrix as a little kid and falling in love with everything that he did on guitar rewired my basic nature. To me, that was a normal thing that you should do: you should strive to be as innovative as Hendrix. I would always think, “Well, how would Hendrix approach something like this?”” – Joe Satriani

He is certainly one of the greats. But another thing that made him a significant figure in rock was the fact that he was the mentor of other iconic guitarists like Kirk Hammett and Steve Vai.

He somehow makes KFC Chicken bucket look good. But to be fair, you can pull off absolutely anything if you’re even half as good as him. I watched this solo and I can’t help but feel pity for that guitar – it must have retired after this performance. That was hands-down insane.

“From his prolific solo work, to his prominent memberships in the supergroup Praxis and rock legends Guns N’ Roses, Buckethead has displayed one of the most fiery creative personas of our times, and has continually affirmed his stance in the upper echelon of contemporary shredders.” – Gibson

One thing that separates Buckethead from other shred guitarists (apart from his stage presence and whole mysterious persona) is his versatility. He can go from one genre to another and his guitar playing is still off the charts. Just check out the clip – it’s manic but coherent and tight. There’s no need to explain why he landed a spot on this list.

He’s a show off, that’s for sure. But with skills like that, who wouldn’t want to showcase it using a variety of guitar showmanship? It doesn’t matter if he’s using a multi-necked axe or that his fingers are lightning fast. The thing is, few can match or even rival just how outstanding this shred guitarist is. There’s really not much to tell – it’s one of those you need to see for yourself.

“But here’s my way of doing it — and it’s not everybody’s way — I do not care for amp distortion. To me it’s not clear. I get a really clear sound. It’s articulate, every note can be heard. That’s on purpose. I don’t want it to sound like a bunch of noise. When I play fast I want every note to be heard.” – Michael Angelo Batio

If there’s one thing to learn here, it’s Batio’s straightforward no-nonsense approach to guitar playing. And that’s what makes him great.

It’s out of this world. And my only consolation is that I lived in the same era as John Petrucci. Leave it to him to incorporate a wide variety of techniques and impressing you with his insane skills in just under a minute. I guess it’s safe to assume he’s a legit guitar god.

“I would say my introduction to prog-rock occurred when I heard Yes. When I was growing up and getting into music, I was listening mostly to rock – Zeppelin, AC/DC, Sabbath. It’s usually the older brother of a friend who introduces you to something new, and that’s the way it was for me. ‘You gotta hear this!’ my friend’s older brother said, and he held out a copy of Fragile.” – John Petrucci

He always makes it to various lists of the best shredders of all time. And it’s really no wonder why – he’s a real beast on the guitar.

The name speaks for itself. Perhaps everyone would agree (or not) that we all want to shred like Eddie Van Halen. The power, the intensity and the exhilarating energy – it’s like everything’s boundless. If he only had one shot to show off, this piece would still propel him to superstardom and secure his place in the rock pantheon.

“We recorded our first record on Sunset Sound in Hollywood, and we were warming up for a weekend gig at the Whisky. And I was just rehearsing, and [engineer] Donn Landee happened to record it. It was never planned to be on the record. So the take on the record was a total freak thing. It was just an accident. He happened to be rolling tape.” – Eddie Van Halen on Eruption

Watching him shred that solo somehow makes me nervous because I kept on waiting for steam to start coming out of the strings. But that wouldn’t even be surprising anymore.

Whenever you lose your motivation, take a page from Steve Vai’s book. His story is one that will surely inspire you to follow your dreams. From taking Joe Satriani’s guitar lessons at 14 to jamming with him at Vai’s studio – he went from student to peer. And he knows how to give back too! He once held the world’s largest online guitar lesson with 4,455 students.

“I think Hendrix influenced me more spiritually than anything else. His whole approach was so inspiring. Just his feel, spiritually, of what he was doing is what sent me. He was doing it instinctively with no precedent or no other examples to copy. You never really heard anyone else who sounded anything like him.” – Steve Vai

Everything he does is magical. And there’s no question why he’s easily one of the top five shred guitarists of all time. Even Frank Zappa was so impressed with his skills!

His technique is out of this world and when he plays, he leaves everyone in the dust. It’s just seriously complicated that he’s often imitated but NEVER duplicated. I could stare at his solos all day long – it’s enchanting like that. It’s fast but fluid, not all over the place. Sometimes, it’s even hard to keep up with the speed! And it’s not just how his fingers look like lightning but it’s also how much feel he has whenever he plays.

“I don’t have any “strategies.” What I’ve done from the very beginning is play everything with extreme accuracy. I never said to myself, “Okay, if I put my fingers this way, it’s gonna result in this.” I’ve never taken a lesson. My way of playing the guitar was a fresh approach to the instrument.” – Yngwie Malmsteen

Some say he’s overrated and while I agree, he definitely deserves all the credit.