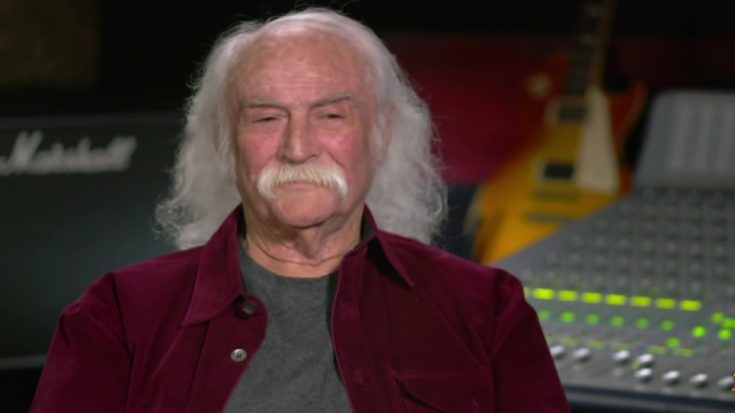 David Crosby’s large contributions to music became mainstream all thanks to being a part of Crosby, Stills & Nash (sometimes with Young). Crosby helped in shaping the face of music, providing songs that went down in history, much like any other legendary artists do. We’ve known him for his long and outstanding song catalogs but we’re ready to present to you these 10 David Crosby facts that most die-hard fans might not know about. Enjoy!

He was a part of The Byrds

Before CSNY, Crosby has credited his old band The Byrds as the reason for his rise of fame in music. Some of the singer’s old-time classic hits were from his olden Byrd days such as “Eight Miles High.”

He’s A Fan of The Everly Brothers

The Everly Brothers, one of the pioneers of vocal harmonization in music, greatly influenced the young Crosby to pursue the same type of style in his songs.

Turns out it’s an inherited desire in the Crosby family to be famous. David’s father, Floyd, was an award-winning cinematographer best known for his work on the movie High Noon (1952).

The politically-charged “Wooden Ships” was written by both Crosby and Stephen Stills, but it turned out to have one more secret contributor: JA’s Paul Kantner. Kantner was erased from the recognition due to his legal reasons at that time.

He Credits Bob Dylan As a “Major Poet”

Albeit his dislike of Bob Dylan’s voice, he respects the legend and his approach to music that influenced generation to generation. He called Dylan “one of the major poets of our time.”

He Respects Paul McCartney on Bass

Crosby played bass during his early Byrd days but found it to be “extremely difficult” while singing. In his autobiography Long Time Gone, he explained that playing the instrument while on singing duties is like “being able to dial two telephones at once with both hands. All credit to Paul McCartney,” he wrote.

As a musician who primarily composes on guitar, one of the tips he loved to do is to write all the ideas down, even if it’s just one or two chords yet. This helpful tip came from Joni Mitchell when she complimented Crosby’s songwriting but warned him to “write your sh** down!”

He had Fun “On An Island” with a Pink Floyd member

Both Crosby and fellow CSN member Graham Nash participated in vocal harmony duties to David Gilmour’s “On An Island” song released on the album of the same name. Listen to it below.

When rock star Melissa Etheridge and her then-partner wanted to jump to another level and wanted kids through artificial insemination, they asked for help from their good friend, David Crosby. The identity of the donor was anonymous at first until it was confirmed by Etheridge herself.

He Witnessed an Unforgettable Moment Between Jim Morrison and Janis Joplin

At a party joined by the three, Crosby recalled an experience between Morrison and Joplin when Morrison told the latter singer that he didn’t feel like she could sing the blues. Joplin didn’t like Morrison’s criticism that she picked up a bottle and smashed it on Morrison’s head. Talk about nerves!