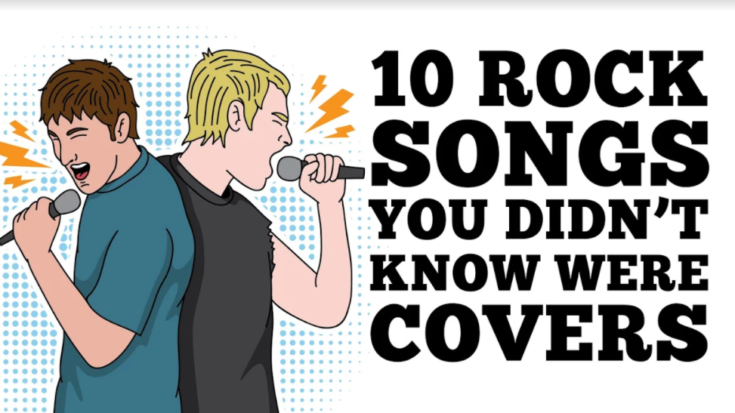 It’s not unusual for artists to reimagine songs and make it their own. Take Joan Jett’s “I Love Rock ‘n Roll.” Some people know it’s a cover version but it was such a huge hit for her that other fans were convinced she’s the original.

It’s a bit of a bummer when you realize the song you love so much, the one you’ve been singing in the shower or air-drumming to is a cover. It’s a big OOPS moment. Still, let’s give them the credit they deserve – it’s not easy making your own rendition based off another artist’s track especially if it sounds more kick ass. And more often than not, they’re paying homage to the original musician.

Besides, it’s not just you. It’s pretty common actually which is why we rounded up some of the lesser-known cover versions here. You may already know some but who knows, others might surprise you.

Written by Johnny Cash’s second wife, June Carter along with Merle Kilgore, it was originally recorded by June’s sister American singer Anita Carter. The song was featured in her 1963 album with Mercury Records, “Folk Songs Old and New” and was also released as a single.

“Ring of Fire” is about June’s burning love and happiness with Johnny. There’s a bit of an issue here though because according to Johnny’s first wife Vivian Liberto in her book, it wasn’t June who wrote the track but Johnny.

“To this day, it confounds me to hear the elaborate details June told of writing that song for Johnny. She didn’t write that song any more than I did. The truth is, Johnny wrote that song, while pilled up and drunk, about a certain private female body part. All those years of her claiming she wrote it herself, and she probably never knew what the song was really about.” – Vivian Liberto

It was a big hit for Anita so Johnny recorded his version but he added trumpets to the sound,and  it topped the U.S. Billboard Hot Country Singles. In addition to the “horns,” Johnny also modified some of the phrases.

The Quiet Beatle George Harrison had three #1 singles in the US – but the only one which he didn’t compose is “Got My Mind Set On You.” It was a massive success for George and it confirmed what we already knew – that he was on the same level as fellow Beatles John Lennon and Paul McCartney (both only had two #1 as solo artists).

But George’s version is only a cover. The song was originally recorded by African American R&B singer James Ray.

“I think a lot has been written about how John was the big hero. Paul certainly said [Lennon] was our own Elvis. Well, we certainly liked him and loved him like that, but we were all hot to trot.” – George Harrison

The Beatles also covered another James Ray classic – “If You Gotta Make a Fool of Somebody.” And it was in 1963 when George bought a copy of his album and that’s where he discovered “I’ve Got My Mind Set on You.”

Are you surprised there are still people who believe The Animals were the original artists? Yep, it’s true. It’s the most commercially successful version which is probably why. It’s a traditional folk song so no one’s exactly sure who wrote it. One of the earliest recordings was by folk singer Woody Guthrie way back in 1941.

Other musicians who covered it before The Animals include Lead Belly, Joan Baez and Nina Simone.

“House of the Rising Sun’ is a song that I was just fated to. It was made for me and I was made for it. It was a great song for the Chuck Berry tour because it was a way of reaching the audience without copying Chuck Berry. It was a great trick and it worked. It actually wasn’t only a great trick, it was a great recording. The best aspect of it, I’ve been told, is that Bob Dylan, who was angry at first, turned into a rocker. Dylan went electric in the shadow of The Animals classic ‘House of the Rising Sun.’” – The Animals’ lead singer Eric Burdon

Maybe because they’ve been playing it live that’s why recording the song only took one take. As expected, it was a huge hit for them and remains so today thanks to its regular use in TV shows.

Rod Stewart’s “Downtown Train” shot up to the #1 spot in the Canadian Singles Chart, US Billboard Adult Contemporary and US Billboard Album Rock Tracks. It was a last-minute addition to Disc Four of his compilation “Storyteller – The Complete Anthology: 1964–1990.” They probably didn’t expect it to be a huge hit.

However, contrary to what other people think, this isn’t a Rod Stewart original. It was Tom Waits who wrote and originally recorded the song for his eighth album “Rain Dogs” which was released in 1985.

“I’m sure Tom Waits wouldn’t mind me saying this – Tom’s ‘Downtown Train,’ I realized there was a melody there in the chorus, and it’s beautiful, but he barely gets up and barely gets down to the lower notes, so I took it to the extreme. That was a case where I brought the chorus alive and there have been a couple like that.” – Rod Stewart

This is another Tom Waits original covered by Bruce Springsteen. It was from Tom’s sixth studio album released in 1980, “Heartattack and Vine.” It also appeared in several of his compilation albums. It’s perhaps his most romantic tune and he penned it for his then-future wife.

Bruce started playing the cover live with his E Street Band before recording the song in 1984. He modified the lyrics a little bit by singing “the girls out on the avenue” instead of “whore out on Eighth Avenue.”

“There’s a guy that’s written a lot of great songs like ‘Ol’ 55,’ ‘Heart of Saturday Night’ and this song. I remember it was one of those songs I said, ‘Well, I wish I’d wrote that.’” – Bruce Springsteen

During Bruce’s tour in 1981, he performed it along with Tom Waits. Unfortunately for us, there’s no clip or any footage from that glorious duet. And just late last year during Bruce’s concert, a man proposed to his girl with no less than The Boss singing “Jersey Girl” in the background.

Sonny Curtis wrote this a year before taking Buddy Holly’s place as a member of The Crickets. The band recorded it in 1959 but it was only a local hit. Due mostly to receiving zero airplay, it failed to chart. In 1965, the song became a massive success for American rock & roll band The Bobby Fuller Four. However, even if they managed to break into the US Billboard Hot 100 and peaked at #9, a few months later, Bobby Fuller was found dead in his car.

In 1979, The Clash recorded their version for “The Cost of Living.”

“We’re still the only ones true to the original aims of punk. Those other bands should be destroyed.” – Mick Jones

The Clash made their rendition darker and more ominous by modifying “I left my baby” to “I killed my baby.” “I Fought The Law” was also the first single they released in the US.

You’d be surprised to know that there are still people who think this classic is a Quiet Riot original. Sadly though, that’s just a cover version. Originally recorded by Slade, it was a big hit for them and it gave them their fourth #1. And after 3 weeks, sales went up to 500,000 copies.

In 1983, Quiet Riot’s rendition was also a chart-topper and even earned them a gold record status. It ranked at #41 on VH1’s “Best Hard Rock Songs of All Time.”

“The thing is, when you listen to the original Slade version and you listen to our version, Slade begins at a different part of the song. Slade did not have an intro – it just goes right in. And because we weren’t familiar with the song – and I definitely wasn’t familiar with the song – I think I either left out a verse or a chorus in our arrangement. So if you play them side-by-side, they’re not going to match.” – Quiet Riot’s Frankie Banali

This isn’t the only Slade song Quiet Riot covered. They also recorded their own version of the 1972 single “Mama Weer All Crazee Now.”

Warning: this will most likely leave everyone (okay maybe not all) dazed and confused. To be fair, some already know Led Zeppelin isn’t the original artist. The thing is, they think it’s The Yarbirds which is still wrong.

It was written and originally recorded by Jake Holmes back in 1967. He was opening for The Yardbirds when Jimmy Page heard the song. Back in 2010, Holmes filed a case against Page and Robert Plant and sought for $1M in damages because only Page was given the credit as the songwriter. The case was dismissed two years later.

“That was the infamous moment of my life when Dazed and Confused fell into the loving arms and hands of Jimmy Page.” – Jake Holmes

“Dazed and Confused” remains a classic tune and it was a real fan favorite when the group was still touring and performing live. It also appeared in several compilation albums.

If at one point you thought “Twist and Shout” was another Lennon-McCartney collaboration, don’t worry because you’re not alone. We thought the same thing actually. So when we found out it was a cover version, imagine our surprise.

“Twist and Shout” was originally recorded by R&B group The Top Notes. Then of course came The Isley Brothers who enjoyed their very first top 20 hit thanks to this song. But while it was a major hit for the trio, nothing prepared for the success of The Beatles cover especially with John Lennon giving it his most incredible throat-shredding performance ever.

“The last song nearly killed me. My voice wasn’t the same for a long time after; every time I swallowed it was like sandpaper. I was always bitterly ashamed of it, because I could sing it better than that; but now it doesn’t bother me. You can hear that I’m just a frantic guy doing his best.” – John Lennon

It was featured in The Fab Four’s first UK album which they finished recording in just 13 hours. And even with John suffering from a cold, his voice still sends chills down our spine. It’s a real masterpiece.

This one’s pretty interesting. The earliest known recording of “Hey Joe” was by folk singer-songwriter Billy Roberts. And in fact, the song is registered for copyright in the United States under his name. However, musician Tim Rose claimed that it’s a traditional tune although there’s no solid evidence to back it up.

Nevertheless, after seeing Roberts perform “Hey Joe” numerous times, other bands began recording their versions – The Byrds, The Leaves and The Music Machine. Chas Chandler discovered Jimi Hendrix while he was playing the slower arrangement of Tim Rose.

“[‘Hey Joe’ had] been out for eight months or so and had never been a hit. I said, ‘Wow, I’m gonna find an act and record that song in England. That’s going to be a hit.’ When I saw Jimi Hendrix at the Café Wha? in Greenwich Village, the first song he played was ‘Hey Joe.’” – Chas Chandler

It was a huge success for Jimi Hendrix and most people associate the song with the guitar god. It became more memorable since it was the last track played by Jimi in Woodstock ’69 and the final song that closed the entire music festival.